More on York as capital 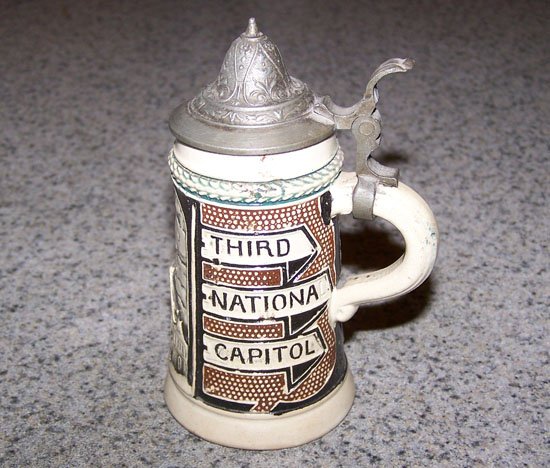 For my December York Sunday News column I looked at the claim by some that York was the nation’s first capital, usually citing the adoption of the Articles of Confederation by the Continental Congress while meeting here from September 1777 to June 1778. (See below for a repeat of that column.)

My conclusion was that, before a 1961 campaign by the Colonial York Tourist Bureau started promoting “HISTORIC YORK, PA, FIRST CAPITAL OF THE UNITED STATES,” it was pretty well accepted by scholars and the general public that York was the fourth capital. The First Continental Congress met in Philadelphia during September and October 1774. The Second Continental Congress assembled in Philadelphia from May 1775 to December 1776, in Baltimore from December 1776 to February 1777, then back to Philadelphia from March 1777 to September 1777. The British were coming, so the congressmen went west, meeting in Lancaster for one day, September 27, 1777, before moving on to York for their stay from September 30, 1777 to June 27, 1778.

The “First Capital” idea picked up more advocates during the United States Bicentennial, when the Colonial Courthouse replica was constructed. It caught on, and since then more than 20 local businesses have used “First Capital” or “First Capitol” in their name.

So far, I know of only object naming York “First Capital” before the 1960s. That was a 1912 calendar plate shared by fellow blogger Stephen H. Smith. It shows the Colonial Courthouse as it probably looked when Congress met there. Why that plate was issued is a mystery. 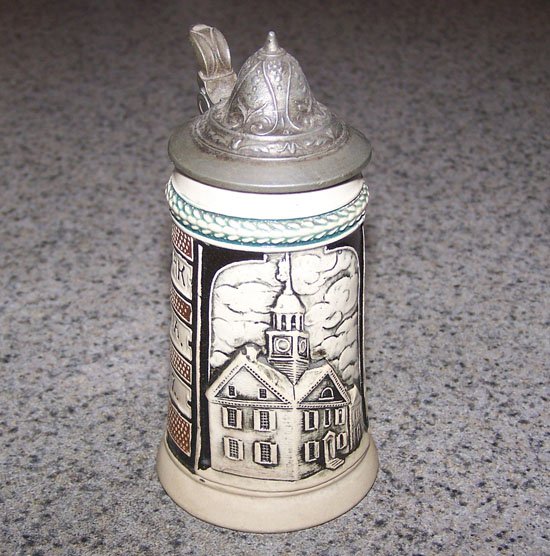 Now some readers have graciously shared photos of the miniature (4 ½ inches high) beer stein above that was passed on by his great-grandmother, who collected antiques. It depicts the Colonial Courthouse, probably based on an 1830 William Wagner drawing that shows the cupola and front and back gables that were added to the 1756 building in 1815. The bottom is stamped “Germany” and the number “6003” is below the handle. 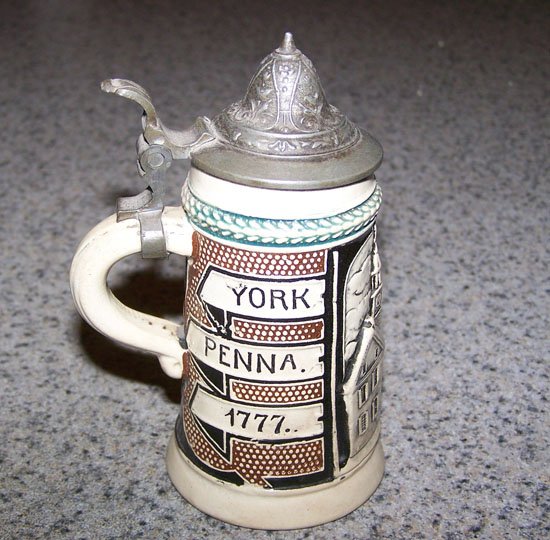 This mug isn’t dated, but it sounds like it has some age on it. The “Third National Capitol” is puzzling. Did whoever commissioned it perhaps skip Lancaster because Continental Congress only met there for a day?

Do you know of any other items commemorating York as the first (or third) capital that might date before the 1960s tourism campaign? If so, you can contact me at ycpa89@msn.com.

“What is this “York, the First Capital” all about?

Does York, Pa. have any claim to being the First Capital of the United States, and if not, why do we keep hearing it is? Why do over twenty York County businesses have First Capital (or Capitol) as part of their names?

Scholars have been writing for years that York was the fourth capital of nine, after Philadelphia, Baltimore and Lancaster. Princeton, Annapolis, Trenton, New York and Washington came later. Germantown, Pa. is sometimes included as a tenth seat of government, since President Washington and his cabinet met there during a 1793 yellow fever outbreak in Philadelphia. A good book on the subject is The Nine Capitals of the United States (1948) by Dr. Robert Fortenbaugh, long time professor and head of the history department at Gettysburg College. It is referenced on the U.S. Senate website and lists York as the fourth capital.

The major published histories of York County: Carter and Glossbrenner (1834), Rupp (1845), Gibson (1886) and Prowell (1907) cover Continental Congress meeting in York from September 30, 1777 to June 27, 1778 with no claims of York as First Capital. York County celebrated the Sesquicentennial of York being capital in a big way in 1927-28, but no First Capital claim seemed to come up then.

From what has come to light so far, with one exception, early seeds were planted in two Chamber of Commerce books, published in 1946 and updated 1957. They feature local businesses, but history sections make the claim that the term “United States of America” was first used in York, when Congress adopted the Articles of Confederation here on November 15, 1777. These first two books did not mention a First Capital claim, but a third similar Chamber of Commerce book in 1968 made the leap that York was the First Capital because of that November 1777 adoption. Much public relations work had been going on in the meantime, as outlined below.
In 1961 the Colonial York Tourist Bureau issued a set of 25 stamps, each showing a York County historical site. Each red and gold stamp was labeled “HISTORIC YORK, PA. FIRST CAPITAL OF THE UNITED STATES.” An accompanying brochure Stories of the Stamps, signed by CYTB President Fred J. Bailey, says “Generous purchase of Historic York stamps will help raise the funds necessary to tell more Americans about our beautiful and historic landmarks.” He suggests they be used on letters, packages, stationery and letterheads, saying: “Remember, every stamp sold will help us toward nationwide recognition of York’s important place in America history.”
Files at YCHT contain considerable information on this promotion, including a July 22, 1961 York Dispatch article headlined “FIRST U.S. CAPITAL TAG MAY PRODUCE WIDE CONTROVERSY.” The article points out that most histories and school books give either Philadelphia (where the Declaration of Independence was signed) or New York (first capital under the U.S. Constitution) credit as First Capital. CYTB President Bailey says Continental Congress had no status under law until the Articles of Confederation were adopted in York. He puts importance on the engrossed Declaration, the fancy handwritten one signed by the delegates, having “united” not being capitalized before “States.” Others have used that argument, saying it meant only that the states were working together. They either ignore or are unaware that the original Jefferson handwritten draft, and the subsequent Dunlap printed broadside both have the UNITED STATES OF AMERICA in all capital letters in the first line, with Jefferson’s draft using United States of America and in the last paragraph and Dunlap repeating all capitals. (The scrivener of the engrossed copy used only one form of contemporary capitalization.) Bailey was also aware of the September 9, 1776 Congress resolve to use United States instead of United Colonies, but dismissed it as irrelevant. Perhaps he didn’t also know that paper currency printed in Philadelphia in May 1777, before Congress moved to York, replaced the previously used United Colonies with United States. The research for the advertising program is said to have been done by Bailey and the head of a local ad agency. Correspondence by Historical Society of York County (now part of York County Heritage Trust) staff with others wondering about this First Capital label indicate some viewed the campaign as being more concerned with attracting tourists than relating the truth.
In 1963 HSYC President Robert P. Turner wrote a response to an inquiry from Wendy Nielson, Constitution Hall, Philadelphia, enclosing a press release from the local ad agency showing “the rationalizing of our Tourist Bureau on the subject of York’s being the first capital of the United States.” Turner closed with “Please note also that this document [the press release] is the brain child of the Tourist Bureau.” Evidently the First Capital term was puzzling others.
The stage was set for more proliferation of the title in the next decade. After checking city directories and phone books, the first instance I can see of a business joining in was the First Capital Service Corporation, a mortgage loan company in the Shiloh area in 1972. The next was in 1976 with the First Capital Dispensing Company, a bar and grill still in business on Pershing Avenue. By then, the second major factor in the First Capital story came into play. Joining in on the United States Bicentennial, the York County Bicentennial Commission produced books, programs, and the most lasting memento, the replica Colonial Courthouse in which Congress had met. That building is now part of YCHT, and can be toured most of the year. With those projects came renewed vigor for York as First Capital. Judge John Rauhauser, President of the Bicentennial Commission penned a pamphlet for the commission The Secret History of the Birth of the Nation. His strong stand is that the United States of America did not exist until the Articles of Confederation were adopted in York on November 15, 1777, and that action, not the March 1781 final ratification by the 13th state, made York the First Capital.

My opinion is that York was the fourth capital of the United States, agreeing with most scholars, and, in fact, with most laypeople until the second half of the twentieth century. Much more can be found on the subject in the YCHT files and many online sites.”