More on the Hessians of Lewis Miller

My last blog post noted that the book featuring York folk artist Lewis Miller’s drawings of “Hessians” that settled in York County after the Revolutionary War is once again available at the York County History Center, long after it was thought out of print.

The book features 22 full page portraits, each in full color and a size suitable for framing. It was recently discovered that the Johannes Schwalm Historical Association still had some copies of the book, originally jointly published by the JSHA and the Historical Society of York County (forerunner of the York County History Center.)

Each portrait faces a page of biographical information on the individual, with most of the research done by Yorker Jonathan Stayer, now head of Reference at the Pennsylvania State Archives.

One or more of these subjects might be your ancestor. Even if they are not, the portraits and text give insights of life in York County in the late 18th and early 19th century. The descriptions give information on their military service, residences and family connections (see below). The example shown here, Hattendorf, was probably captured at Trenton; later he followed the trade of plasterer, and shown by his plasterer’s trowel and rag, and he settled in York.

Likenesses of more local citizens can be seen in Lewis Miller’s People (2014), edited by Lila-Fourhman-Shaull and me.  It too is also available from the York County History Center. 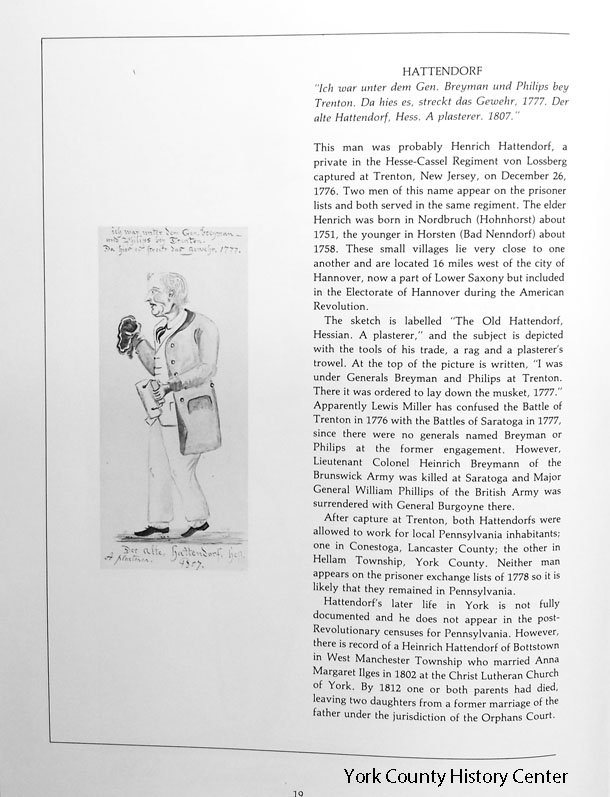