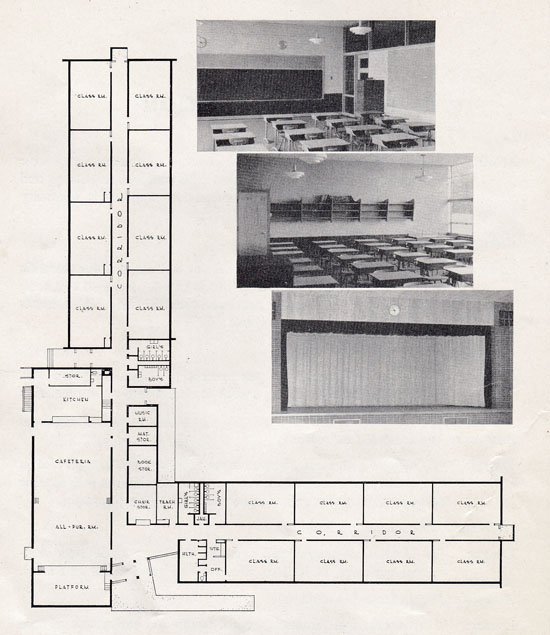 York County Heritage Trust Director of Library and Archives, Lila Fourhman-Shaull, shared a dedication program for Chanceford Elementary School with me. As noted in my previous post, the school was dedicated on August 31, 1958.

The program gives a history of public education in Chanceford Township. Many school districts were consolidating their one-room schools into modern elementary schools during the 1950s and would have a similar history, except for the names of the individual schools being closed. The history page of the program reads, in part:

According to available information there were three schools in the township prior to the Revolutionary War. When the Public School Law of 1834 went into operation there were five school houses in the township. These schools were supported by public subscription and such small aid as the state gave for the tuition of indigent pupils. Late in 1834 a convention of York county delegates met to decide what action would be taken concerning the Public School Law, which was passed earlier that year. A majority of the delegates, including the Chanceford Township representative, James H. Smith, voted for acceptance of the provisions of the Public School Law. [Chanceford was one of the few townships to implement the law right away; some other York County townships didn’t adopt the public school system for decades.]

In the year [1886] there were sixteen schools in the township, and by 1907 this number had increased to eighteen schools: Battle Hill, Bethel, Brogue, Clearview, Collinsville, Conrads, Dellingers, Gipes, Glen Allen, Guinston, Hickory Grove, Millers, St. James, Shaws, Shenks Ferry, Thompsons, Trinity and Weisers. Of these, four schools were closed between 1927 and 1954: Hickory Grove in 1927, Millers in 1930, Bethel in 1947, and Clearview in 1954. Many of us will recall that the Bethel school was destroyed by fire on Labor Day 1946, after which those pupils were transported to Shenks Ferry.

[The program credits Gibson’s History of York County [1886]for the list of early schools.]

The floor plan in the dedication booklet shows 16 classrooms, probably two each for grades one through eight. Kindergarten would not have been inaugurated there yet, and the students would go to Red Lion Area High School for their ninth through twelfth grade education.

Teachers listed for that first year at Chanceford were: Mrs. Ruth Crowl and Mrs. Mildred Scott for grade one, Mrs. Carrie Runkle and Mrs. Pauline Trout for grade two, Mrs. Louella McLaughlin and Mrs. Jane Ruff for grade three, Mrs. Ruth Crawford and Mrs. Jacob Jones for grade four, Mr. Ray Walker and Mrs. Laura Murrow for grade five, Mr. Walter Gipe and Mrs. Naomi Buecker for grade six, Mrs. Cecil Dunbar Jr. and Mr. William Felty for grade seven and Keith Robinson for grade eight. For some reason Mrs. Mildred Knisely, who I would have thought would have been the second teacher for grade eight, is listed as Ungraded. Possibly some of my Chanceford friends can fill me in on why— perhaps she had additional duties? Most of the teachers would have probably taught at the one-room schools in the township before consolidation.