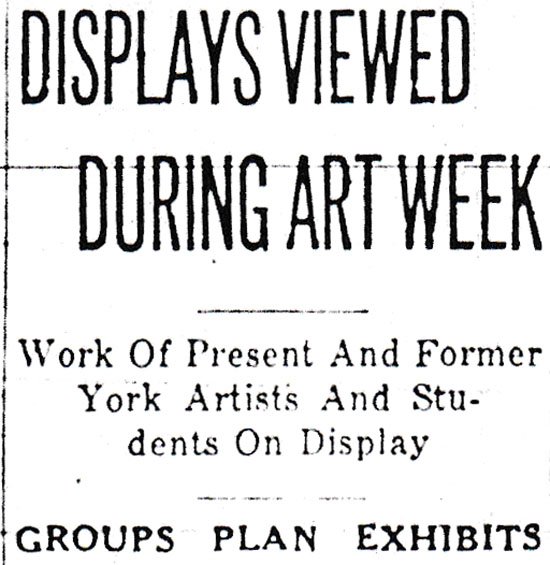 My last post listed all the artwork, mostly paintings, displayed in downtown York storefront windows during National Art Week in 1939. It caught my eye since The Parliament arts organization is promoting a similar venture, utilizing vacant display windows.

A catalog entry for the Smithsonian Archives of American Art references papers from National Art Week from Washington State in 1940 and 1941. We know from the Gazette and Daily articles that is was being observed here in 1939, and an online article from an Alexandria, Louisiana newspaper tells about their National Art Week events in 1938.

Some other countries, such as the Netherlands and Saudi Arabia, seem to be currently observing their own National Art Week. The United States now commemorates Arts in Education week, established by a 2010 resolution passed by the House of Representatives.

York artists, artists of former residence in this city and students of the York Public school system are displaying their work of the past year this week, in observance of National Art week, which opened Wednesday. Over thirty paintings in oil, water color and pastel of artists of this city and those who formerly resided here have been placed in downtown store windows in connection with the national observance.

Students of a number of schools of this city have prepared displays in their respective schools, exhibiting their works of the past year. A number of assembly periods were scheduled in various schools with the theme centered about art.

The second of a series of art displays sponsored by the York Club of Printing House Craftsmen will be shown at the Martin library November 14 to 22, inclusive. At that time the work of Holmes I. Mettee, noted photographer of Baltimore, will be on exhibition for the benefit of the general public. The officials of the Printing House Craftsmen have invited all persons to visit the exhibition and study the technique of the photographic art.”

Art is alive and well in York County. We are very fortunate to have such a thriving local arts community, as well as to live not more than a few hours from justifiably world famous museums in Baltimore; Washington, DC; Delaware; Philadelphia and New York. Go and enjoy.