More on Lewis Miller and the York County Jail 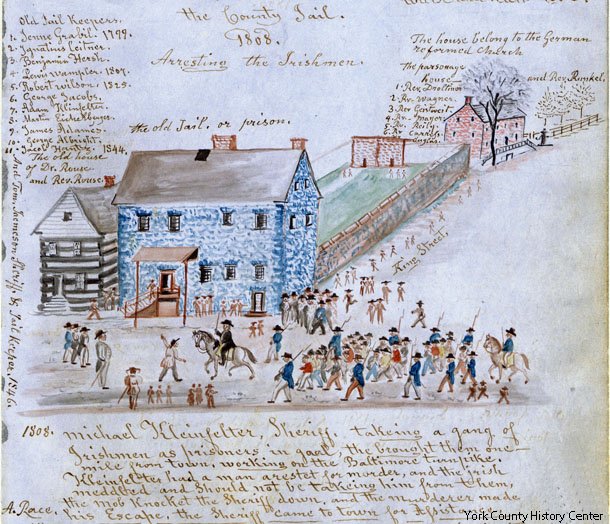 In a recent York Sunday News column I used Lewis Miller’s carpenter work on the 19th century York County Jail, which stood on the northeast corner of George and King streets,  to illustrate that you can tie together several sources to paint a more complete picture of the past.

When I posted the link to the blog post and the column on the Retro York and Preserving York groups on Facebook, I received several comments about the Lewis Miller drawing that I used with the column and post. Here is a larger portion of the drawing, from the York County History Center collections, showing more of the neighborhood. Miller gives details of the 1808 incident of “Arresting the Irishmen” that inspired him to draw the jail, and also lists the York County jail keepers from 1799 to 1846. Miller describes the incident:

Michael Kleinfelter, Sheriff, taking a gang of Irishmen as prisoners in goal, the[y] brought them one-mile from town, working on the Baltimore turnpike. Kleinfelter had a man arestet for murder, and the Irish meddled and should not be taking him from them. The mob knocket the Sheriff down, and the murderer made his escape, the Sheriff came to town for assistance.

The picture shows ten armed men on foot, five on each side, escorting a group, probably the Irish road workers who had helped the alleged murderer escape. A man on a horse, most likely Kleinfelter, leads the party to jail, and another mounted man brings up the rear.

Along the left side Miler lists the “Old Jail Keepers: