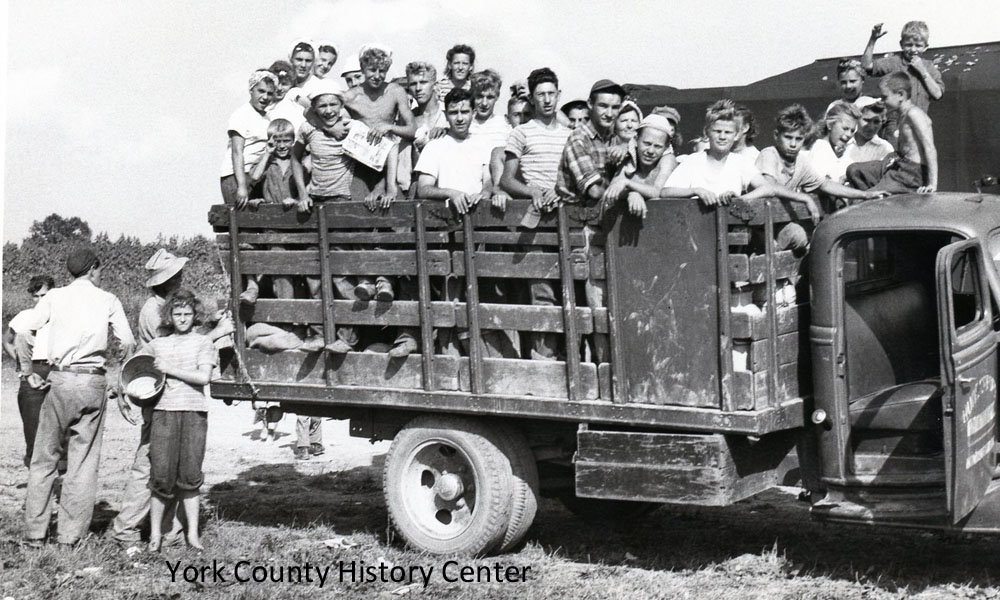 I started working on my April York Sunday News column, which you can read below, about two months ago.  We were just starting to hear more about COVID-19 then.  By the time it was finished and published in the paper a couple of weeks ago, it became even more relevant.  One thing it underscores is that our area is a rich agricultural area, capable of producing much more harvest than can be done without some outside labor assistance.

Look for the rest of the Gazette and Daily photos from the 1948 article in my next blog post.  The originals are now part of the York County History Center collection.   Here is the column:

The Changing Faces of Migrant Workers in York County

Growing up in rural Chanceford and Windsor townships during the heyday of canning factories, I remember migrant workers.  They came to harvest the vegetables that fed those factories so that York County could help feed the country.  We often drove by a migrant worker camp, a couple stark cement block buildings, on the way to visit one relative or another.  I didn’t realize until I started searching newspapers that it had been the center of a court case pitting neighbor against neighbor.

It is not clear when local farmers started using migrant labor.  By the early 1940s, Women’s Missionary societies of local churches were showing concern for migrant living conditions.  Then in August 1943, the middle of World War II, the county office of the Pennsylvania Employment Service put out a plea for local youth, housewives and people with regular jobs to help with food processing in any extra time they had.  They said that the farmers couldn’t depend on migrant labor this year, because many of those workers were now in war plants making items such as bomb sights.  It was pointed out that processed food was also a necessary weapon of war.  (Existing records show that York County canning houses, even one in Chanceford Township’s miniscule Lucky, canned vegetables for the government to feed the troops.)

One harvest labor solution was found in 1944.  In August a Gazette and Daily reporter and photographer visited two camps of Jamaicans.  About 125 were housed in cottages in a grove owned by Fawn Grove canner James Smith.  An unspecified number were lodged in the Brodbecks band hall.  Individual farmers contracted out the number of workers each needed.  As British subjects, “agricultural work in the U.S. was presented to them as a patriotic means of helping in the war effort.”

The Jamaicans, who would stay until about October 1, were well organized, and local residents commented on their being honest, polite and religious.  There was a recreation tent at the Fawn Grove site, with activities such as debates.  Local people were invited to come Thursday evenings for a program of native dancing and music.  (It is also noted that “A minstrel show from Baltimore is booked for the near future.”)

By 1948 the war was over and commercial canning was booming. The August 20 Gazette and Daily published an article with the sub-heading: “Migrant Worker Important Cog Each Season.” An accompanying full-page spread of seven photos around the Hungerford Packing company shows bean pickers in the field and the back of a stake truck packed with over 30 individuals returning from the fields. Other photos show young people washing up outside and children playing in front of their white-painted concrete housing, reminiscent of early small motels.

What shocked me was that these workers are mainly children, elementary age up through teenagers, and women.  The accompanying article explains that there are 600 migrant workers harvesting local produce at this time.  They come for three months each year to harvest wax, green and lima beans; tomatoes and corn.  Some might also skin tomatoes in the factory.  The work day is from seven a.m. to six p.m. Most of these workers are from Baltimore and are of Polish descent.  The fathers stay in Baltimore, working at full-time jobs, and visit weekends.  Their quarters are small, with families each having one or two rooms, occasionally more for a large family.  The article says workers range in age from eight to the high-seventies, but one twelve-year-old told the reporter that this was his sixth season.  He said this year he, his mother, four brothers and three sisters are all working here.  One photo shows a four-year-old with his pet pigeon; it is hoped that he is only accompanying his family. Probably similar to other large operations, Hungerford Packing migrant workers make up 40% of their work force, including all their field workers. (The original photos are now in the YCHC collections. Look at my next blog post for the rest of the photos.)

Migrant workers were never allowed to be recruited unless local labor could not fill the bill. As manufacturing, as well as food processing, industries boomed after the war and into the 1950s, there was not nearly enough local seasonal labor to go around.  It was reported in September 1949 that 2,000 persons were working in York County canneries, plus at least 1,600, not including farm owners, harvesting crops.  The field harvesters were school youths, unpaid members of farm families, and migrant workers from Maryland.

By the early fifties, migrant workers were also coming from Puerto Rico.  Of the 400 estimated migrant workers needed in the summer of 1952, 234 were from that U.S. island.  They were often young men.  A few unfortunately made the news by getting into trouble, such as the individual from the High Rock camp who burglarized the High Rock Post Office and home of the postmaster, seeking funds to return home.

Even though crime was a very rare occurrence, that incident might have stirred three Chanceford township residents, supposedly after a meeting of 100 people at Brogue, to file for an injunction in August 1953 to stop construction of a camp to house about 150 workers to come from Florida.  The defendants were seven local growers who were the backers of the project.  After hearing a day and a half of testimony, Judge Ray P. Sherwood ruled against the plaintiffs’ claims that it would be a nuisance and lower property values.

The judge said the nuisance was only anticipated in the minds of the plaintiffs.  There were hints of discrimination, even though the plaintiffs specifically denied it.  One local farmer, who would be a user of the labor, said he was more fearful of some of his neighbors, since they were getting so nasty, than of any migrant workers.  The county Bureau of Employment Security also affirmed that migrant labor was absolutely necessary to get the harvesting done.  About a week later, the Gazette and Daily ran a very positive full-page spread on a camp of 143 young Puerto Rican men at the Summers canning plant in New Freedom.

With mechanization and some changing of crops grown in York County, I didn’t find much evidence in recent newspapers of migrant workers being needed for field crops.  Now they seem to come, mainly from Mexico, to pick fruit, especially apples.  Regulations are much stricter, with growers using well documented immigrant farm help, or those having applied under the H-2A visa program, which strictly limits how long they can stay for specific jobs.  It is more expensive and more paperwork for the employer, but they need to get the harvest done.