Maybe another clue to Camp Security? 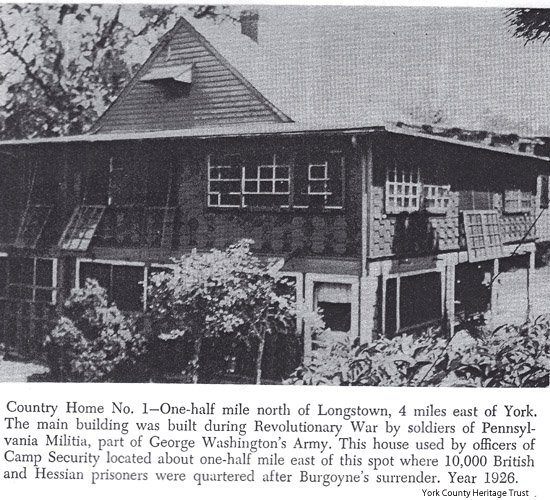 Was the building above connected to Camp Security? Twentieth century York entrepreneur, John William Richley said it might have been. In his 1951 autobiography, Obstacles No Barrier, Richley wrote:

“Bought Farm near Longstown.
In order to get my mind off my trouble [his wife had recently died] and get away from everything for a while…I bought a little farm from an old lady by the name of Mrs. Landis… . It consisted of fifteen and a half acres of ground and an old run-down, deserted one story and a half log house, which, it is claimed, was erected and built by George Washington’s soldiers, known as the Pennsylvania Militia, while the prisoners’ camp know as Camp Security was in operation during the Revolutionary War, when Burgoyne and his whole army was captured at Saratoga, New York.”

He goes on to say that the house had no foundation, that the logs were laid on large stones. He jacked it up, dug a cellar and poured a foundation. He also raised the roof high enough to build in another story and put a porch all around on both stories, so the house in these photos from his book show a much-enlarged building.

The house no longer stands. It had several owners after Richley died and eventually ended up in 1956 in the hands of developer Walter Kaltreider. One of his employees, whose wife is a friend of mine, lived there for a while, really liking the house and location. It was eventually torn down when that area, the west side of Edgewood Road going up the hill, was developed.

Could it have been a remnant of Camp Security? Perhaps–the local militia did guard the prisoners during much of the time the camp existed. Existing descriptions mention log huts housing some of the prisoners and also foundations of flat stones.

It seems to me to be too far away (about two miles) from the area that numerous artifacts have been found, and also off the property David Brubaker owned, which has been well documented as the camp site. On the other hand, buildings much larger have been moved over the years, so who knows? It is another clue and it is from many, many little clues put together that we can reconstruct our past.

As I mentioned in my previous post, you can learn more about the Camp Security of 230 years ago and what is happening to the site today by coming to hear Jonathan Stayer talk about his findings from 30+ years of research on Camp Security. Stayer’s talk will take place on Sunday, November 4th at 2:15 p.m. meeting of the South Central Pennsylvania Genealogical Society. It will be held at Good News Free Will Baptist Church, 530 Locust Grove Road, just off East Market Street in the Stony Brook area. The church is located on the edge of David Brubaker’s original 280 acre tract, part of which was the site of Camp Security. The public is welcome.

This link will take you to many of my posts on Camp Security.

And this link will take you to Camp Security related posts by fellow blogger Jim McClure. 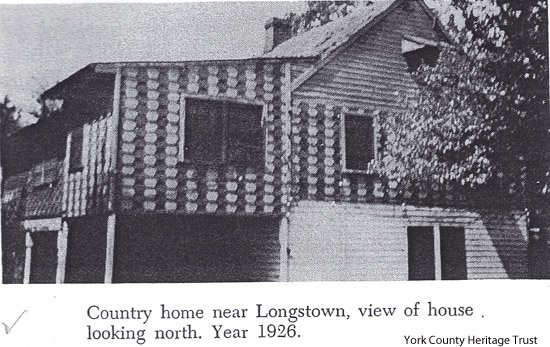