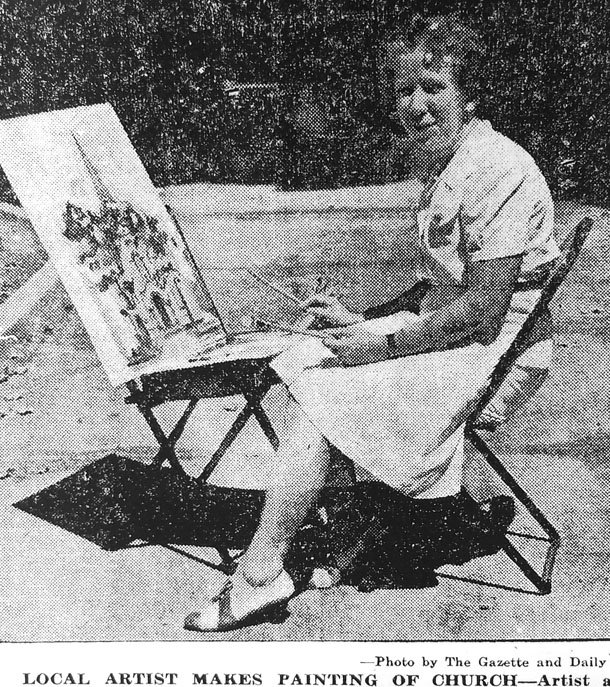 My upcoming York Sunday News column is on the popular and prolific Yorker, Margaret Sarah Lewis. York Daily Record editor and fellow blogger, Jim McClure, has already posted the column on the Retro York Facebook page. I will be sharing it soon on my Universal York blog and several other sites.

Here is an August 4, 1944 York Gazette and Daily clipping from the York County History Center’s file on Lewis creating the image. It shows her working on the painting in the bright summer sunshine.

LOCAL ARTIST MAKES PAINTING OF CHURCH—Artist at work yesterday was Margaret Lewis, assistant art supervisor of York city schools and member of the York Junior college faculty, who is making an oil painting of the First Moravian church, 41 North Duke street. Miss Lewis is the daughter of M.O. Lewis, 255 Roosevelt avenue. When asked by a Gazette and Daily reporter why the spot appealed to her, Miss Lewis replied that it was a good local scene. The trees in front of the church, she said, made an interesting effect. She added that she plans to do her art work in York this summer. She said that she preferred to paint landscapes in water color, but that she does oil portraits, wood and linoleum cuts also.

Miss Lewis has a lithographic print, showing scenes in Central market, on display at the second annual print exhibition of the Library of Congress, Washington, D.C. On traveling exhibition with well-known artists is a silk screen print which she has painted of upper New York harbor. Other places at which her paintings have been on exhibition are New York, Philadelphia, Baltimore, Pittsburgh and California.

A member of the York Art club, Miss Lewis has studies at Maryland Institute of Art, Baltimore, and Columbia University. She has taken water color painting under Millard Sheets and oil painting under James Chapin in Claremont. Cal.

Several examples are in the York County History Center museum collection, and quite a few were bequeathed to ForSight Vision by her nephew, Walter Ziegler. I believe many are still in private collections. If you have, or know of any, please email an image to me at ycpa89@msn.com or jlloyd@yorkhistorycenter.org, so that we can print them out and add the images to her file at the York County History Center. Ownership will be kept confidential.