Many Fraktur were made for York County area children 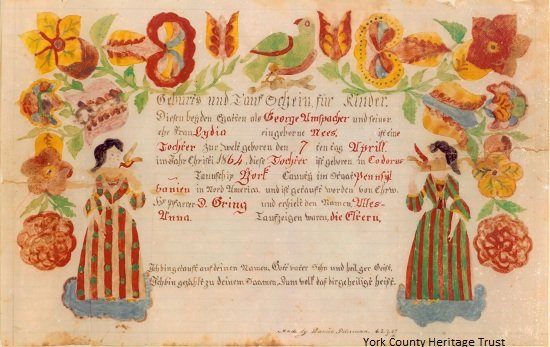 I am doing research for an article I’m writing on the prolific York County Fraktur artist Daniel Peterman, who did the certificate above. So far I have recorded 79 examples of his work. His hand-down Taufscheine (Birth and Baptismal Certificates) cover six decades of the 19th century, from the 18-teens to the 1860s.

One of the most fascinating aspects of his illustrations is that he used paired women on just about all his certificates, in place of the angels used by many Taufscheine artists and printers. As the decades passed, you can see the changes in fashion and hairstyles worn by these distinctive women.

I’ll write more about Peterman later, but to give an overview of the Fraktur artists and printers of the York County area, I’ve attached my York Sunday News column about them below.

I have recorded about 2,000 birth and baptismal certificates for children of the York County area (York and Adams counties and northern Maryland), but I am always happy to know about more that I haven’t yet recorded. A certificate you have might identify an unknown artist or maybe contain family information recorded nowhere else. I can be contacted through the blog comment section or emailed at ycpa89@msn.com.

Art has been an integral part of York County life since the early days of the county. The vast majority of York County settlers were Pennsylvania Germans who used traditional motifs of hearts, flowers, birds and angels to decorate everyday objects and the works on paper we call Fraktur. This term refers to the broken, or fractured, style of lettering combined with the colorful images on these striking examples of Pennsylvania German folk art. The best-known form of Fraktur is the Taufschein (baptismal certificate), made to commemorate a baptism, usually of an infant or small child. The great majority were made for the “church people,” generally members of the Lutheran or German Reformed denominations, for whom baptism was an important sacrament. Thousands of Taufscheine have been found for York County-area children, since the Pennsylvania Germans that settled in the York County area, geographically defined as present-day York and Adams counties in Pennsylvania and adjacent northern Maryland, were overwhelmingly of those faiths.

The broad appeal of Fraktur is in the colorful designs that make them instantly recognizable as unique folk art. There is no real agreement about the meaning of the traditionally Pennsylvania German motifs. Angels were clearly spiritual beings. The colorful tulips and carnations; parrots, finches, and doves; hearts, and even mermaids, may have symbolic meaning, or they may be purely decorative. The Fraktur artists of the York County area, including the three most prolific: Daniel Peterman, Adam Wuertz and Johannes Bard, used these designs. Others artists/scriveners who did significant work in the area include Arnold Hoevelman, George Peter Deisert, Francis Portzline, the Pseudo-Otto artist and the Hanovertown artist. As more examples come to light, more artists are being identified.

The heyday of Fraktur was from about 1770 to 1870 with both hand-drawn and printed Taufscheine flourishing side-by-side. Most of the text in earlier examples was in German. Later certificates were sometimes printed in English with German infill, or vice- versa. Most early printed forms were horizontal with somewhat heavy woodblock designs. As time went on the orientation was usually changed to vertical.

Printed certificates are valued for their craftsmanship, as well as the family information they contain. Taufscheine are often the only source of data linking generations of a family. They name the child and parents, with the mother’s maiden name and also sponsors, who were often relatives. The township, county and state pinpoint family residence.

Significant York County-area printers of Taufscheine include Salomon Mayer and Daniel May of York and the firms of Lepper & Stettinius and Starck & Lange in Hanover. York County families also used forms printed in Harrisburg, Baltimore, Reading and Allentown. Although produced by the means of woodcuts and metal type instead of being individually created with pen and brush, these printed forms were similar in design to the completely hand-done forms. They utilized the familiar hearts, flowers, birds and angels and were usually hand colored. The same baptismal verses were used, and text followed the same basic form, making it easier for modern-day individuals to read the information.

The certificates flourished into the Civil War era, with mostly printed examples. They were then gradually absorbed into the American “Victorian” culture of the late nineteenth century until they only resembled early Pennsylvania German Taufscheine in that they still recorded the birth and baptism of the child. By then communities became less closed and church centered. The 1834 Public School Law, which virtually forced the Pennsylvania German children to be exposed to other cultures, was a prime element of change, even though acceptance of the law was gradual in York County. Eventually the Pennsylvania Germans wanted to fit into the community as much as anyone else.

Whether hand-done or printed, Taufscheine convey a strong sense of the two most important constants in the lives of the Pennsylvania Germans–faith and family. Baptism signified the forgiveness of sin and the child becoming a member of the church, a child of God. The certificates, with carefully recorded dates and earthly parentage, also show the importance of family life to these people who had left their extended family to cross the sea in search of opportunity.

Today Fraktur is valued both by admirers of folk art and by those exploring their Pennsylvania German heritage. It was the subject of my Master’s thesis, subsequently published as a book, Faith and Family: Pennsylvania German Heritage in York County Area Fraktur, by York County Heritage Trust. I am still continuing my research and have recorded around 2,000 Taufscheine and related family record forms done for York County-area children. I welcome knowing about unrecorded examples and can be contacted through the comment form below. Or I can be reached directly by email at ycpa@msn.com. All information about ownership can be kept confidential.