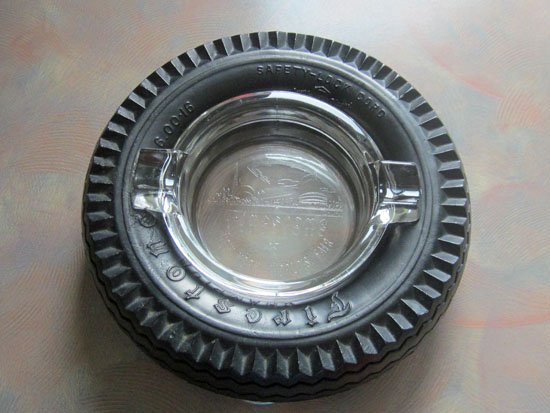 A recent post told of York Safe and Lock Company taking 14 train cars of employees and their families on a special excursion to the 1939 New York World’s Fair.

A couple of local ladies shared their stories of traveling by automobile to that fair when they were children.

Old friend Janet Fauth Becker of Red Lion went with her mother, father, aunt and uncle. The adults and Janet, age seven, drove up for the day. They brought back the ash tray pictured above, complements of the Firestone Tire Company. Janet remembers scary lighting inside a building. That was probably the General Electric pavilion, whose engineers did create indoor lightning.

Gladys Fourhman Wright, originally from the Steltz area of southern York County, was nine years old when she went with to the fair. Her uncle, Harry C. Miller, was originally from York County too, but in the 1930s he was living in Collingswood, New Jersey, where he and his wife, Elizabeth, both taught at the high school. Gladys was visiting them, and they drove into New York in their maroon Ford for the fair. She remembers sitting for a long time in the Holland Tunnel when the car in front of them had a flat tire.

When they got to the fairgrounds at Flushing Meadows, Gladys remembers being told by her proper aunt not to look at the naked statues that were part of the art on display. One of the wonders that impressed Gladys was seeing themselves on that new marvel, television. RCA introduced television to consumers at the New York World’s fair, changing the way we look at the world forever.