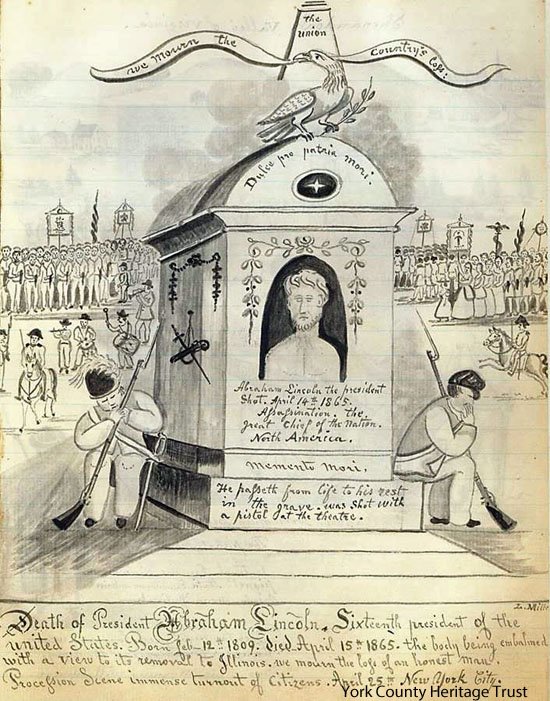 Today is the 150th anniversary of the assassination of President Lincoln. After he died the next morning, plans were put in place for the long journey from Washington to Springfield. The funeral train route traced much of the same path of his inaugural train four years earlier in reverse, giving much of the northern part of the nation a chance to publicly mourn his passing.

The train stopped briefly in York, allowing some prominent local women, accompanied by a free African American to place a wreath in the funeral car. Click here to read more from fellow blogger Jim McClure, quoting Judge Henry Niles, who was six years old in 1865, relating his memory of ladies of York and Aquilla Howard taking a wreath on board the train.

No known depictions are known by York folk artist Lewis Miller of the funeral train passing through York County. The Miller drawing above commemorates the crowds that turned out in New York. It includes a fanciful memorial to Lincoln imagined by Miller. He probably knew of the “immense turnout” from newspaper reports, although, since he visited relatives occasionally in New York, he could possibly have been there.

Miller’s captions on the drawing read:

“The Union
We mourn the country’s loss.
Dulce pro patria mori.
Abraham Lincoln, the president shot April 14th, 1865.
Assassination. The great chief of the nation. North America.
Memento mori.
He passeth from life to his rest in the grave, was shot with a pistol at the theatre.
Death of President Abraham Lincoln. Sixteenth president of the United States. Born Feb. 12th, 1809, died April 15th, 1865, the body being embalmed with a view to its removal to Illinois. We mourn the loss of an honest man.
Procession Scene, immense turnout of citizens. April 25th New York City.”

This map shows the routes of the original inaugural and funeral trains.

A replica of the Lincoln funeral train car has been completed in Illinois, but it doesn’t look like it is coming very far east. There is a York County connection though–the carpet for the new train car was woven by Family Heirloom Weavers in Adamsville.

Click the links below for more York County connections:

Some of my previous posts on the subject.