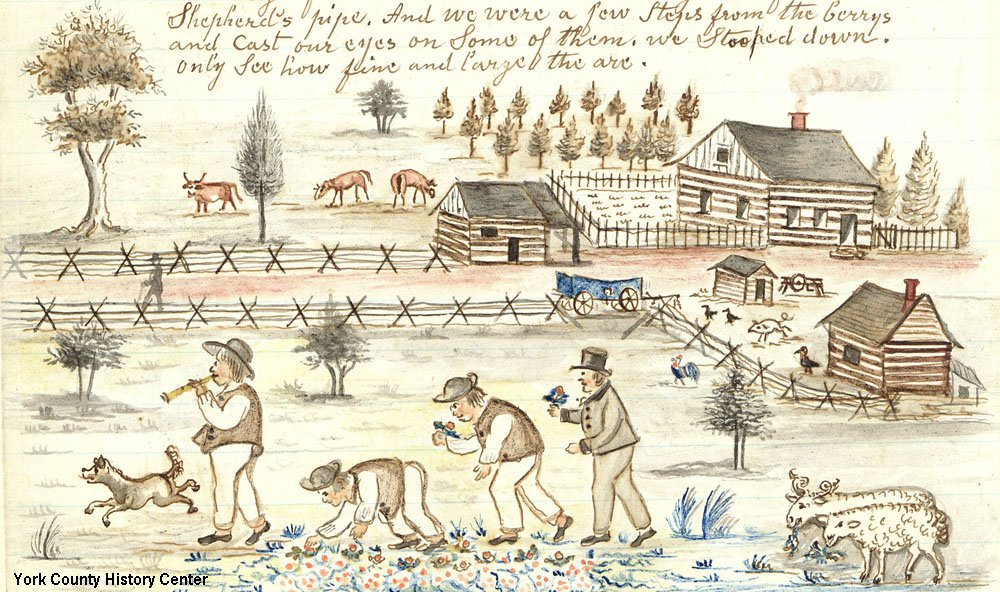 Lewis Miller left such a wealth of information in his drawings, and his accompanying text, about life in the United States, especially York County as it was two hundred years ago.  The more you look at them, the more you see.  While reading his sometimes cryptic descriptions, the proverbial lightbulb often goes on, illuminating further depths in the lives of our forebears.

My recent post took an detailed look at Mrs. Hersh cooking in her tavern kitchen, as recorded by Miller.  The chicken, fish, sausage and baloney are all there, along with the bread going into the bake oven.  You see the pots, pans and even the coffee mill on the mantle.  That is just one of the scenes we will be examining in my new slide show, premiering at the upcoming South Central Pennsylvania/York County History Center genealogy conference on September 22.  Click here for registration information.

Another of the slides will feature teenage Lewis Miller’s visit to the Geiger farm in Windsor Township.  There is so much information in that drawing and description on what life would have been like on a small farm of the time, that I shared it in my recent York Sunday News column. (See below.)

If you are at all interested in York County’s rich history, you are probably familiar with the wonderful drawings of folk artist Lewis Miller (1796-1882). His watercolors of York County have been widely used in books and articles to depict American life in the 19th century. Miller’s drawings are in the collections of leading museums, with the bulk of his illustrations in the York County History Center collections.

I am once again immersed in the drawings, putting together a PowerPoint presentation, The Pennsylvania German World of Lewis Miller, for the upcoming Researching Pennsylvania Germans genealogy conference on September 22. See below for more information.

The drawings give us a clear look into the lives of York County residents 200 years ago, perhaps including your ancestors. The more you look at the drawings, the more you see. You learn about their habits, occupations, food and drink, religion, patriotism, homes and public buildings. Miller introduces you to the visits of famous folk and animals, bringing the outside world to York County. He describes squabbles between spouses, neighbors and rivals.

We learn from Miller’s sometimes lengthy descriptions, as well as his minute pictorial detail. Miller was quite aware that he was leaving a legacy for us, so that we might understand the York he loved so well.

For this column I have chosen one of the many drawings from my slide show, transcribing Miller’s words and pointing out the details in each drawing. I will be sharing more of the stories on my Universal York blog.

“The Geiger Family and Lewis Miller.

I paid a visit to the three brothers, they are bachelors, by the name of Geiger, Conrad, Paul and Peter, they are living in Windsor Township, six and a half miles from town. There they do all the work what belongs to housekeeping, their own cooking and washing, spinning thread and weave on the loom, make clothing to dress. And do their own smith work. And farm a few acres of land in wheat and corn for bread, which is made to support life, and have a fine garden and orchard of all kinds of good fruit trees, and a stand of beehives where bees are kept for the honey, and to make a little money. They make and burn charcoal and sell them in town. They have horses, cows, sheep, hogs, chickens and turkeys. One acre of ground that laid idle for some years, all over spread and full of strawberries. They were ripe when I was at the place in the month of June 1810. We were walking to the strawberry patch, humming over a pretty song then fashionable in the country by the Germans. Conrad was a walking before some little distance amusing himself with a shepherd’s pipe, and we were a few steps from the berries and cast our eyes on some of them. We stooped down only to see how fine and large they are.”

Miller wrote a good bit of information about his visit to the Geiger brothers, but still more can be gleaned from the drawing itself. You can see that the buildings are all of log, including the typical 1½ story house with a central chimney. Many of these survive today, hidden under numerous layers of siding. There is a small barn/cattle shed. This period is a little early for many large barns, and the Geigers would not have needed much storage for their few acres of corn and wheat. We see the fruit orchard behind the house and probably a garden beside it. Besides cattle, the Geigers had the usual chickens, sheep, pigs, as Lewis stated, and a lively-looking dog. He even drew a tiny turkey. A traditionally blue-painted wagon sits behind the stake and rider fence. To the right of the smallest structure you can even see a grindstone, used to sharpen implements. The farm probably straddles a public road, since a passerby can be faintly glimpsed at left center. The Geigers are dressed in everyday clothes, and 14-year-old Lewis is dressed in town garb, as he usually depicted himself. Pennsylvania Germans often delighted in music, as described by Miller and as shown by the Shepherd’s pipe (small flute).

If you are interested in owning published copies of Miller drawings, Lewis Miller’s People (2014) and The Hessians of Lewis Miller (1983) are available from the York County History Center. Miller’s Sketches and Chronicles of York (1966) is out of print, but previously owned copies can usually be found online. Through a recent partnership with Google Cultural Institute, Miller’s drawings in his own copy of Henry L. Fisher’s The Old Market House have been digitally scanned and are viewable on the York County History Center website. I have drawn on both published and unpublished Miller drawings for my new slide presentation.