Lewis Miller celebrates the end of the Civil War 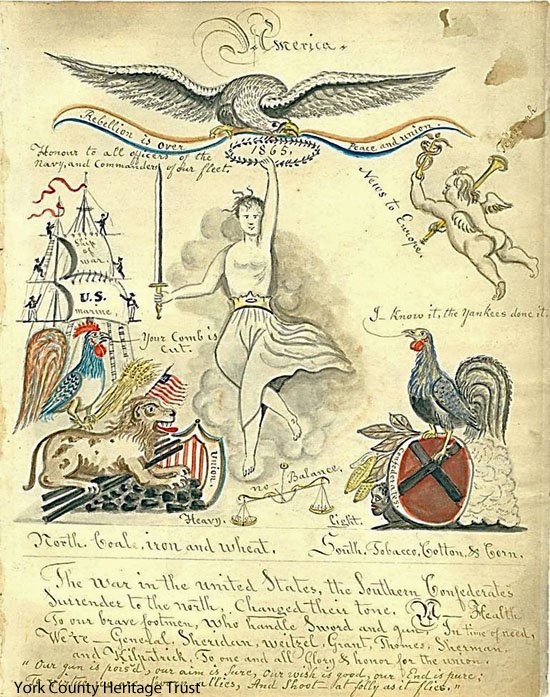 On April 9, 1865 Union General Ulysses S. Grant and Confederate General Robert E. Lee met at Wilmer McLean’s house at Appomattox Court House, Virginia. General Lee surrendered to General Grant. Even though there were some battles and skirmishes later, this date is usually accepted as the end of the Civil War.

As I indicated before, even though York’s folk artist Lewis Miller had numerous relatives in Virginia, his art shows that his heart was with the Union. His watercolor above, rejoicing in the end of the conflict, has a lot of detail and symbolism. The words are transcribed below, from top to bottom, for easier reading, but also look closely at the drawings themselves.

“America
Rebellion is over, peace and union.
1865
Honour to all officers of the Navy, and Commander of our fleet.
Ship of war.
U.S. marine.
News to Europe.”

Union rooster to Confederate rooster]
“Your comb is cut.
I know it, the Yankees done it.”

Miller sums up the war:
“The war in the United States, the Southern Confederates
Surrender to the north, Changed their tone. A Health
To our brave footmen, Who handle Sword and gun, in time of need.
We’ve—General Sheridan, Weitzel, Grant, Thomes, Sherman
and Kilpatrick. To one and all Glory and honor for the union.

‘Our gun is pois’d our aim is Sure, our wish is good, our End is pure;
To virtue we are Sworn allies, And Shoot—at folly as it flies.’”