My recent York Sunday News column was on the leading 20th century poet, Lee Anderson, a resident of southern York County. In addition, I also shared some of Anderson’s poetry  in my last post. Here is a look at how he really supported himself:

Anderson was very candid in that very, very few poets ever earn enough to support themselves with poetry. Anderson and his wife Helen actively farmed their Potosi property and raised animals there for sale. He probably had a stipend to conduct his project of recording living poets reading their own poems, especially after Yale University took over the venture. Lecturing and visiting professorships would have brought in more income.

Along the way, Anderson had learned the craft of printing, so another source of funds was his local business, the Shrewsbury Press. The main output of that press was popular greeting cards, published under the Leander brand name, a contraction of Anderson’s name. I found a box of 24 different cards in Anderson’s files at the York County History Center Library/Archives. They are pictured here. Some of the designs are signed and I recognized some names of local artists.

A somewhat worn birthday card was also in the files, with the Shrewsbury Press imprint. The front and back of that card are also pictured below. The rather sharp message is interesting, and the husband that would receive one of these cards had better take heed. 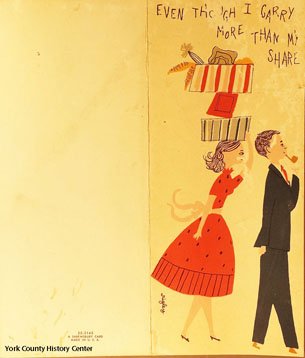 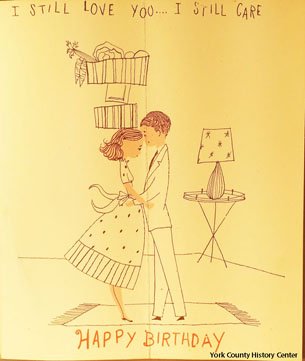