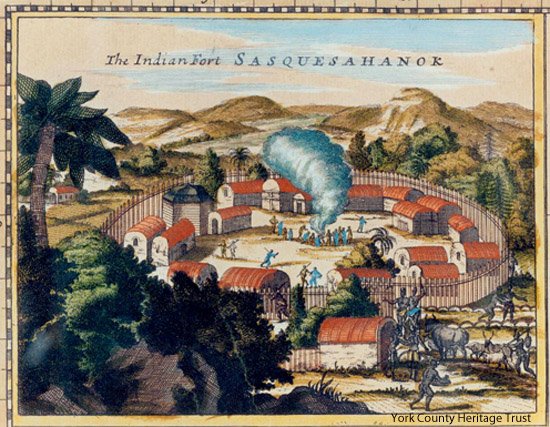 I learned some new things last week at Paul Nevin’s talk at the Zimmerman Center for Heritage, home of the Susquehanna Gateway Heritage Region. His talk focused on the last Susquehannock Indian village, the site of which is now part of the Native Lands York County Park, on top of the hill behind the Zimmerman Center (Dritt Mansion) at Long Level on Route 624. It has been known for many years as the Lower (Byrd) Leibhart site. (The Upper (Oscar) Leibhart site, occupied shortly before the Lower site is a short distance away, and was preserved in 2009.) Click here for my 2009 York Sunday News column exploring both sites.

Nevin displayed artifacts found at the site many years ago. They had been in private hands, but were sold recently at a public sale, and funding is being sought to secure them for permanent display. These included objects such as tools and beads, perhaps made by the Native Americans using clay, stones and shells when they inhabited the village, as well as ceramics and metal items obtained through trade.

We call these natives Susquehannocks since they lived near the Susquehanna River. Susquehanna is an Algonquian name, meaning Muddy River. These people, however, were not Algonquians, so we don’t know what they called themselves. We also wonder at Captain John Smith’s description of these people as giants. They seem to have been taller than the Europeans, with some standing perhaps around six feet or a little more–tall enough to impress Smith and his companions.

The Monocacy path, one of the main Native American routes through our area, would have run very near the site, running through East Prospect, through York and then Hanover (none of which existed at the time). It was later incorporated in roads somewhat following state routes 124 to 462 and then down 116. This route was followed the next couple of hundred years as European settlers spread out to populate the United States.

Nevin even had an explanation of something I have been wondering about for years: Why does the illustration above, which supposedly shows the Upper Leibhart site (even though it was done in 1720, about 45 years after they moved from there) show a palm tree? I’ll post more about that later.