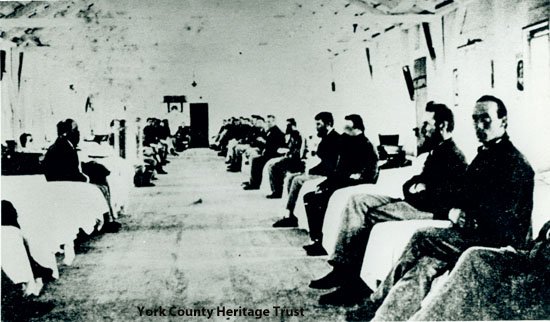 The Chief Surgeon, Dr. Henry Palmer, and his staff seemed to follow the most modern practices of treatment of the day. Cleanliness, exercise and other activities were stressed. When the main buildings were converted from army barracks windows and ventilators were installed and the hospital was whitewashed inside and out. Fat round stoves at each end of each building provided heat. The story goes that when local businessman Samuel Small was asked for a couple of rocking chairs for the soldiers’ comfort, he sent a wagon full. A chapel was built and the patients had access to a library.

The men ate in three shifts, 800 at a time. A train-like system got the food in front of them quickly. Menus included mutton pot pie on Monday and Thursday, Pork and beans on Tuesday, Fresh vegetable soup on Wednesday, Boiled cabbage and potatoes on Friday, Irish stew on Saturday and Roast beef and mashed potatoes on Sunday.

There was much support from the local community. York women formed “The Soldiers’ Aid Society,” preparing bandages, baking bread and helping care for the sick and wounded.

For more information follow this link to a previous post that includes my York Sunday News column on the Penn Common Civil War hospital.

This link details some of the activities, including building the chapel.