June 1863 news from the York Gazette 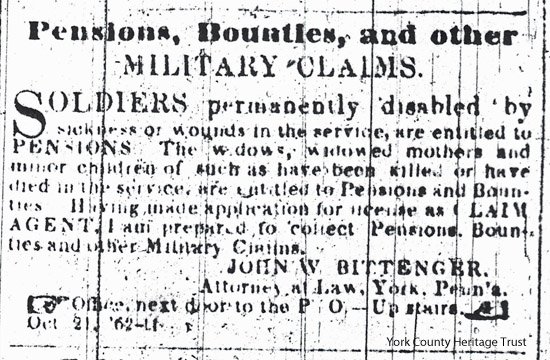 War news was summarized as usual in the June 9, 1863 weekly issue of the York Gazette. Reports came in from Vicksburg; Franklin, Tenn. and the lower Mississippi. Little did they know that in less than three weeks war news would be coming from York and Adams Counties.

The paper also carried two short articles related to the financial health, present and future, of the soldiers:

The Payment of the Troops.–The Secretary of the Treasury on Tuesday signed the last warrant for the payment of the troops up to May 1. The whole amount disbursed for this purpose, all of which was paid out within the last ten days or a fortnight, has been between $37,000,000 and $38,000,000.

The figures are hard to read; they could be $87,000,000 and $88,000,000. From what I’ve read the soldiers were supposed to be paid at least every two months, but sometimes it went longer, so I don’t know how many months this distribution covered. Click this link for more on Civil War military pay.

Important to Discharged Soldiers–We are informed that such discharged soldiers as intend to apply for a pension, should do so within a year from the date of their discharge, or they will lose a whole year’s pension. All applications made after the expiration of a year will only secure the pension from the date of said application, but if made within the year, their pension will commence with their discharge.

By this time, two years into the war, there were plenty of attorneys eager to help the veterans receive the pensions due. On the fourth, and last, page of the paper, we find this ad:

Getting a pension wasn’t easy, as this typical affidavit shows.

There was also a Pennsylvania state Civil War proposed.