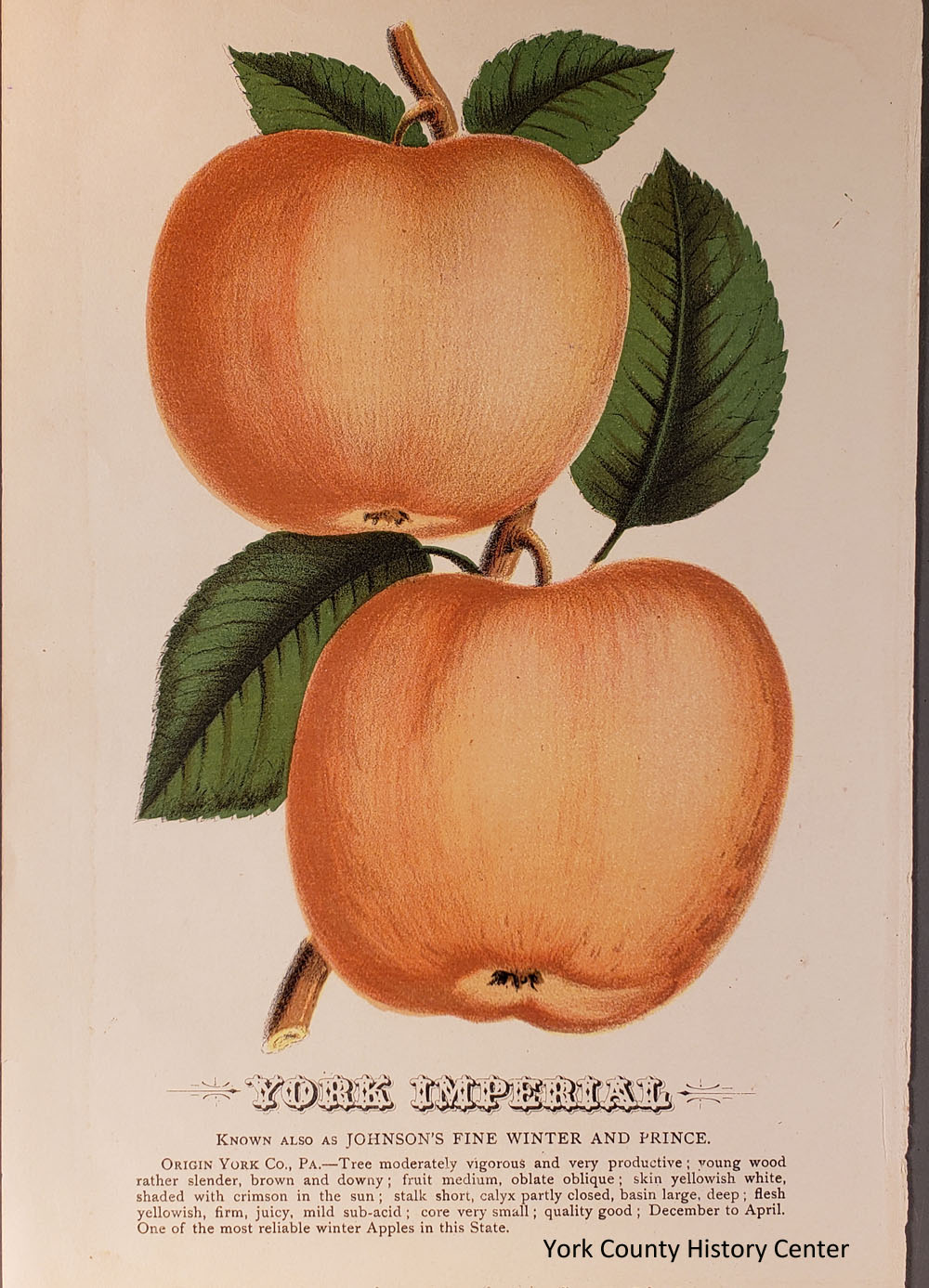 The York Imperial apple won’t win any beauty contests. I have several in my fruit bowl right now and they all look different. They come in various shadings of red and green with brown freckles. Shape isn’t uniform either–one is round, one is lopsided and one is…well, a kind of lopsided oval that’s higher on one side than the other.
Beauty isn’t what has kept Jonathan Jessop’s York Imperial apples popular for over 150 years. It’s their firmness and long keeping qualities that made them a favorite for storage and still keeps them in the high esteem of fruit processors.
See below for my recent York Sunday News column on clockmaker, engineer and fruit farmer Jonathan Jessop and his apple.

You may have heard that the York Imperial Apple was developed by a Quaker named Jonathan Jessop on his York Township farm, part of which is now the site of Apple Hill medical center. You may have even noticed the bronze plaque on the lower level of the medical center. The plaque reads:
THE YORK IMPERIAL APPLE
Was First Propagated About 1820
In This Field By
JONATHAN JESSOP
It Is the Most Widely Known Variety
of Pennsylvania Origin and Has
Contributed Largely to the
Horticultural Prosperity of the State
A Tribute by
The State Horticultural Association of Pennsylvania
1920
If this York County born and bred apple is so special, do you recall ever eating one? Maybe not– I’ve never seen them in supermarket produce departments and rarely on market stands. Most of us, however, enjoy York Imperial apples quite regularly. According to the Knouse Foods®, makers of Lucky Leaf and Musselman’s brands, York Imperial is still highly valued for processing into applesauce and other apple products.
Jonathan Jessop was born in 1771 in Guilford Co., NC to Thomas Jessop and Ann Matthews Floyd Jessop. Ann, who had York County ties, had been made a minister in the New Garden Friends Meeting a few months before she married twice-widowed Thomas in early 1766.
Thomas Jessop died, and in 1784 Ann brought her three young children to York. Jonathan, age 13, was apprenticed to Elisha Kirk, clockmaker, said to be a cousin of Ann. In October 1791, Jonathan Jessop advertised that he was carrying on “business at that former stand of Elisha Kirk, deceased, where he makes all kinds of Clocks, and will constantly be supplied with an assortment of new Watches, of the first quality….”
Jonathan married Susanna Updegraff in 1794, and they bought their home in 1798. (It was at 274-276 W. Market St, a parking lot since 1965.) Jessop was multitalented. He carried on the clock and watch making business all his life, at one point taking on young Phineas Davis as an apprentice. He was also a noted engineer, working on the Codorus Navigation as well as roads and railroads. Jessup, MD gets it name from the railroad cut engineered by Jonathan Jessop.
With her children settled in York, Ann Jessop went to the British Isles in 1790 to preach for about two years. While there she reportedly visited step-daughter Sarah in Scotland. The Jessop home was in the midst of the Battle of Guilford Courthouse in 1781, and Sarah fell in love with a wounded member of the Scots Guard. Ten-year-old Jonathan drew a detailed map of the houses and troop placements at the time of the battle. The drawing was still in the possession of a descendant some years ago.
Ann is said to have brought plant samples back from Britain, including scions (twigs for grafts) of apple trees. She took some to North Carolina, where she had a member of her extended family propagate them.
Apple culture was extremely important in the nineteenth century in this area. They grew well here and they were an important food source. They could be cooked, baked, and dried. They could be made into cider and into vinegar, important in preserving other foods.
An apple that could be kept in its raw state, whether for eating or for later processing, was something to strive for. That’s where Jonathan Jessop’s York Imperial shines.
Jessop wasn’t just a fine clockmaker, engineer, and entrepreneur. (He was in the cotton business, probably because of ties with relatives in his native state.) Besides his home in town, Jessop had the farm at the present site of Apple Hill, where he shared his mother’s interest in growing apples.
There are several versions of who discovered, around 1820, some apples that were still fresh when they were found under leaves in the spring. Some credit John Kline of Hellam and some say is was William Johnson, nearer to York. Johnson and Jessop may have both grafted similar twigs on root stock, but Jessop get the credit for continued development of the apple. The resulting fruits were called “Johnson’s Fine Winter” or “Jonathan’s Fine Winter” until the 1850s when an apple expert named it the York Imperial for its imperial keeping qualities and its birthplace in York County. Scientific publications credit that long keeping trait to the density or lack of air in the apple. I was just told that the commercially dried apple slices you buy are often York Imperials because of that same characteristic.
The York Township farm, known as Springwood, was later owned by Jonathan’s son Edward, who raised his large family there with his wife, while commuting each week to Baltimore to run his hardware business. Edward’s daughter Elizabeth became the wife of farm machinery manufacturer A. B. Farquhar. The farm was later sold to John C. Schmidt, who was instrumental in having the monument to the York Imperial Apple erected in 1920.