My previous post on John Fisher focused on his clocks. Fisher was also quite an artist. As well as pictures, he painted his wood carvings and also flags and trade signs to order. York folk artist Lewis Miller recorded what happened when Fisher’s dog got a look at the sign Fisher was painting for the Black Bear tavern.

“Old John Fisher painting a bear on a sine, up in the garret, and he had a dog by name of Wasser, and when Fisher was called to dinner the dog went up stairs to the sine, and when he saw the Bear, he made at him and spoilt the paint all over and catch eagerly squeeze it, and son Charles run up and saw the dog spoil the painting, run down to his father and told what the dog was doing. Fisher run up and saw it saying “his Wasser, nature—nature, his—his.” The old man was pleased at it, delightful for so doing.

The sine was for Henry Shaffer. Tavern—Innkeeper of the Black Bear in East Market Street, 1796. I saw the sine after hanging at the house [tavern] in my time. Lewis Miller.”

Miller is illustrating a story that happened in 1796, the year Miller was born, but it was probably repeated often around town. His likeness of Fisher is probably pretty accurate. Fisher died in 1808 when Miller was 12 and Miller’s depictions of people and scenes that he could only have known as a child seem to match up pretty well with portraits and other evidence. He is also attesting that he saw the sign later hanging at the tavern.

I suppose that Fisher had to repaint the sign, but, according to Miller’s description, Fisher was pleased that the bear was so realistic that the dog followed his natural instinct to attack.

The illustration and caption above was done in Miller’s own copy of Henry Lee Fisher’s ‘S Alt Marik-Haus Mittes in D’r Schtadt, an Die Alte Zeite. The book was published in the late 1870s, so Miller would have been over 80 when he did the drawing.

Miller also did a smaller drawing of the same subject in the margin on one of his Chronicles of York pages. See below: 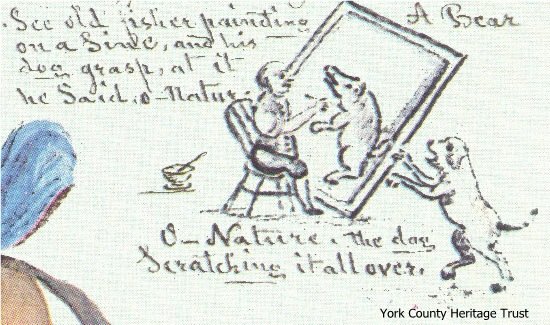 “See old Fisher painting a Bear on a sine, and his dog grasp at it. He said ‘O Nature ONature. The dog scratching it all over.’