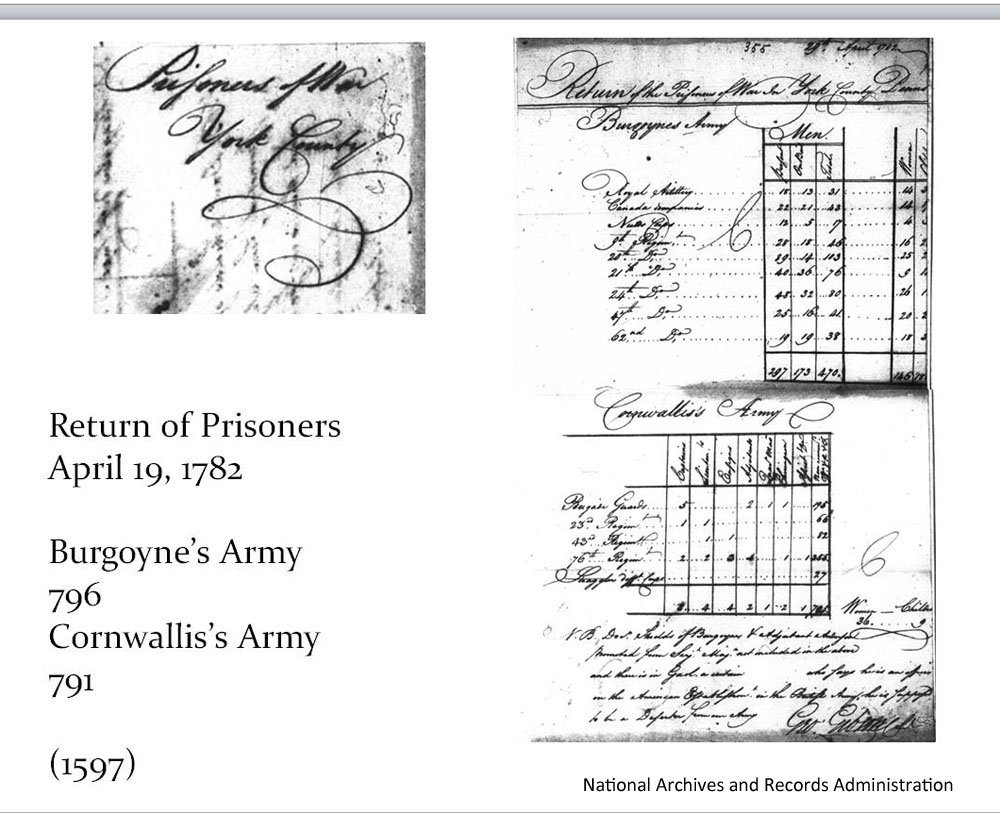 How Many Revolutionary War Prisoners Were at York’s Camp Security?

I gave a brief overview in my recent York Sunday News column of Camp Security, the 1781-1783 Revolutionary War prisoner of war camp just east of York. The whole column is at the end of this post.
Camp Security is the last remaining prisoner of war camp in the United States that has not been swallowed up by development. The site is considered to be at the highest priority risk by the National Trust of Historic Preservation and the National Park Service. Only a few of the approximately 40 acres of the camp have been subject to full archaeological exploration.
Estimates of the number of British Prisoners interned at Camp Security vary. Records are rather sketchy in comparison with statistics we keep today, and the existing records can be interpreted differently. Some sources say many died or deserted before and after they arrived in York. Other sources say deaths and desertions have been exaggerated. As more catalogs of document collections and documents themselves become accessible online, more statistics may surface.

I think that as many as 1,500 prisoners may have arrived when the camp was opened in the summer of 1781. These were the British soldiers surrendered by Burgoyne at Saratoga in 1777. I also believe that the British that arrived at Camp Security in early 1782, having surrendered with Cornwallis at Yorktown, Virginia, could have numbered up to another 1,500.
A friend who has been researching Camp Security for years recently reminded me of George Gibson’s Return of Prisoners dated April 19, 1782. If I am reading it correctly, it lists, under “Burgoyne,” a total of 796 men, women, and children. (Officers could have families with them.) It also lists, under “Cornwallis,” 903 officers and soldiers. That total is 1,699. Some sources, however, indicate that these totals do not include those that were paroled out to work for local farmers and craftsmen. We do not have the figures on that either, but it was substantial enough for the Pennsylvania General Assembly to pass an act requiring those prisoners to be registered. The order read:
“Public notice is hereby given that in Pursuance of a late Act of the General Assembly of the Commonwealth of Pennsylvania, All and any Person or Persons having Prisoners of War employed by them or residing with them for the Purposes of Labour & otherwise, by any Order of the War office, or of such Officer as may be authorized by the Said Office for that Purpose, Such Persons so having or receiving Such Prisoners of War, Are Required to enter the Names of such Prisoners with the next Justice of the Peace within One Week of bringing them to their Places of respective Residence.
The Inhabitants of York Town and its Vicinity are directed to make their Entries with Col. William Scott, Esquire.”
As time goes on and more sources become available, we hope to have a better picture of this significant chapter in our history. Let’s hope that the site will be preserved for future generations.
The York Sunday News article follows:

Why We Shouldn’t Forget Camp Security

The Pennsylvania State Historical Marker is missing from its location on Route 462 near Locust Grove Road. Friends of Camp Security is working to replace it. In helping revise the text for them, I am reviewing extensive research done on Camp Security and realize once again what an important site it is.
Camp Security is exceptionally significant in both national and local history. It is the only existing undeveloped Revolutionary War prisoner of war camp. It has been threatened with development several times, and we are in an uneasy lull at present. In 2005 the National Trust for Historic Preservation named Camp Security one of the 11 most endangered sites in the country. Just last month the National Park Service released its monumental Report to Congress, listing Camp Security at the highest priority for preservation. You can read it at www.nps.gov/history/hps/abpp/Rev1812Study.htm
Camp Security came about because of the terms of British General Burgoyne’s surrender to American General Gates at Saratoga, New York in October 1777. (Continental Congress was meeting here in York at the time because the British were occupying our former capital, Philadelphia.)
The war hadn’t been going well, so Congress was elated to hear of the surrender of Burgoyne’s army, but less happy with the Saratoga Convention (agreement) to which Gates had consented. It allowed the British and Hessian (German mercenary) enemy troops to return to Europe by promising that they would not again take up arms against the colonies.
The Congressmen feared that Burgoyne’s soldiers would rejoin the British army or return home and free up replacement troops to come to America, so Congress stalled their return. The prisoners were held in New England for about a year, until late 1778, when the 4,500 prisoners were marched from New England through Lancaster and York to camp at Charlottesville, Virginia. American guards supposedly were happy to have prisoners desert along the way. Many slipped away as they passed through our area, especially Hessians, whose service had been sold by their rulers to the British king. Quite a few York County families can trace their roots to these Hessians.
The war moved to Virginia in the fall of 1780. Congress, back in Philadelphia, became uneasy lest the British liberate the prisoners. They were moved north, staying briefly in Winchester, Virginia and Frederick, Maryland before going into temporary quarters at Lancaster. Pennsylvania objected, to no avail, to the prisoners staying permanently in the state. The Board of War ordered the Hessian prisoners near Reading and the British near York.
Col. James Wood, was in charge of the British prisoners, assisted by York County Militia commander Lt. William Scott. Wood reported to Pennsylvania President Joseph Reed in early August 1781: “I have fixed British troops on good ground…between York & Susquehanna, so as to be very convenient to throw them across the river in any emergency.” One emergency would be a British attack from the south.
David Brubaker of Lancaster County owned the 280 acres chosen, partially farmed and partially wooded, in then Hellam (now Springettsbury) Township. Johannes Schultz was an earlier inhabitant of the property. Most of Brubaker’s land today covers the area popularly known as the Wiest farm and the Rowe farm.
Lt. Scott provided York County Militia to serve as guards at Camp Security. A good many York County natives have ancestors that guarded the prisoners.
There could have been at least 1,500 prisoners initially sent to Camp Security. In early 1782 they were joined by up to 1,500 more British troops surrendered with Cornwallis at Yorktown, Virginia. Both groups of prisoners lived at Camp Security until after the war ended in 1783.
The prisoners lived in huts and barracks. Some were inside the secure stockade, but officers and their families lived in huts outside those walls. The Saratoga Convention prisoners reportedly made lace and metal items that they were allowed to sell in the area. Some prisoners were paroled out to work within ten miles of camp.
The general site of Camp Security has never been lost. There are many contemporary accounts and descriptions, as well as tales passed down in local families. In the early 1970s several organizations, including the Historical Society of York County, Lower Susquehanna Archaeology Society, and the Pennsylvania Historical and Museum Commission concentrated on pinpointing the site.
In 1979 Historic York, Inc., in conjunction with PHMC, did a limited dig covering about 16.5 acres, with only a fraction of that fully excavated. Springettsbury Township produced a separate report based on the dig findings. Enough artifacts–period buttons and coins, over 600 straight pins (used in lacemaking), and nearly 2,000 shards of pottery and dishes were found. Seventeen dish-shaped pits were uncovered, meeting the description of the fire pits in the middle of the huts.
Based on contemporary accounts, Camp Security covered up to 40 acres of David Brubaker’s property. The stockade area and the cemetery have yet to be located. Preservationists and historians agree that further archaeology is needed to identify all of Camp Security before it meets the fate of the Reading camp, developed in 2002.