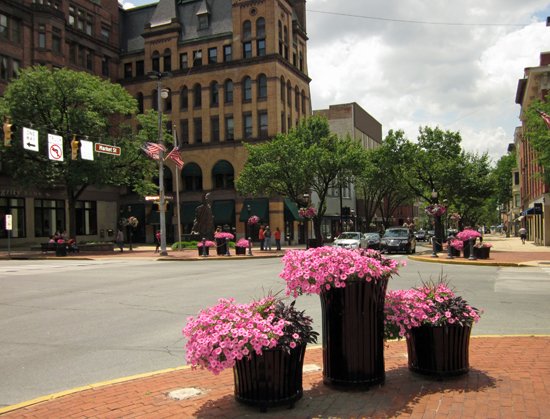 It would like to commend the York County Community Foundation for organizing a recent public meeting to gather input on renovations to York’s Continental Square. I’m sorry I wasn’t able to attend. Click here for the York Daily Record’s report on the meeting.

Personally I thought the square looked pretty darn good (see photo above) when I took photos of the five Pennsylvania Historical and Museum Commission historical markers in the square, but I’m sure there is always room for improvement.

Each blue and gold marker commemorates an important event in our history that occurred there. I hope there is no substance to thoughts of removing any of these markers. In a few words each provides residents and visitors alike with a glimpse into our shared heritage. Historical markers are some of the first things that I stop and read wherever I am in Pennsylvania. There is no reason they couldn’t be moved to another spot in the square if any are in the way of new features, but, please–let’s not talk of removing them.

Another thing to remember is that this isn’t just about us (York County). The markers, all 2,000+ of them are part of a statewide program, one of the most successful historical marker programs in the nation. PHMC has published guidebooks on the markers, each marker’s location and text is easily found on the PHMC Historical Marker Program website, and many are included on the explorepahistory.com website, with a much longer back story of the event.

This is the first of a series of posts on each of the markers in York’s Continental Square/Center Square. In interest of full disclosure, I wrote and facilitated the dedication of the Articles of Confederation marker. It was dedicated in December 2001 to commemorate the 225th anniversary of Continental Congress adopting the Articles of Confederation in the Colonial Courthouse that stood in the square. The maker sponsors were the York Rotary Club and York County Heritage Trust. (I believe I would still feel the same about the importance of keeping the markers in the square even if I had not had a hand in that particular marker.)

See below for a photo and information on the marker commemorating the Provincial Courthouse (which we now usually refer to as the Colonial Courthouse): 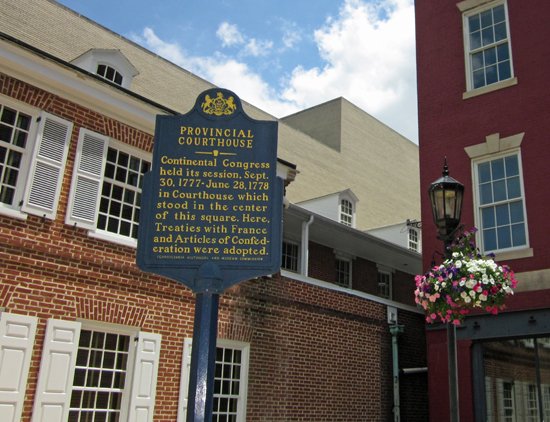 Provincial Courthouse
Continental Congress held its session, Sept. 30, 1777-June 28, 1778 in Courthouse which stood in the center of this square. Here, Treaties with France and Articles of Confederation were adopted.

The marker stands in the southeast quadrant of the square. It was dedicated by the Pennsylvania Historical and Museum Commission December 15, 1949.

Click here for explorepahistory.com and more on the courthouse and what happened there.