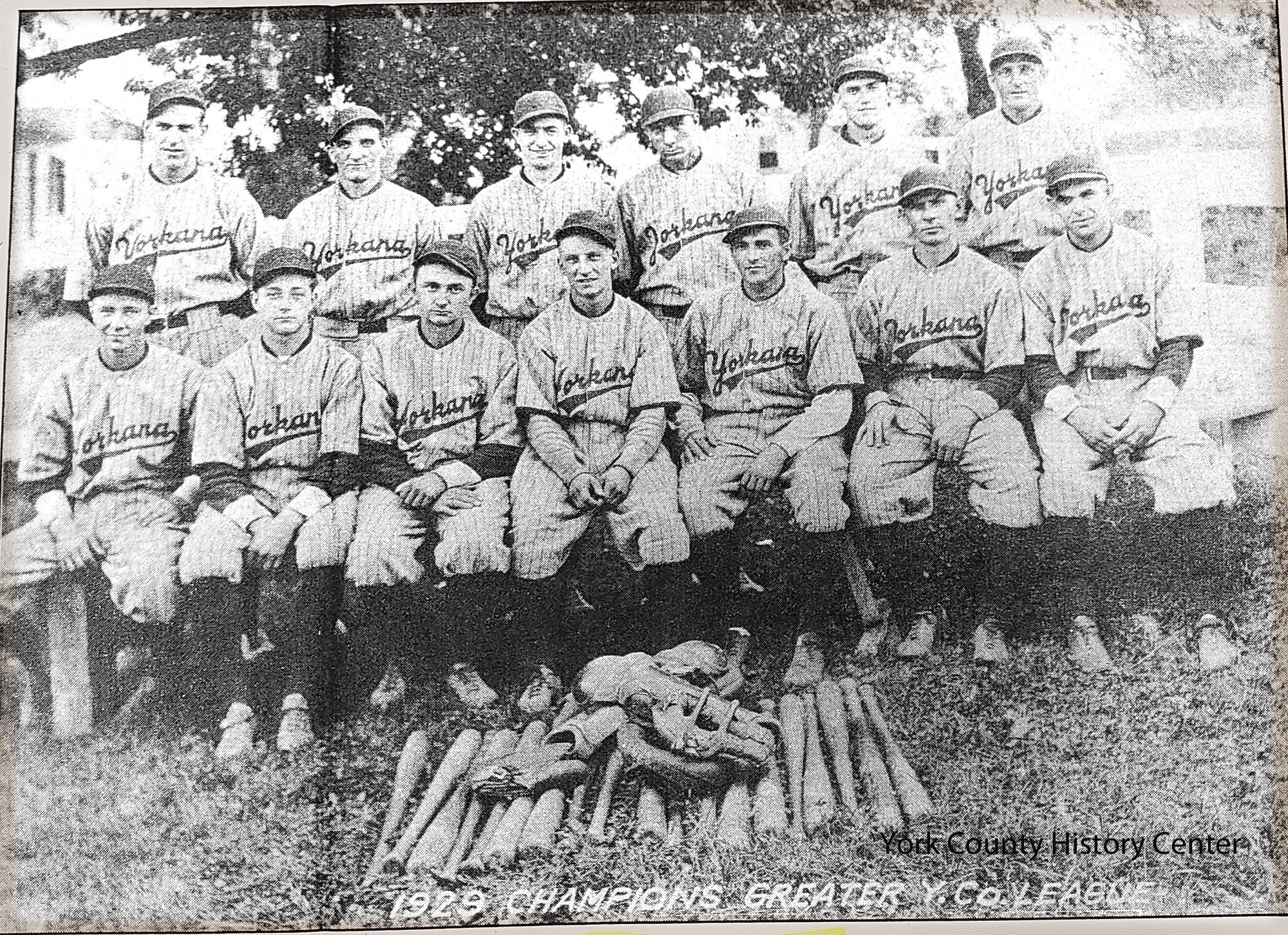 My last month’s York Sunday News column condensed some of the eight-part Gazette and Daily series that ran in the spring of 1940 on the thriving amateur baseball leagues of York County.  Besides an introductory article on the clubs that had come and gone before then, the first four columns told of the origins of the Central, Western and Twlight leagues.

This month’s column looks at the Eastern, Greater and York-Adams leagues, as well as a wrap up pointing out the opportunities these leagues had provided for young players over the years.  The writer also mentions several York countians who had started out in the local leagues and ended in the majors.

The York County History Center files have much more information on baseball in York County, so I am not done writing about the subject.  My latest column is below:

My previous column drew on the first four of eight late spring 1940 Gazette and Daily columns, “Tracing the History of York County’s Baseball Leagues.”  They covered the Central, Western and Twlight Leagues.  This column condenses the other four articles.

The Eastern League, like the Western League, was founded in 1933 with the idea of being a training ground for young players.  Representatives from six teams: Bittersville, Spry, Winterstown, West York, Yoe and Highland A.C. formed the league in April 1933, but Jacobus replaced Winterstown before the season began May 13.  The first game ended with Bittersville forfeiting to Jacobus following a dispute.  The next six years saw teams from Imperial Heights, Spring Grove, Cape Horn, Windsor, Winterstown, Violet Hill, Pleasureville, Freysville, Hallam, Conrads, New Holland, Windsor Park, Yorkana, Wrightsville, Mt. Wolf and Highmount.  All told, a total of 23 different teams participated in various configurations in the Eastern League’s first seven seasons.  The writer calls the 1938 Eastern League championship “one of the most interesting baseball games in the history of York County.”  Highmount triumphed over Wrightsville 3-2 in the 22nd inning.

The Greater League is next to be surveyed.  Greater League President, the Reverend Dochram H. Harris told the Gazette writer “There will be no rowdyism or umpire baiting in the Greater League during 1940. Our players must learn to obey and respect the rules and those men whose job it is to interpret them.”  The league was reminding players that umpires were in charge of games, responsible only to the league president.  All players were asked “to study the official rules in order to arrive at a more perfect understanding between players and umpires.”  That makes you wonder what had been going on during previous seasons. (Harris, known as Joe Harris when he pitched for the Boston Red Sox in the early 1900s, was also a York County probation officer at the time.  He might not have had time to reform the Greater League, as he resigned as league president in mid-June, 1940, about six weeks after talking to the reporter.)

Six teams from the county, Shiloh, Jacobus and Seven Valleys, and Albemarle, St. Mary’s and Iroquois from the city formed the Greater League in 1926, playing the first game on May 1st.  Albemarle and Shiloh tied for the season with Albemarle winning the championship at Eagle Park in 10 innings.  That game was marred when Red Able of Shiloh was hit on head with a ball, suffering a concussion.  Clair Myers came in to run for Able.   Trying to score, Myers collided with Albemarle catcher Clair Strayer, breaking Strayer’s leg.  The Greater League was reorganized in 1930. Long Level, Yorkana, Freysville, Violet Hill, Jacobus, Red Lion, Hallam, Dover, Windsor Park, Spring Grove, Shrewsbury, York Haven, West York, Wrightsville,  Strinestown, Jefferson, Red Lion, Winterstown, North York, Victory, Newberrytown, Thomasville, Dover, York New Salem, Lincolnway and Mt. Wolf all participated in the Greater League for a season or more by 1940.

Finally, the York-Adams League is explored.  The earliest still active in 1940, the league dates back to an organizational meeting on the spring of 1916.  Red Lion, Dallastown, Windsor, Spring Grove, Glen Rock and North York were the charter members of the York County Baseball League.  A silver loving cup and a pennant were awarded to Red Lion, with a 15-5 record, upon the season’s September 2 conclusion. Mt. Wolf and the York Moose Club were added to start off the 1917 season with eight teams, but the league disbanded in August, as young men “had more important business to dispense with” (going off to fight in World War I).  The York County League reorganized in time to start the 1922 season with Red Lion, Windsor, Wrightsville, Delta, New Holland, Felton, Mt. Wolf and Read’s Machinery.  The York County League continued 11 years with 21 different teams.

In 1934 the York County League combined with the Adams County League as the York-Adams County League.   Teams were from New Freedom, Hanover and Spring Grove (York) and Littlestown, New Oxford and McSherrystown (Adams).  The writer says that, in 1934, “Nick Altrock, famed baseball entertainer, performed at the final game in Hanover.”  (Altrock was a former major league pitcher whose career ended early with an injury.  He then became one of several baseball comedians, performing at many games over the years, including at the World Series.)

Over time, Shrewsbury, West York, Albemarle, Abbottstown/Penn, Girard and York New Salem were replacements in the York-Adams League.  With the winds of war blowing again, the columnist expresses his hope that the league won’t have to disband again because of “Europe’s troubled waters.”

In the eighth column the writer expresses his conclusion that the local leagues brought America’s pastime to thousands of fans who otherwise were without baseball of any kind.  He points out that a large number of young players would otherwise never have had a chance to play the game.  York County had already contributed many Major League players up until 1940, including Ken Raffensberger, Cliff Heathcote, “Hinkey” Haines and Norm Plitt.  These players and many to follow started their careers in the amateur leagues in their native York County.

A note on the Susquehanna League, not included in the 1940 Gazette and Daily articles above.  I knew from clippings and entries in my dad’s diaries that he had played for Lucky in the Susquehanna League in the 1930s.  In fact, a diary entry from April 5, 1932 states that he was at a meeting at Lucky to organize a baseball league.  He saved a 1932 Susquehanna League schedule, clipped out of the newspaper.  The eight teams then were Conrads, Windsor, Brogueville, East Prospect, Wrightsville, Freysville and Mt. Pisgah.  The schedule allows for an occasional Saturday double header, playing the same teams twice on the same day.  On Memorial Day, July 4th and Labor Day each team played two games, but with different opponents at different fields, one game in the morning and one in the afternoon.  The league thrived for some years, but was not active by 1940, when the newspaper series was written.  (In 1950, however, the Susquehanna League reformed, as a successor to the Western League.  It carried on for some time.)

There is much more to York County baseball history, from youth teams up through Minor League teams.  This review of amateur leagues in the first half of the 20th century at least gives us a small taste of the widespread interest throughout the county.

I was glad to hear from several of you after my first column on local baseball appeared last month.  If you have anything you would like to share you can email me at ycpa89@msn.com.