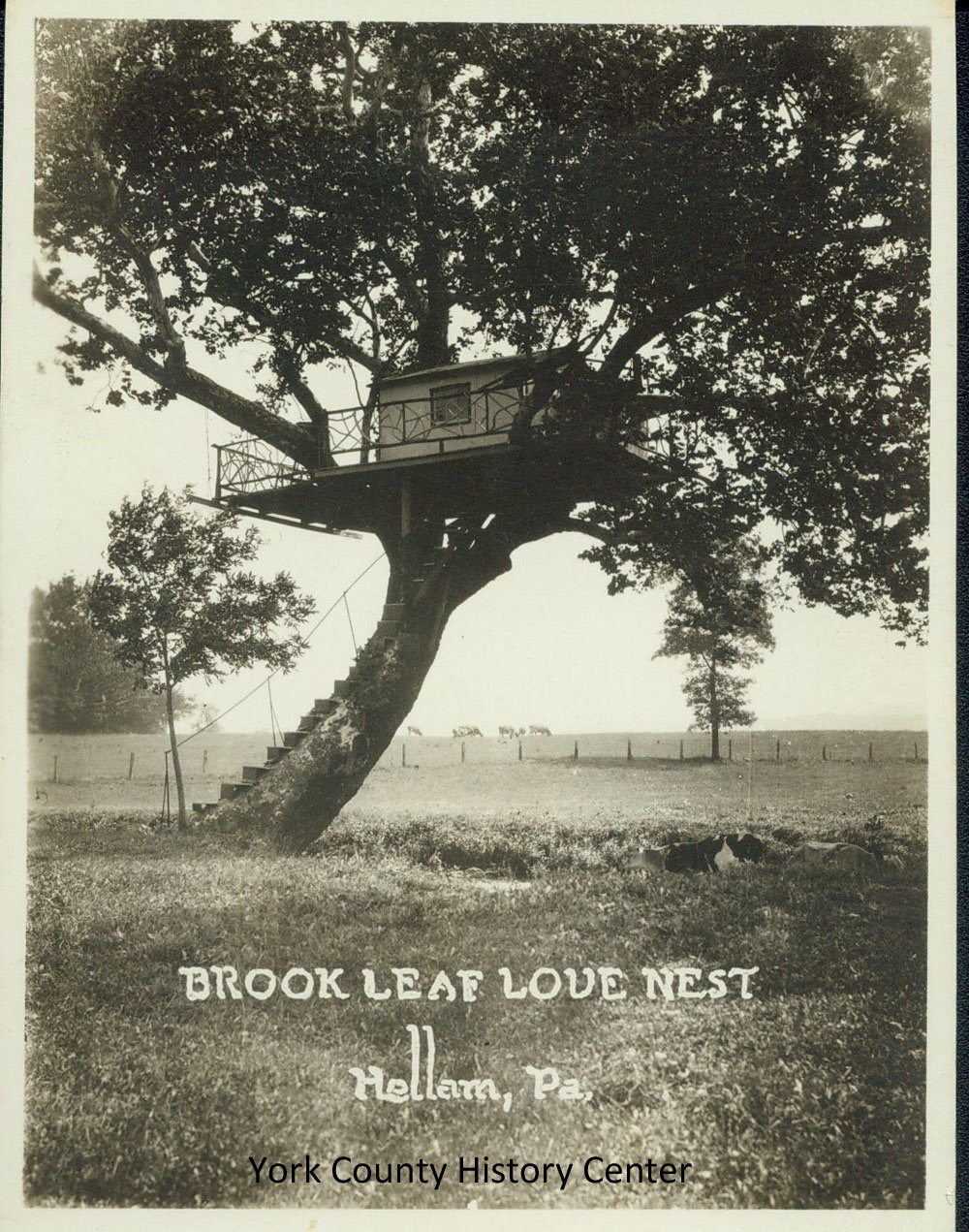 A couple of weeks ago I received an email from a childhood friend who has lived in California for many years. She found a photo postcard that had belonged to her York County grandmother and wondered if I knew anything about the Brook Leaf Love Nest. I remembered that my family had one of those postcards too and that the photograph of the house in the tree had fascinated me as a child.

The York County History Center Library/Archives has a file on Brook Leaf with clippings and one of the photos, and a friend supplied me with another lengthy newspaper article. Luckily, several reporters had interviewed Howard Emig, one of the builders, while he was still with us. (Another example of why we need to record history while those who lived it are still around.)
There was plenty of material for an article for my monthly Sunday News column. (See below for the full column.) I have since talked to other friends who also interviewed Mr. Emig and to a neighbor who grew up in the Hellam area. My neighbor tells me that the Emigs had their own dairy and he has some “Brook Leaf Farm, Emig Bros., Hellam, PA” milk bottles.
My neighbor also told me that, the last he knew, part of the tree trunk with one step still stood. It is on private property, well posted with no trespassing signs, so I would advise against checking it out. I’m hoping that it may be visible in the distance from a public area when the leaves are off the trees. I’ll do another post if it is.

Some of you may remember Brook Leaf Love Nest, a tree house overhanging Kreutz Creek in Hellam Township. Even if you don’t remember the small cottage itself, you have probably seen one of the thousands of photo postcards the owners sold.
Prowell’s 1907 History of York County describes Albert G. Emig’s beautiful Brookleaf Farm, purchased by the Emig family in 1835. Howard Emig, son of Alfred, was 95 in 1990 when he talked to Judy Gelnett of the Community Courier. He said that he and several other “boys” built the tree house in a buttonwood (sycamore) tree overhanging Kreutz Creek in 1921, partially of pine cigar crates that his cousin supplied.
In 1976 Emig was extensively interviewed by Mike Snyder for a feature story in the York Sunday News. He told Snyder that he, his brother Morgan Emig, cousin John Sultzbaugh, and several friends were lazing around on a hot summer day when they realized cool breezes were rustling the trees. They were struck with the idea of taking advantage of the cooling air by building a tree house. The young men scouted out a big tree with a gently sloping trunk on the creek bank in their meadow. Emig said they built the platform with planks his father had purchased for his barn.
Emig and his friends put together the tree house, which he described as about 12 feet by 15 feet, complete with door and windows. The building didn’t cover the whole platform, thereby creating a lofty deck. According to a November, 1921 newspaper clipping, the tree house, perched 25 feet about the creek, took three months to build. The young men installed a coal stove from Sears, making the retreat usable for more of the year, and they wired in electricity. Water was carried from the nearby farmhouse.
The story goes that an out-of-town relative of “locals” heard about it and wondered if he and his bride could stop by and rent the tree house on their honeymoon. Before long, other young couples thought it was a fantastic idea and also asked to honeymoon there. Another clipping in the York County Heritage Trust files is datelined “Hallam, Aug. 19 [1927].” The headline reads: “York Newlyweds Occupy Love Nest: Mr. and Mrs. M. L. Myers Spending Honeymoon at Cottage near Hellam Built in Tree Top.” It says that Mervin LeRoy Myers and Edith Henrietta Albaugh were said to be the first York couple to spend their honeymoon at Brook Leaf Love Nest. When they arrived at the completely furnished “love nest,” the owners (the Emig brothers) “…presented the newlyweds with a large wedding cake decorated with white and cream color roses and a miniature bride and bridegroom.”
Newlyweds weren’t the only ones that came to see the house in the tree. Emig said that 50 cars would sometimes line up in their lane on a Sunday to get a peek. Visitors wanted souvenirs, so the Emigs had 100 photo postcards printed to sell. Sightseers and guests snapped them up so quickly that they were soon ordering them by the thousand. The postcards being sent across the country created more interest–magazines and newspapers picked up the story of romance in the treetop. One day 20th Century Fox arrived to film a newsreel. Emig related that the Fox news people recruited students from York High School to dance on the platform for the filming. The newsreel, shown nationally in theaters before each feature film, added to the tree house’s popularity.
Brook Leaf Love Nest reportedly kept attracting visitors through the 1920s and 1930s, but in the early 1940s World War II rationing of gas and tires limited traveling for pleasure. The news was war news, awaited by an anxious public. A few local couples, some of which were in the service, still took advantage of the remarkable site for their honeymoon.
On night in 1949, the Emigs awoke to a glow across the meadow. The tree house was destroyed by the fire. There was speculation that it could have been started by a spark from a passing train or by vandals. Mr. Emig thought it might have been caused by vagrants carelessly smoking as they looked for shelter for the night. Whatever the case, the image lives on in the thousands of strikingly inviting postcards of the love nest of Hellam Township.
This writer would be very interested in hearing any memories you have of Brook Leaf Love Nest.