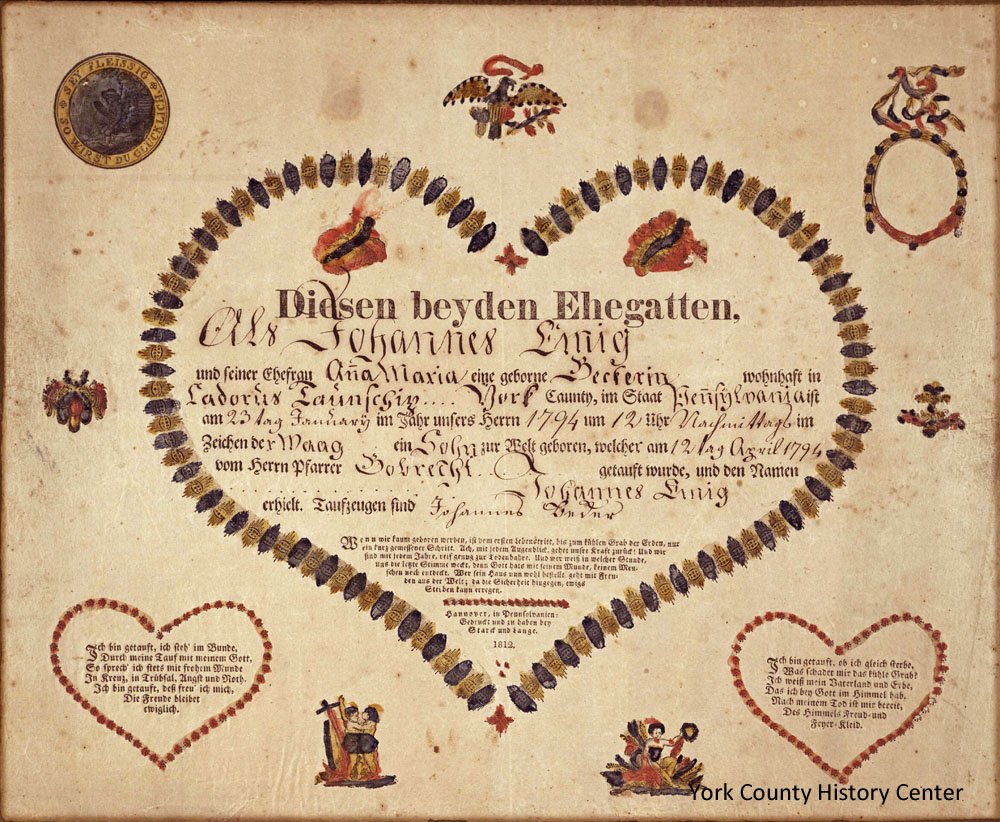 Some months ago I wrote about the Pennsylvania German Birth and Baptismal certificates (often known as Taufscheine or Fraktur) that were produced in the Hanover print shop of Wilhelm Daniel Lepper and Samuel Endredy Stettinius.  These two printers established Hanover’s first newspaper Die Pennsylvanische Wochenschrift, in 1797 and issued their first Taufschein in 1798.

Stettinius moved to Washington, D.C. around 1800 and Lepper had relocated to Ohio by 1808, with the last edition of their Hanover paper issued in early 1805.  Hanover was not without a printer for long, though, as Johann Philip Starck and Daniel Philip Lange soon took up the slack with the first issue of their German Hannover Gazette in April 1805.  Starck and Lange, and their successors, provided the Hanover area with their news, baptismal certificates, and other printing needs for the next 60 years.

My recent York Sunday News column below recaps the history of Starck and Lange’s business and some of the highlights of the interesting personal lives of these two printing partners.

Newspapers in German and English made up most of the production of York County printing presses in the late 1700s and early 1800s.  I started researching the early area printers because they also printed  Taufscheine, birth and baptismal certificates.  It turns out that the personal lives of the printers were often quite as “colorful” as the certificates eventually were.

I previously wrote about Solomon Meyer, the founder and publisher of the German York Gazette from 1796 to 1804, and Daniel May, printer in York from 1829 to 1843.  Another column addressed Wilhelm Lepper and Samuel Stettinius; they were Hanover’s first printers, publishing Hanover’s first newspaper, Die Pennsylvanische Wochenschrift, from 1797 to early 1805.

The first issue of the German Hannover Gazette, published by Johan Philip Starck (d. 1825) and Daniel Philip Lange (1783-1856) came out in April 1805, reportedly produced with the press and type originally used earlier in York by Solomon Meyer for his York Gazette.  Both Gazettes were in the German language, but some other items were produced in English with a Roman font, showing they had bilingual capability.

Starck and Lange’s print shop also generated books and the usual broadsides, pamphlets and various forms.  Their first birth and baptismal certificate was in the popular three-heart horizontal format.  The large center heart with blanks for personal information was formed by small tailpieces of type, as were the two smaller flanking hearts with baptismal hymn verses.  Small decorative metal cuts of an eagle, flowers and small vignettes further embellished the certificates. They issued the three-heart Taufschein in 1811 and 1812.

Around 1813 Starck and Lange brought out a vertical Taufschein.  The rectangular text block was framed with small pieces of type, and that was flanked with woodcuts of a pair of graceful angels with a pair of large birds below them.  Starck left the partnership in 1816, but Lange kept printing the angel certificates until his retirement in 1850, shifting it to a horizontal orientation around 1825; the percentage printed in English increased as the years went by.  Lange’s successors, Schwartz and Gutelius and then V.C.S. Eckert, printed very similar certificates in the 1850s, only with the angels missing, replaced by turning the two birds sideways.  The angel woodblocks might have broken or been sold to another printer.

As were many of the other printers, Lange was an interesting individual.  He was quite active politically, serving in various offices with the county committee of the Democratic-Republican Party, antecedent to today’s Democratic Party.  He was the first town clerk of Hanover in 1815, serving in that post for decades.  Lange served as foreman of the 1851 York County Grand Jury that recommended a new jail, directed that the court house be made more secure and that a hospital addition for “those deprived of reason” be constructed at the county poorhouse.  He also did work for the county that included printing legally required notices in his paper and printing items such as 3,000 tickets for the 1824 presidential election.

This seemingly successful businessman and community leader had some real financial and personal problems.  A September 1824 Sheriff’s Sale notice in the York Gazette notes: “The Printing office and establishment of the Hanover Gazette consisting of a variety of English and German Type, a Press and all the necessary apparatus for printing a German Newspaper, and executing English and German Job work,” were to be sold in October at Daniel Philip Lange’s house in Hanover.  That kind of sale was usually for debt, but Lange somehow avoided the loss, since he kept printing for over 25 more years.  His sister, Sybilla Stauffer, asked the court for more security on D.P. when he, as executor, was settling their mother’s estate in 1846, noting his insolvency.  Mother Elizabeth’s estate papers show he owned his mother money, so perhaps that is how he saved his printing business.

His troubled relationship with his estranged wife, Charlotte Christina Lange, was probably well known in the small community. The Lancaster Intelligencer reported in 1830 that the state had denied the divorce for which he had petitioned.  Charlotte also seems to have tried to get a divorce on several occasions.  D.P. Lange was indicted for adultery in the York County courts in 1842 in a case brought by Frederick Starck, probably on Charlotte’s behalf.  Lange was found not guilty when the case came to trial in 1845.

Lange’s former partner, Johan Philip Starck, and his family provided for Charlotte for many years.  Starck’s will  directed that a part of his estate be put in trust to support Charlotte Christina Lange for the rest of her life, any remainder to pass to Starck’s son Frederick.  Charlotte, age 73, was living in Frederick Starck’s household by 1850.  She died in November 1859 at the age of 83.

I thought Charlotte was perhaps related to the Starcks until I looked at Hanover census records.  The 1850 census says she was born in Germany.  She is listed as black and the Starck family is listed as white in the same census.  In 1830, she is in her own one-person Hanover household, also listed as German born and a “free colored person.”

Daniel Philip Lange sold the printing business to his brother-in-law and former partner, Augustus Schwartz, and Pastor Samuel Gutelius in 1850.  Gutelius left after a year and Vincent Conrad Sebastian Eckert (another interesting character) joined Schwartz before buying him out in 1852. Eckert printed editions of the Hanover Gazette in both German and English until the 1860s.

Lange died in October 1856 and was buried in the Old Reformed Graveyard in Hanover, leaving whatever estate he had to friend William D. Gobrecht, Esq. of Adams County.  Former colleagues Schwartz and Eckert served as appraisers, as shown in Lange’s estate papers on file at the York County Archives.

NOTE: I am still actively researching Pennsylvania German Taufscheine (Birth and Baptismal Certificates) created for York County area children, those born in York and Adams counties and adjoining northern Maryland.  Please contact me at ycpa89@msn.com if you know of any that I have not yet recorded.  I keep all ownership information confidential.