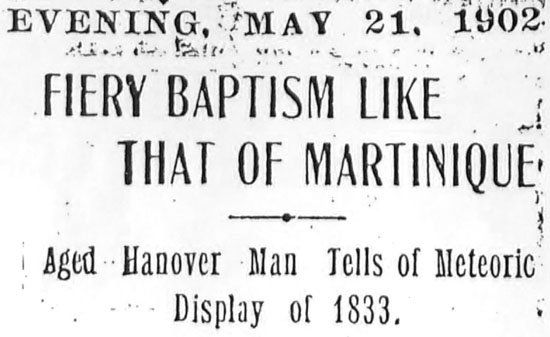 Newspaper stories of the past often have references to things that were familiar to them, but not us. This leads to more research to find out what they are talking about. The item below, from the May 21, 1903 York Dispatch sent me scurrying to find out more about the 1833 meteor shower and, especially, what was the 1902 Martinique catastrophe. Jack o’ Lantern, also known as will of the wisp or swamp gas, is a gas probably caused by decaying vegetation spontaneously igniting, about which little still seems to be known.

Mr. Daniel A. Barnitz of Hanover, now in his 87th year had a very clear recollection of the great meteoric shower mentioned in yesterday’s Dispatch. He was then a young man of 15, and was learning the tanning trade in Gettysburg. He says the meteors began to shoot through the air, with long tails early in the evening, but presented no unusual appearance, and the people went to bed. About midnight thousands and tens of thousands of them darted in every direction, illuminating the heavens more strikingly than any pyrotechnic display ever devised by man, in those modern times. The meteors were not stars from above, but a light vaporous, or phosphorescent substances, that flickered with great brilliancy and then went out like the Jack o’ Lantern of the swamps, as they approached the earth. The people of Gettysburg being affrighted by the strange and unexpected occurrence, stood at the windows for hours, and witnessed the singular phenomenon. Even the most thoughtful persons cautioned their neighbor to stay indoors, for they believed the millennial day had come, and the whole populations might be swept from the earth, like the inhabitants of Martinique were a few days ago. The meteors ceased to fall as the morning dawned. Then only a few here and there could be seen, dim and faded, as lone wanderers through the frosty mist.

When this event occurred in 1833, the county jail at Gettysburg had but one prisoner, a wicked fellow from the mountainous region, who had been hobbled to make his imprisonment secure. When the stars fell, the jailer got frightened and left the door open. The prisoner escaped to a neighboring blacksmith shop, filed off his hobbles while the jailer was looking at the stars, and then escaped to parts unknown.”

Wagner and the others had witnessed was the November 12-13, 1833 spectacular manifestation of the periodic Leonid meteor shower. Accounts estimated that up to a thousand meteors a minute appeared from the constellation Leo. Meteors were not fully understood and newspapers published theories that the display was caused by such events such as electrified air reacting to cold and hydrogen gas emitting from frost-killed plants igniting because of “electricity of phosphoric particles in the air.”

The reference to the island of Martinique refers to the May 8, 1902 volcanic eruption of Mt. Pelée that destroyed the city of St Pierre and all by two of its 28,000 inhabitants.