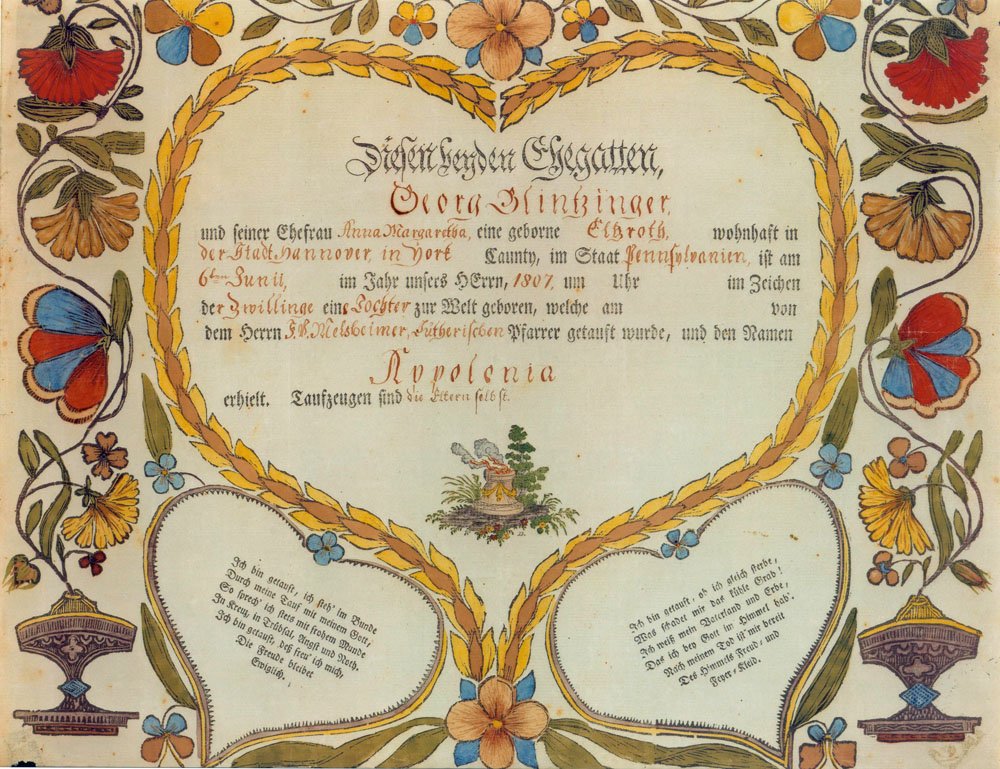 Earlier this year I wrote about Daniel May, printer and newspaper publisher in York from about 1829 to 1843.  He was one of several York County printers to produce Taufscheine, or baptismal certificates, also known as Fraktur.  These colorful certificates, popular from about 1770 to 1870, recorded the birth and baptism of Pennsylvania German children.

This recent York Sunday News column looks at two of the earliest Hanover printers, Lepper and Stettinius and some of their publications:

Hanover and York were the early centers of printing in our area.  We get our news today from many forms of media, but up into the last century there was basically one source—newspapers.  The print shops that turned out those often politically biased newspapers also printed broadsides, forms and anything needed by individuals and businesses, as well as local, state and county government.  Several published books, often religious volumes. York County, which included present day Adams County until 1800, was heavily Germanic, so many of the newspapers and other items were printed in German only or in both German and English versions.  Some of these printers printed Taufscheine, also known as Fraktur, colorfully decorated birth and baptismal certificates, and my field of research. The first printed Taufscheine were produced in Ephrata around 1770, probably as a more efficient and cheaper version of completely hand-done baptismal forms.  Their use spread through Pennsylvania German communities.

Since there was a heavy concentration of German-speaking settlers in the Hanover area, the German language was especially favored there.  Wilhelm/William Daniel Lepper and Samuel Endredy Stettinius established Hanover’s first newspaper, Die Pennsylvanische Wochenschrift (The Pennsylvania Weekly Journal), in April 1797.

By 1798 they issued a Taufschein. It followed the three-heart motif popularized by Reading printers around 1790.  The main text block, ready to fill in with personal information about the child, and two smaller text blocks, with verses of familiar baptismal hymns, were first printed on the press.  These blocks of text are surrounded by heart-shaped outlines.  Other printers used small tailpieces of decorative type to create the heart patterns, but Lepper and Stettinius used woodcuts for heart-shaped wreaths of leaves and for patterns of urns, flowers and vines decorating the sides of the horizontal certificates.  They were then ready to be hand colored and filled out to commemorate the child’s baptism.  After Stettinius left the partnership around 1799 Lepper continued printing the same Taufschein, with minor variations.

Lepper and Stettinius had printed at least two books as partners in 1797, probably the first books published in Hanover.  Lepper then printed several books on his own between 1801 and 1807, mostly religious.  In 1806 he published Catalog of Insects in Pennsylvania in English.  This volume established author Frederick Valentine Melsheimer as the “father of American entomology.”

Lepper came to America about 1795 from what is now Germany, arriving in Hanover sometime before he and Stettinius started printing Die Wochenschrift in 1797. Lepper was probably the senior partner, since the 1798 Glass Tax shows him as owner of a shop, and Stettinius is not listed.  In January 1798 Lutheran Pastor Frederick Valentine Melsheimer presided over Lepper’s marriage to Esther Eyster, whose family had already been here for four generations.  Baptisms of their four children are recorded in the Emanuel Reformed register.

The Leppers moved to New Lisbon (now Lisbon), Columbiana County, Ohio in 1807 or 1808.  He founded a German newspaper, Der Patriot Am Ohio, in 1808, but soon started printing it in English instead, as The Ohio Patriot. His was the first newspaper in Columbiana County and the fifth newspaper printed in all of Ohio.  Leppers can still be found in Ohio, and Lisbon’s public library is called the Lepper Library.

In 1833 William Daniel Lepper sold The Ohio Patriot to Joseph Cable; it continued publication under various owners until at least the early 20th century.  Lepper died in Lisbon in April 1842.

Samuel Endredy Stettinius was born in May 1768.  He and his wife, Mary Ann Hornahowitz, emigrated from Europe in 1791.  They might have been German, Polish or Hungarian and perhaps lived in Maryland before coming to Hanover around 1797.  The first of what would become a family of 10 children was baptized in Hanover in the fall of 1797, and Stettinius is listed as a private in the Hanover militia about that time.

Besides printing Die Pennsylvanische Wochenschrift and other items, including books and Taufscheine with Lepper, Stettinius published two books in German, one religious and one of medical remedies, under his sole imprint in 1798.

Stettinius and his family moved on to Washington, D.C. sometime before the census was taken in 1800.  He does not seem to have continued printing.  His 1809 naturalization papers and other sources give his occupation in Washington as merchant.

Stettinius reportedly died at age 45 while visiting Baltimore in August 1813.  His gravestone in the Congressional Cemetery in Washington reads 1815, but sources say it was installed when he was moved some years later from a Baltimore cemetery and the date is in error.  Congressional Cemetery sounds grand, but in fact anyone could, and can, be buried there.  It is in the Capitol Hill neighborhood, less than two miles from the Capitol building, and some notables such as Vice Presidents Elbridge Gerry and George Clinton, Capitol architect William Thornton, Civil War photographer Matthew Brady, John Philip Sousa and J. Edgar Hoover are buried there.

There was a high government official among Stettinius descendants, however.  His great-grandson, Edward R. Stettinius, Jr. (1900-1949) worked his way up from laborer to a vice president at General Motors; he then chaired the board of U.S. Steel.  President Franklin D. Roosevelt tapped Stettinius for several positions, including leading the Great Britain Lend-Lease program.  He was Secretary of State from 1944 until Roosevelt died in 1945.  At that time President Truman named him U.S. representative to the United Nations.

One last note:  During the last half of the 20th century Samuel Stettinius was identified in error as the creator of many of the watercolor portraits now attributed to Jacob Maentel.  Further research clarified that a good many had been created after Stettinius had died.

I am still actively researching Pennsylvania German Taufscheine (Birth and Baptismal Certificates) created for York County area children, those born in York and Adams counties and adjoining northern Maryland.  I have records for about 2,000 in my data base, but the more we record, the more we learn.  Please contact me at ycpa89@msn.com if you have, or know of, any that I have not yet recorded.  I keep all ownership information confidential.