I hadn’t been to the Haines Shoe House for several years until last week. My eight-year-old great-granddaughter and I were delighted with the tour (as well as the Beck’s ice cream and the home baked treats offered by the owner). It had changed hands not too long ago, and I was impressed by the current owner’s enthusiasm for the roadside icon and its history.

The York County History Center Library/Archives has quite a bit of information on the Shoe House including snapshots of the construction, a few of which I am sharing here. I also found a clipping at the YCHC from the December 18, 1948 York Dispatch. It says the shoe house was to officially open on March 5, the birthday of owner and shoe store entrepreneur Mahlon Haines. For the first year he planned to host older couples there for a week at a time.  It would be provisioned and staffed so that they could “Live like kings.” Haines envisioned hosting 38 couples in 1949, asking the alderman of each ward in the city of York and each burgess [mayor] of each county town to select a couple. The county people could live in a the borough or vicinity.

The refrigerator would be stocked “with the finest beef from his Hereford steers and with lamb and pork, milk and butter from his dairy.” “Hosts” employed by Haines, living on premises, would cook and serve the meals. A small car would “be at their disposal to take them on trips or to church.” Furniture would include a radio and television set, this in a day when many people didn’t yet have a television. He would provide them with movies passes and they could have friends and relatives visit on the Thursday of their residence week if they wanted.

Haines was already planning for the following year. In 1950 he would invite newlyweds for a five-day stay. He noted that the refrigerator would be again stocked, but there would be no “hosts” present, so the bride and groom would be doing their own cooking.

Haines himself selected the furniture, and it is still in place today in the 48-feet-long shoe. He told the reporter that he chose the location close enough to be seen from the Lincoln highway, but not right by the road, “else people might think it was a gas station or some other commercial establishment.” [Not that a giant shoe wouldn’t be a good advertisement.] It can be seem more closely from today’s Route 30, and I don’t think anyone would mistake it for a gas station. I suppose it is somewhat of a commercial establishment, with the reasonable admission and proceeds from sales of ice cream, baked goods and souvenirs contributing to the upkeep. I see it more as an historic house and a fun attraction. I think Haines would be pleased to know people stop by from all over the country and beyond to see what he built and hear his story. Last year they had visitors from all but two states, and more and more York Countians are discovering the big shoe in their neighborhood.

This link to Jim McClure’s York Town Square blog will take you to a recent York Daily Record article on the shoe house by Mike Argento with video by Paul Kuehnel. 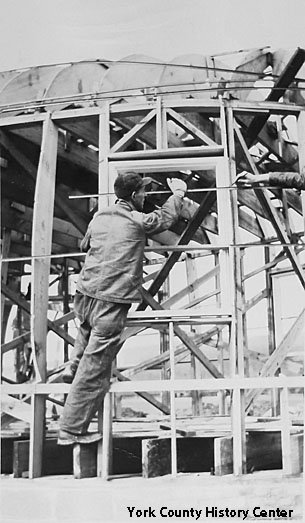