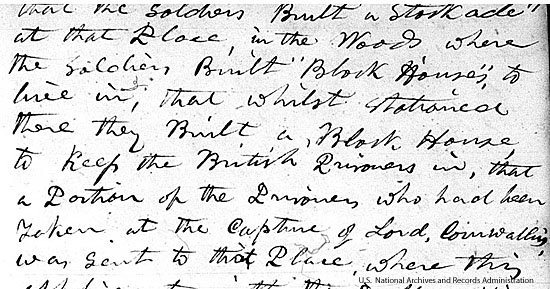 My last post included an excerpt from the April 1834 Revolutionary War pension application supplement of Andrew Anderson. Anderson was part of the militia guard at Camp Security near York in late 1781. As promised, here is a more detailed and slightly different version of the description; this one is from his original December, 1833 application:

“That this applicant, under his third draft, was for most of the time stationed at a garrison or fort in the vicinity of Little York, Pennsylvania where the Soldiers laid a few miles from Little York, that the Soldiers built a Stockade at that place in the woods, where the Soldiers built ‘Block Houses’ in live in, that whilst stationed there they built a Block House to keep the Prisoners in, that a portion of the Prisoners who had been taken at the capture of Lord Cornwallis was sent to that place, where this applicant with the Drafted Militia of York County, under the command of Major William Bailey, who was the highest Officer at that place in command, was employed to take care of and keep guard of the British Prisoners who had been sent there to be detained as Prisoners of War.”

As you can see Anderson is using “block houses” here instead of “log houses,” as he did a few months later. He also used the term “log huts.” Anderson continues:

“That this applicant recollects that whilst so stationed there, he and several others went out into the country to get straw to cover their log Huts, that they got it of the Farmers in the neighborhood of Little York, that the Farmers told the soldiers they might have the straw if the grain was out of it. That Major Bailey sent this applicant along with several others to thresh out a large quantity of grain, that the solders could have the straw for the use of the soldiers, that this applicant assisted in threshing it out, and assisted to bring it into the Camp.”

When Anderson says “soldiers,” he seems to be referring to the local militia, as opposed to the term “prisoners” for the British. He also mentioned the sicknesses that affected the prisoners, as well as the poor rations for the soldiers:

“That whilst the British Prisoners were stationed at this place, a great number of them died of a Complaint which seemed to be mortal to the Prisoners, but did not spread or affect the Americans. That many of the Prisoners died of the Complaint whist at that place.

That for some of the time, the soldiers had nothing to eat but ‘Flour.’ That the soldiers could get no meat, that they got, each man, two pounds of Flour, and lived on that till they could get meat. They lived on Flour, or Bread alone, without meat for two or three weeks. That, after they got meat, that the soldiers were frequently out of Bread as well as meat, during the applicants third tour of three months service.”

This link will take you to the Friends of Camp Security website.

This link will take you to my previous posts on Camp Security.