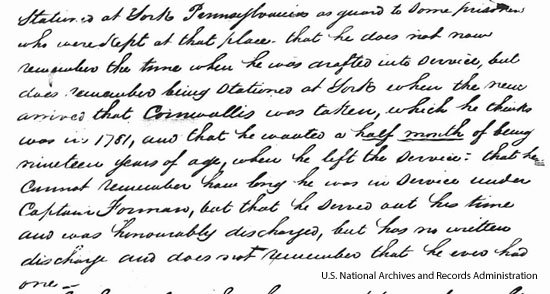 (A public meeting with information on the May/June 2015 dig at Camp Security will be held at the Springettsbury Township building, 1501 Mount Zion Road at 7 p.m. Wednesday March 25.)

There are 42 pages in the Revolutionary War pension file of Manuel Zeigler [Frederick Emanuel Zeigler] at the National Archives. He seems to have first applied on March 27, 1852, at age 89, even though he was applying under the act of June 7, 1832. The 1832 act allowed a full pension if the soldier had served a total of two years during the war and partial pensions to those who served from six months to two years.

I have noticed in other pension applications that even though they would have been eligible much earlier, some applicants did not apply until they were destitute. In some cases, the old soldiers might not have known they were eligible for pensions. Living in Gettysburg among family and friends, I doubt this would have been the case with Manuel Zeigler.

Zeigler’s memory is sketchy in his affidavit about events that had happened over 70 years earlier, but he stated that he was born December 22, 1762 in York County. He served as a substitute when he was 17 for his father, George Zeigler, driving Captain Leonard Eichelberger’s baggage wagon. Manuel says he was drafted later to serve in the militia to guard prisoners at York [Camp Security] under Captain Andrew Forman, he thinks in 1781, being there when news arrived of the Cornwallis surrender at Yorktown. He says he was discharged two weeks before he was 19. Manuel Zigler is listed on Captain Andrew Foreman’s Payroll for militia guards at Camp Security for the period of October 10-December 10, 1781, so his memory is accurate on that.

Sister Sophia Zeigler Leas, 91, and brother Charles Zeigler, 88, both attested to Manuel’s service, but the evidence that mattered was an extract from “Accounts, Militia Debt with United States” from the Pennsylvania Auditor General’s office. It showed that Manuel Zeigler was listed under Andrew Foreman’s pay roll at 10 pounds, 10 pence. Attorney McCreary successfully argued that the amount paid shows that Zeigler served a total of four months as a guard under Andrew Foreman. Combined with the two months previously served under Captain Leonard Eichelberger as a teamster, Zeigler had the six months he needed for a partial pension of $20 a year. The pension certificate was issued February 4, 1854. Frederick Emanuel Zeigler died February 22, 1854 and is buried at Evergreen cemetery in Gettysburg. 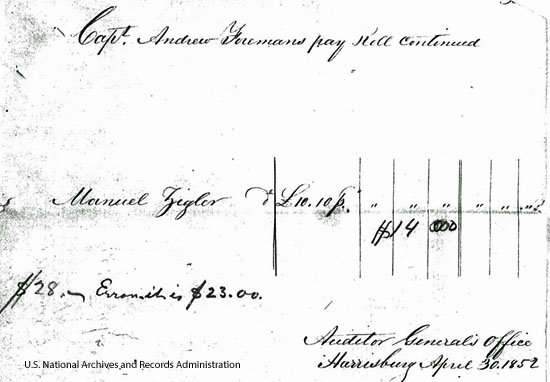 The updated Friends of Camp Security website can be found at www.campsecurity.org