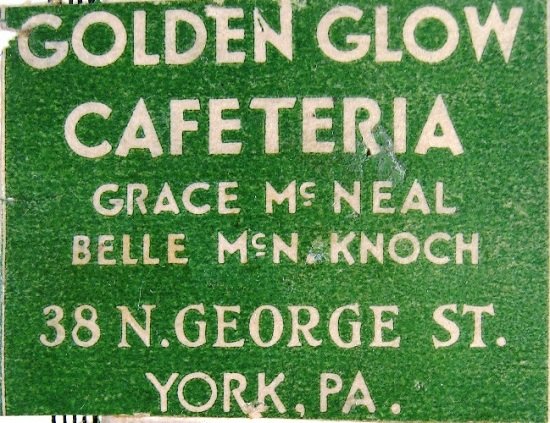 Food stands high in York County memories. Friend and former shop manager at York County Heritage Trust, Carl Preate, emailed me about the popular Golden Glow Cafeteria that was at 38 N. George St. in downtown York from 1928 to 1972. He said he still remembers having his first crab cake there.

York County Heritage Trust Assistant Librarian, Victoria Miller, found quite a few local restaurant photos for her current case exhibit on York County restaurants, so I checked the YCHT photo collection for the Golden Glow. I haven’t come up with any photos yet, but I did find some scrapbook pages with lots of colorful little ads for local restaurants, including the Golden Glow. They may have been trimmed off matchbook covers.

I also found a lengthy article in the YCHT files about the Golden Glow. It was written by Mary G. Stephenson, probably for the York Sunday News, when the restaurant closed after 44 years. It says that the 1972 owners were Al and Ida Knoch, and the cafeteria was founded by Al’s aunt, Grace McNeal and Mrs. Grace Keisey. Customers chose the name from the golden glow given off by parchment lampshades made by the partners.

Many of the employees were young students who came to York to attend Thompson Business School. In 1939 they earned $3 a week and free meals. Al Knoch future wife, Ida, and Mary Stephenson, who wrote the newspaper article, were among those students.

The main road from Baltimore to Harrisburg, Route 111, ran right by the Golden Glow and they also drew a lot of customers from the businessmen staying across the street at the Hotel Penn. By 1972 things had slowed down, with Interstate 83 bypassing downtown and shopping centers and malls sprouting up in the suburbs. Al Knoch closed the newspaper interview on an optimistic note, seeing the downtown attracting tourists and locals, mentioning Central Market as a draw. It has taken a while, but he just might have been right. 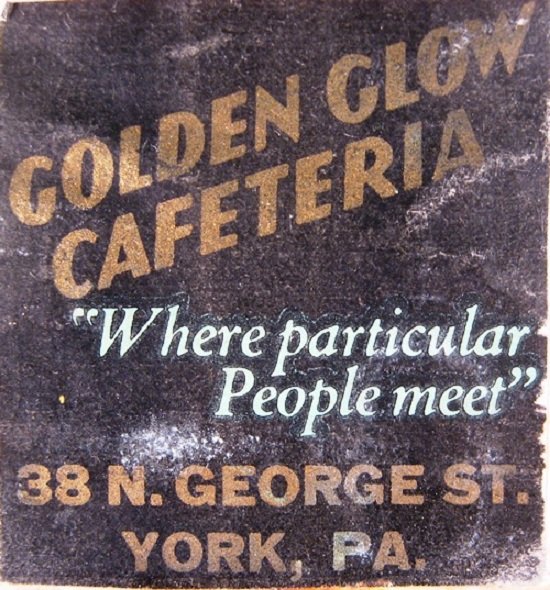