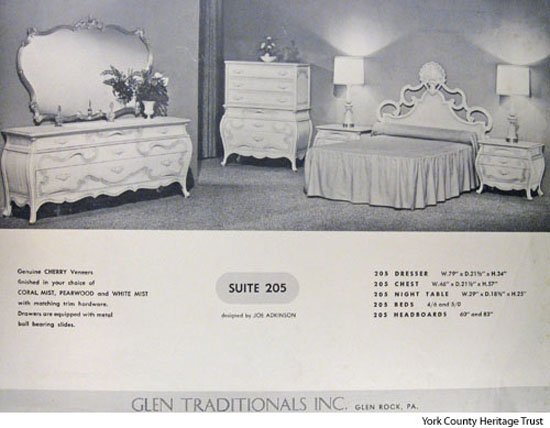 I am still getting comments on my post on Glen Traditionals furniture from three years ago. The furniture was well made, so there seems to still be a lot around after fifty-plus years. Glen Rock historian John Hufnagel was kind enough to share the history of the company, its predecessors and successors, from the 2010 Glen Rock Sesquicentennial book, which is now out of print. See below to learn more about Glen Traditionals and other furniture manufactured there:

S. B. Werner to American Toy Desks to Glen Desks
A tabouret business was started by S. B. Werner in his converted chicken house on the site of the former Glen Traditionals building on Hill Street in 1916. In the spring of 1918, a new factory measuring 28′ X 130′ was completed. Henry Roser was the carpenter. The January 3, 1919 Glen Rock Item reported that Werner had a busy year in 1918. They made 8,576 costumers (these were clothes trees, one was 67 inches tall with four brass hooks and the other was 62 inches tall with nickel plated hooks), produced 10,556 tabourets, 242 magazine racks, 3,453 flat top desks and 6,538 chairs. They worked 13 hour days except for Saturdays, when they worked 9 hours.

On August 8, 1921, shortly before 10 o’clock, a fire was discovered underneath the first floor where a motor was located. It was presumed that this motor overheated, causing the fire that destroyed this building, which had grown even larger than the original 1918 building due to an increase in the firms business. Some office equipment and records were saved as well as several carloads of finished products in the east end. The finished product was removed and stored in a building of the Enterprise Furniture Company. Several barns across the alley on the premises of Mrs. J. B. Schriver, Millard Gerbrick, L. B. Lau, Homer Gemmill, and S. B. Werner were completely destroyed with their contents. The garage of S. B. Werner and the barn of G. B. Miller were also damaged. Also falling prey to the flames was Mr. Werner’s chicken and 20 fowls. The estimated loss from the fire was $25 to $30,000.00

A new, much larger building was rebuilt immediately on the same site and they started to manufacture toy desks and became known as the American Toy Desk Company. During the spring of 1925, Werner found it necessary to enlarge his building. From at least sometime in1929 into October 1935, the firm was called Werner’s Desk Mfg. Co.

Apparently business took a turn for the worse as a bankruptcy sale was conducted on November 1, 1935 for real estate and personal property. A single dwelling house and lot on Hanover Street sold for $1,000.00 and was bought by Glen Rock State Bank. A double dwelling was bought by People’s Bank for $1,200.00. The factory and a two acre lot sold for $5,400 and were bought by People’s Bank. The new owners, People’s Bank, approached Stuart Bahn asking him to run the company. In early February 1936, Stuart Bahn resigned his position at Glen Manufacturing and accepted the position of superintendent of Glen Rock’s newest industry, now called Glen Desks, Inc., a furniture factory. S. Bert Werner was named factory manager of the plant which opened about February 15, 1936, according to the Item. Mr. Stuart Bahn, a stockholder, continued the management of the business until his death in June 1945. Mrs. Madlyn Bahn and Mr. Werner continued operation of the business until January 1946, when they sold the interests of the company.

Glen Traditionals to Hoover Manufacturing
In January 1946, the stock of Glen Desks was purchased by Herb C. Hoover and brother Emerson R. Hoover who continued operating under the name of Glen Desks. In 1955, the company changed from making modern furniture to French Provincial bedroom furniture. For the most part, this new line of furniture was sold in metropolitan New York, New Jersey and in the New England states. The firm maintained year round showroom quarters on Lexington Avenue in New York City from 1956 to the early 1970s. In 1957, the name of the company was changed to Glen Traditionals, Inc. In 1965, the company decided it was to their benefit to have their own transportation for hauling their furniture, so a new tractor-trailer was purchased. They hauled their furniture until 1976. Also, because of the growth of the company, a new addition to the old building was added in 1967. Along with this addition, a large section of the hill behind the factory was removed and made into a parking lot.

With the death of Emerson Hoover in 1974, the operation was taken over by his son, James E. Hoover. The ownership of the company then consisted of Emerson’s widow, Helen Hoover, and Emerson’s children, James E. and Roberta Jean, as well as Herb Hoovers stepson, Robert Keller. In 1986, the company was sold to Thomas Luculano of the Roma Furniture Company in New York. In 1989, Mr. Luculano closed Glen Traditionals and the assets of the company were bought by James H. Hoover, Emerson’s grandson, who started Hoover Manufacturing Company. In 1997, Jim built a new factory outside of Glen Rock, making wood components for other companies until July 2008. In 1996, Jim sold the building at 213 Hill Street to Ray Rohrbach of Red Star Manufacturing. Rohrbach sold the building and the owners moved their Coax manufacturing operation from Enterprise Street into the old furniture factory. In July 2008, Coax Inc., moved out of the building.