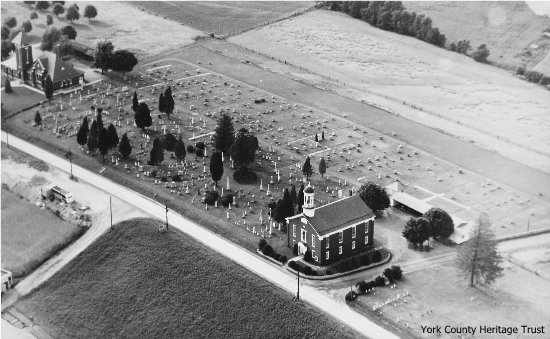 Why aren’t some of the gravestones in the cemetery between Canadochly Lutheran Church and Canadochly Reformed Church in Lower Windsor Township lined up in straight rows like those in the rest of the cemetery? The answer seems to be connected with the date that the church shown in the photo was built.

It’s not certain when the Lutheran and the Reformed people in the immediate area started meeting as congregations. A 1764 constitution for one of the congregations mentions that they first started meeting in a union schoolhouse. The union arrangement lasted through a log church, the first brick church and part way through the life of the second brick church (shown above). This structure was erected in 1867 with 100,000 new bricks and 80-90,000 bricks from the older church.

The geometric curves and evergreen trees in the cemetery? A January 1867 article in the Wrightsville Star about the new building says the churches then jointly held 18 acres of land, and, “…also two additional acres of land purchased a few years since, which has been appropriated and handsomely fitted up for a cemetery near the church, and of which many of the lots have been taken.” This was the era of garden cemeteries, a movement started in Europe in the 1830s of curving roads and landscaping to make cemeteries attractive and park like. Garden cemeteries had come to York County by the 1860s.

Join Lila Fourhman-Shaull, York County Heritage Trust Director of Library and Archives, for her presentation Gone But Not Forgotten: A survey of Historic Cemeteries and Burying Grounds in York County for the Lower Windsor Area Historical Society. The public is welcome to the program on Tuesday, December 6 at 6:30 pm, in the Lower Windsor Township Building, lower level, 2427 Craley Rd. (Rt. 624).

Now, where did the unique name Canadochly come from?

A 1970 York Sunday News puts forth the theory that it originated from a Native American name for the area, Conejohela, which became Conedoughela, then Canaschockley and finally Canadochly. (You have to pronounce them out loud with a real “Dutchy” accent to get the effect.) Some sources say Conejohela meant beautiful valley.