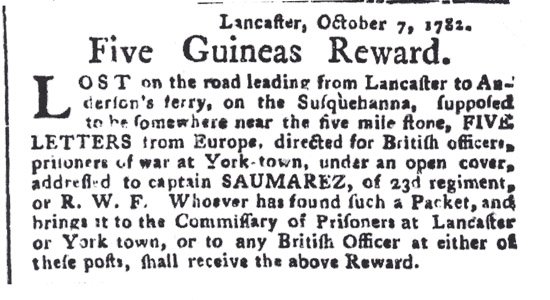 What makes historical research so interesting, as well as frustrating, is that what you find usually leads to a lot more questions. Some time ago, at the Library Company of Philadelphia, I came across the ad above from the Pennsylvania Packet newspaper, published in Philadelphia. I made a copy of it because it refers to prisoners at York-town [Camp Security].

“Lancaster, October 7, 1782.
Five Guineas Reward.
Lost on the road leading from Lancaster to Anderson’s ferry, on the Susquehanna, supposed to be somewhere near the five mile stone, FIVE LETTERS from Europe, directed for British officers, prisoners of war at York-town, under an open cover, addressed to captain SAUMAREZ, of 23d regiment, or R.W.F. Whoever had found such a Packet, and brings it to the Commissary of Prisoners at Lancaster of York-town, or to any British Officer at either of these posts, shall receive the above Reward.”

First–what is a Guinea and what would five Guineas be worth today? A Guinea was a British gold coin. It seems to have been worth about a British pound, which would be about $1.50 today. If that is correct, the reward would have been about $7.50. The gold to mint the coins is said to have come from the Guinea area of western Africa.

Where was Anderson’s Ferry? The ferry crossed from Marietta to Accomac; it was one of several ferries that would have been used to get from Lancaster to York.

Then–who is Captain Saumarez? He was Thomas Saumarez, whose family dates back to before the time of William the Conqueror on the British Island of Guernsey, one of the Channel Islands. Young Captain Saumarez served under Cornwallis and was captured with the rest of Cornwallis’s soldiers at the Battle of Yorktown (Virginia). He stayed in the British military after the American Revolution, eventually becoming a General later in life.

What was his regiment? It was the 23rd Regiment of Foot or Royal Welsh Fusiliers. This brings up more questions, speedily answered at dictionary.com. A fusilier is a member of a British Regiment armed with a fusil. And a fusil? It is a light flintlock musket. A reenactment group, The Royal Welsh Fusiliers in America, has quite a nice website, which includes an image of Captain Saumarez.

Just a few words can lead to some extensive research, but discovering the answers is what makes that research so rewarding.

This link will take you to the two York Sunday News columns and many blog posts I have written about Camp Security.