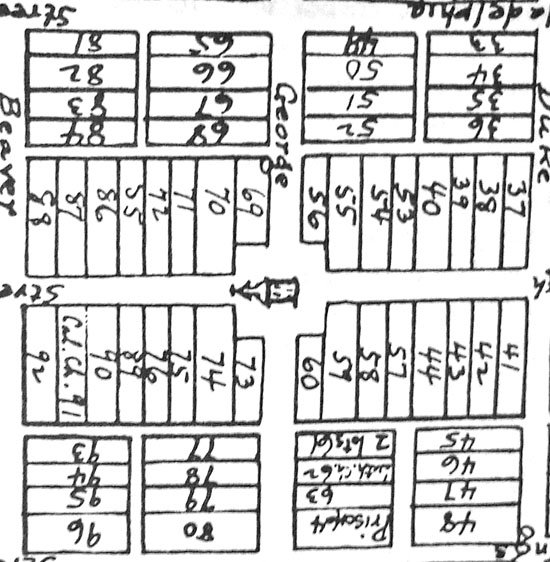 The enlarged section of the center of York above is bounded by Philadelphia, Duke, King and Beaver streets. It shows the square with the courthouse in the middle. I have flipped it form the original so that it is oriented to the north.

As explained in my last post, in 1941 Henry J. Young, then Director and Librarian at the Historical Society of York County (now York County History Center) did extensive research on the owners of the original lots plotted in the town of York. Thomas Cookson, who laid out the first 265 lots in 1741, neglected to file his draft with the Land Office of Pennsylvania. The town was then resurveyed, with additional lots, by George Stevenson in 1754.

For his model, Young used the Stevenson Survey and Alexander’s 1801 plan of York, which included lots west of the Codorus, some of which had been laid out, but not subdivided or numbered. by Stevenson. By consulting many resources at state and county levels to research the lots, Young found they had sometimes passed through several owners in a relatively short time. The results of his findings on the four original lots bounding the square to the east: lots 56, 55, 59 and 60, are transcribed below.

Lot 56: Mathias Sitler, coppersmith, obtained special warrant October 5, 1764; return May 22, 1765; patent to him, May 23, 1765; quitrent £8 sterling. Sitler and wife Catharina conveyed northern half to William Scott, house-carpenter, June 12, 1765 for 5s and quitrent of £4 sterling payable to Sitler March 1 of each year; southeast quarter to Martin Reyle, October 28, 1765, subject to quitrent of £4 payable to Sitler March 1 of each year, Reyle and wife Elizabeth conveyed same to Samuel Johnston, May 10, 1770. Sitler and wife conveyed southwest quarter, together with all papers relating to his interest in the whole lot, to John McMechen of Philadelphia, merchant, for £950, October 6, 1777. McMechen conveyed to John McCallister, gentlemen, March 3, 1779. McCallister conveyed to Archibald McClean, Esquire, September 9, 1780. Penns gave quitclaim on the whole lot to Jacob Barnitz, David Cassatt, Charles F. Fisher and John Fisher for their respective parts, in consideration of £21, April 25, 1809.

Lot 55: Jacob Billmeyer, shopkeeper, acknowledged April 10, 1751 that he had built on this lot illegally, and promised to pay yearly rent of 10s sterling so long as the Proprietaries shall permit him to use the lot; warrant to him, May 22, 1765; return May 23, 1765; patent to him May 23, 1765, partly for the usual considerations and also “in Consideration of certain Services done by the said Jacob Billmire;” quitrent £3 sterling. His heirs conveyed the western half to Andrew Billmeyer, November 4, 1793 and the eastern half to Elizabeth Billmeyer on the same day. Quitrents were released to her and to George Small, April 38, 1809. It appears also that this lot was patented to Jacob Billmeyer October 31, 1752 at a quitrent of 7s sterling; this was apparently done by error.

Lot 59: Thomas Cookson of Lancaster, gentleman, built a house on this lot “for the Encouragement of the Town,” according to his letter of December 4, 1749 to Thomas Penn. Thomas Barwick by Sheriff conveys to Robert Stevenson, shopkeeper, August 1, 1755; Robert conveys to George Stevenson, October 27, 1757, who obtains patent January 24, 1761. Held by Rudy Spangler in February 1800. Quitrents on western part released to Samuel Weiser, September 11, 1818.

The South Central Pennsylvania Genealogical Society has republished Young’s work, Notes and Documents Concerning the Manorial History of the Town of York, York County, Pennsylvania, as Number 47 in their Special Publications series. It can be ordered through the SCPGS website.

Come to the York County History Center’s Second Saturday program on November 12th at 10:30 a.m. My slide show, Changing Crossroads: York’s Square over the Centuries, has lots of maps, drawings and photos of York’s changing squarescape over the past 275 years.