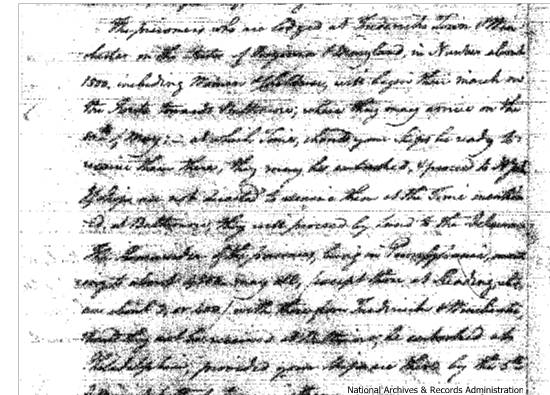 One of the best clues I have come across so far to try and figure out how many Revolutionary War prisoners were held at York’s Camp Security, 1781-1783, is a letter I found at the National Archives from American Commander in Chief George Washington to British Commander in Chief Sir Guy Carleton. (See my recent York Sunday News column below for more on the movement of the prisoners from one camp to another and why the numbers vary.)

I was struck that the details of the release of prisoners at the end of the Revolutionary War was planned by the commanding generals themselves, not by officers somewhere down the chain of command. In the letter April 21, 1783, Washington was giving Carleton a choice as to where the prisoners should be marched so that they could board British ships. The agreement was that they should be marched to the British in New York. But since “their situation being removed to the interior of the country is far distant from New York,” he offered a detailed option that the prisoners in Maryland and Virginia could be picked up instead in Baltimore, or Philadelphia.

Since Washington’s headquarters at the time was Newburgh, N.Y. and Carleton was at New York City, Carleton answered only three days later. He thanked Washington for the offer, but said all his ships were being used. [Perhaps for transporting regular soldiers home.] The prisoners would, therefore, have to be marched to the New York area to be released.

Washington may have been trying to get the prisoners out of American hands quickly so that no more funds would have to be expended to feed or guard them. The exchange of prisoners would have been important to both sides, but I’m still surprised that the arrangements were made at the very top of command.

See below for more on the Saratoga Convention Troops and British soldiers captured at Yorktown and the numbers of prisoners Washington quoted at war’s end.

The past few years I have been poring over some of the hundreds of microfilms of the hand-written, ink-stained Papers of Continental Congress, 1774-1789 at the National Archives, looking for clues about the thousands of British troops detained at Camp Security from August 1781 to May 1783. They are confusingly arranged and there are no entries in the indexes for Camp Security; at the federal level it was referred to only as the Camp at York, or York Town, and frequently lumped in with Lancaster, from which it was administered.

Numbers of the detainees are fluid. Exchanges for American prisoners were done in small groups, with officers especially elusive as they might be paroled or detained at different places. At times substantial numbers of prisoners were allowed to work for private individuals within ten miles of the camp. A good many soldiers were accompanied by wives and growing families. Desertion was rampant, allegedly sometimes encouraged.

The Convention troops were taken when General Burgoyne surrendered to General Gates at Saratoga, N.Y. October 17, 1777. They were not technically “prisoners of war” under the convention (agreement) entered into by Gates and Burgoyne. Congress, meeting at York, was elated by the victory at Saratoga but unhappy with the concessions granted by Gates, mainly that the over 6,000 surrendered enemy troops, which included Canadians, Scots and hired Germans, were to be allowed to return home on condition that they would not take up arms against America again.

Congress started stalling. They knew that even if the troops went home, they could replace other British soldiers and free up fresh manpower to come fight in America. Who knew how many British would just ignore the convention terms? Congress quickly took the tactic of instructing U.S. General Heath, in charge of prisoners, to obtain a detailed listing of the convention troops. Heath replied that he could take down their names, occupations, ages and abode (home) and try to judge their size and complexion. Burgoyne was insulted and said he had released American prisoners in Canada on good faith.

There were many more delays and charges of breaking the convention from both sides that kept the convention troops detained on American soil for five and a half years, until the end of the Revolutionary War. That presented many difficulties for their American captors who had to house and guard them. The British were obligated to provide the detainees with food and clothing or pay for these necessities, which became especially troublesome.

The convention army was marched to Cambridge, Mass., where Heath worried how 6,000-7,000 captives and guards could be housed. Heath spent the winter of 1777-78 pleading with Congress for money for food, clothing and fuel. Cambridge was threatened with destruction from the prisoners tearing down fences and buildings for firewood. Congress was trying to get provision funds from Burgoyne in hard cash. Burgoyne wanted to pay in paper money, which was depreciating rapidly.

Right before the prisoners were moved to Rutland, Mass. in April 1778, Heath thanked Congress for sending some money. He also noted it was not enough to pay the debts for provisions and that the guards were still owed five months back pay.

The convention troops were moved further inland to Charlottesville, Va. in the winter of 1778-79. Heath reported that the captive soldiers felt “neglected and disregarded by the British government,” that “the Germans in particular appear to be much disgusted.” About 5,800 reportedly started out from Massachusetts. Many of the Hessians and other Germans, whose services had been sold by their rulers to the British without their consent, are said to have deserted on that march, which passed through York County. By the fall of 1780, the war moved to Virginia, so the prisoners, about 4,000 strong, were ordered moved to Frederick, Md., with a brief stay in Winchester, Va.

In 1782 they were joined at Camp Security by part of the more than 6,000 troops Cornwallis surrendered at Yorktown, Va. in October 1781. These new British prisoners were more closely confined than the convention troops, many of whom were working under contract for local farmers and craftsmen. Accompanying wives were also allowed to sell items they made at camp and find local work.

In July 1782, in a move to force the British to pay support for the prisoners, Congress ruled that all prisoners be called back to camp and rations cut as low as possible for the soldiers. In addition, provisions were to be stopped for the women and children, and women who could not support themselves locally were to leave for British-occupied New York. (Two months later Secretary of War Lincoln was asking Congress to again allow the prisoners to go out and work, at least for rations; the British still weren’t paying.)

Much correspondence passed between Congress, American Commander-in-Chief Washington, British Commander-in-Chief Carleton and others concerning possible exchanges. Every rank had a different value. At one point in 1781 Burgoyne was ill and Washington urged Congress to exchange him quickly before he died because he was worth 1,040 privates alive. (Burgoyne recovered unexchanged.)

By 1783 the war was winding down. On April 21, 1783 Washington wrote to Carleton concerning arrangements for returning all prisoners. He relates that there are 1,500 at Frederick and Winchester. He addresses the remainder of prisoners, as well as women and children, in Pennsylvania; they numbered 4,500 including 300-400 at Reading. This narrows the numbers down a bit more. Research will continue, but the information we are slowly finding gives us some idea of the historical importance and scope of Camp Security and the effect the camp had on the community.