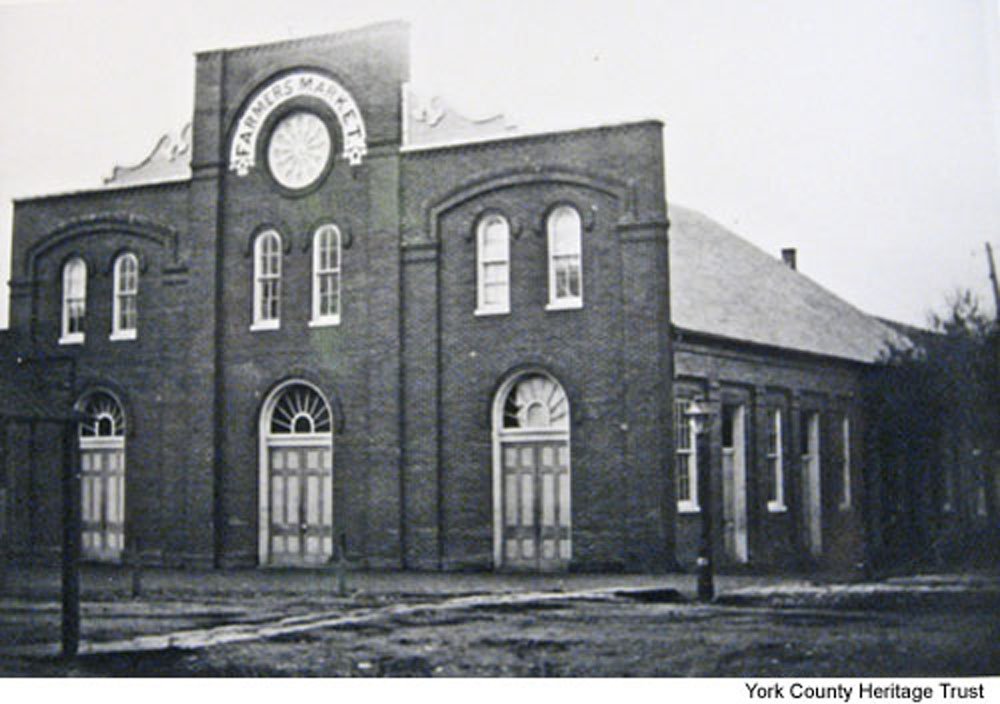 After my recent post on Central Market, I thought I should give the other York markets some recognition too. At the turn of the nineteenth century into the twentieth, York had five thriving farmers markets. Happily two of those survive on their original sites–Central and Farmers. Eastern Market has moved a couple of times, and is now a good bit further east than when it started, but it also thrives–more on that in a future post.
Farmers Market, at the corner of Market and Penn Streets, was the first enclosed market house, as opposed to the open market sheds that were situated in the square in downtown York. Its incorporation was approved by the Pennsylvania Legislature on January 21, 1866 to meet a need of a rapidly growing York population west of the Codorus Creek.
According the Prowell’s 1907 History of York County the incorporators were Jacob Baer, John Winter, Israel Laucks, C. F. Winter, and John H. Bair. Daniel Kraber, Frederick Baugher, Martin Emig, John Winter, Israel Laucks, Philip Eichelberger and Samuel Smyser were the first managers of the market.
Prowell says “The market at once became a success. I has been twice enlarged until it reached its present size, being a conspicuous building on the corner of Market and Penn Streets.”

You can see the enlargement of the facade from the undated older photo at the top to the present day picture immediately above. The reproduction of an older post card on the Farmers Market web site gives another view. I have always thought they did a wonderful job keeping the facade symmetrical when they did the major addition to the front.

Fellow blogger Jim McClure did a post some months ago on renewed interest in the market. The enthusiasm seems to be carrying on. I noticed they had several events this year, and I thought it looked nice and bright when I was in a few days ago. I was glad to see that an old ad painted on the wall for paint from the Hantz Bros., whose hardware store was in the neighborhood, was saved.

Farmers Market has some parking available alongside the building, a nice plus. Metered on-street parking is usually easy to find too if you just need to run into the market for a few things. Just don’t forget to feed the hungry meters.