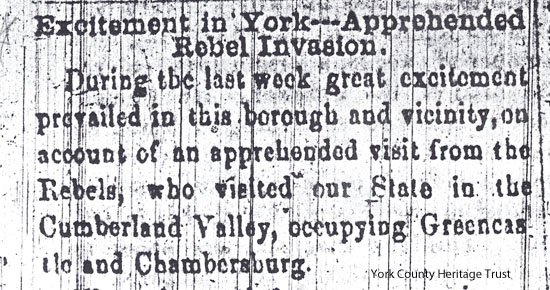 The editors of the June 23, 1863 issue of the weekly York Gazette realized that they might soon have some southern visitors very soon. This time they wrote their own article, instead of reprinting one from another newspaper in the region. It reads:

During the last week great excitement prevailed in this borough and vicinity, on account of an apprehended visited from the Rebels, who visited our State in the Cumberland Valley, occupying Greencastle and Chambersburg.

We understand that two companies are nearly full in this borough, and ready to march at short notice. Volunteering has received a new stimulus, and as the term is only six months, or during the emergency, and the number of troops furnished are to be credited on the draft, there will doubtless be quite a large number of troops furnished from the County. It will be seen from an article from the Hanover Citizen that a company from that place has already repaired to Harrisburg.

On this, Monday morning, the Rebels are said to be at South Mountain, some eighteen miles from Gettysburg on the road from Hagerstown to the latter place. They have retired from Chambersburg and that place is now occupied by our troops. Beyond the taking of horses, cattle, drugs, &c., no injury was done to that place. A couple of railroad bridges were burned between Chambersburg and Shippensburg. A dispatch from Major Haller, in command of this section of the border, now at Gettysburg, informs our people that, there is a considerable force of Rebel cavalry at the South Mountain, and fears are entertained they may come so far as Gettysburg, if not further–Citizens, contrabands and free negroes, are flying in this direction for refuge, and much excitement and feeling of insecurity exists about Gettysburg.

Since the above was in type we learn that one Company, under command of Capt. D. Z. Seipe, left on the noon train yesterday for Harrisburg. Dispatches are received up to noon on Monday, saying that the Rebels have retreated from the neighborhood of Gettysburg. Still great excitement prevails above and refugees are still coming in.