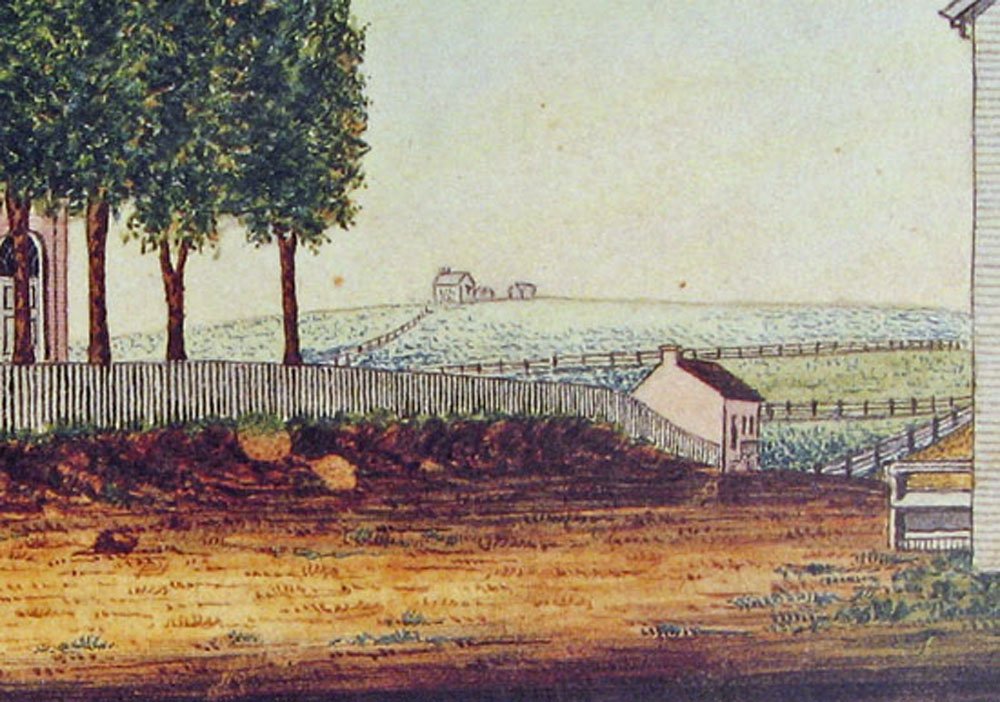 William Wagner’s 1830 view of Upp’s Vineyard
Nearly 200 years ago, around 1818, Thomas Eichelberger planted the area of today’s Farquhar Park in York with vineyards. Others in the area quickly followed with their own vineyards and winemaking operations. In a little over ten years they were holding competitions among themselves for the best domestic wine.
In the meantime, another York native, John Adlum, had started his own vineyard close to present-day Rock Creek Park in Washington, DC. Adlum is perhaps best known for developing and promoting the Catawba grape, still widely grown for winemaking.
There is one vestige of Eichelberger’s vineyard left in York–an alley named Vineyard Avenue. It runs one block up to Farquhar Park from North Street to Park Street between Girard and Newberry. I didn’t see any street signs marking Vineyard when I took these photos, but it is clearly marked on my ADC atlas. 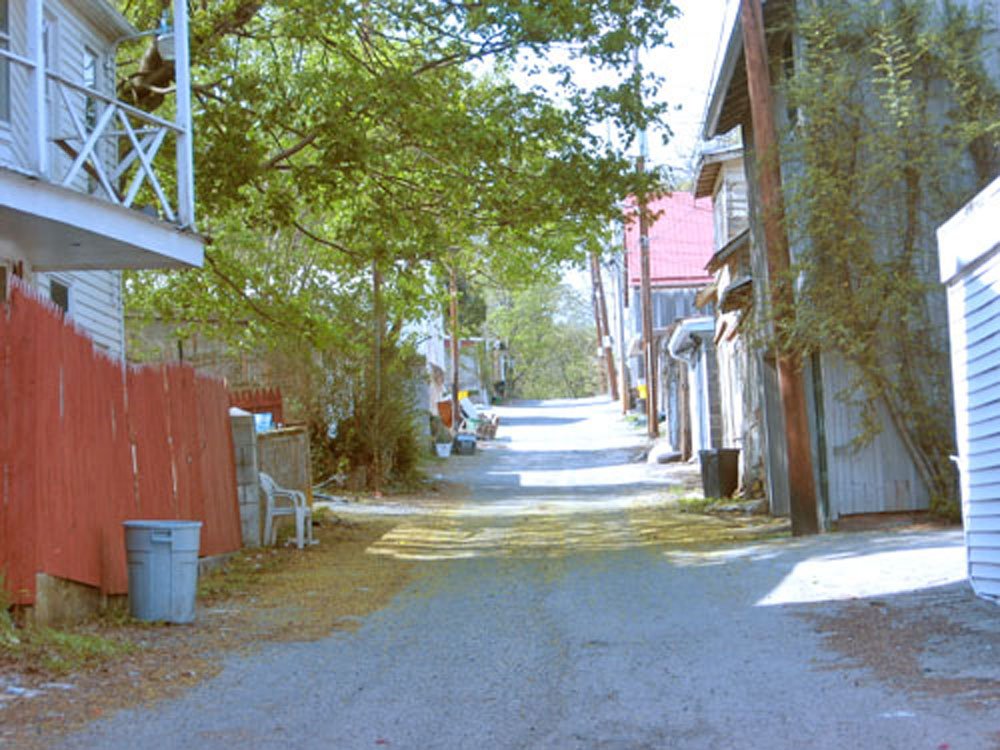 Vineyard Avenue from North Street looking up toward Farquhar Park
I haven’t yet discovered when the vineyards on this hill ceased to be, but a 1946 York Sunday News article says that Farquhar Park was called “the vineyard” by old-timers.
John Adlum’s vineyard? Looking at Goggle maps’ satellite view, that area of DC has sprouted some seriously large embassies.
See below for my recent York Sunday News article with more on Eichelberger and Adlum:

York Natives Were Pioneers in American Grape and Wine Production

While participating in a recent wine tour, I was pleased to see small local wineries thriving. Subsequently researching York County’s wine history, I expected to find John Adlum, who has been called the “father of American viticulture,” but I also discovered Thomas Eichelberger, who an 1826 newspaper article says was the first York vigneron (winemaker). Both Eichelberger and Adlum grew grapes and made wine, but Eichelberger seemed more concerned with producing good wine from his grapes, and Adlum was interested in which grapes grew and produced best in America. Even though Adlum was born and grew up in York, he moved to Maryland before Eichelberger started his vineyard. There is evidence that Adlum maintained ties to York, but it is not known if the two knew one another.
Thomas Eichelberger planted his first vineyard in the vicinity of what is now Farquhar Park around 1818. He seems to have grown some European varieties and also the Alexander, the first well-known native strain. By that time it had been established that grapes grew best on slopes with a southern exposure, in what was regarded as poor soil for many crops. By 1823 Eichelberger’s first four acres of vines produced 30 barrels of wine plus $200 worth of ripe grapes sold to others. In 1826 he had 12 acres in grapes. Each four acres needed a vinedresser, usually an experienced immigrant, to prune and care for the vines. They seem to have been paid by the share for work that was intensive and seasonal, not always a profitable venture. In February 1825, George Wildin, calling himself the “first wine dresser in York,” advertised in the York Gazette that he was “leaving Thomas Eichelberger’s vineyard, because he cannot subsist by it.” He was available to any vineyard planter who could give him “a bargain by which [he] could live.”
By 1829, the Wine Association of York County, whose members included George Upp, Jonathan Jessop, Thomas Kelly and Charles Nes, held a competition at Upp’s vineyard for the best specimen of domestic wine. Upp’s vineyard is said to have also been in the vicinity of Farquhar Park. It is not clear if that was the same vineyard as Eichelberger’s, or was adjacent. Eichelberger himself is listed as a vinedresser in the 1829-1834 York tax lists.
John Adlum, a member of the York Blues militia, is perhaps best known to us for his Revolutionary War memoirs. He was captured at Ft. Washington in 1776 and eventually paroled back to York, where he worked with his father, a skin-dresser. At 21, in 1780, he went to Frederick, Md. to learn mathematics and surveying from his uncle, also John Adlum. He returned to Pennsylvania and became a successful surveyor, working for individuals and for the state, for which he helped survey the Pennsylvania-New York border.
Surveyors were partially compensated with land, enabling Adlum to accrue enough wealth by 1798 to buy a farm near Havre de Grace, Md. and concentrate on agriculture, particularly grapes. By 1802 he was a member of the “Company for Promoting the Cultivation of Vines.” Adlum purchased 200 acres, which he called “The Vineyard” near Georgetown, D.C. in 1814. It was in the vicinity of today’s Rock Creek Park. Adlum corresponded with other interested parties, including Thomas Jefferson, who encouraged him to concentrate on American vines, even though American wine still wasn’t as socially accepted as wine from grapes grown from European stock. Adlum tried in vain to get the government interested in experimental agriculture, so he ended up experimenting on his own.
Adlum is best known as the developer on the Catawba grape, which is still grown extensively for wine. He was more a promoter than developer of the Catawba, also known early on as American Tokay. He relates the story in the appendix to his very successful 1823 Memoir on the Cultivation of the Vine in America and the Best Mode of Making Wine, said to be the first book of its kind. Adlum found that Mrs. Scholl, who kept an inn in Clarksburg, Md. between Frederick and Washington, D.C., had a large vine growing in her garden, which he pruned for cuttings in February, 1819. Returning in September, when the grapes were ripe, he was struck by their quality and quantity. The strain was supposedly first found near the Catawba River in the Carolinas. Adlum continued to develop and promote the Catawba foremost among American varieties. Even though American grapes, which may be accidental hybrids between native fox grapes and European varieties, still were susceptible to fungus and insects, they survived better than imported European stock.
Adlum’s Memoir on the Cultivation… was so successful that he had a second edition published in 1828. He was as good at marketing his book as promoting viticulture–in each copy of the new edition he inserted a facsimile of a letter Jefferson wrote to Adlum, complimenting him on the Tokay (Catawba) wine that Adlum had sent to him.
In spite of promising starts, York County grape growing and wine making seems to have ended by mid-19th century. Demise of the vines was probably causes by fungus and insects that are now more controllable.
In 1920 Prohibition closed down all American wineries. By the time Prohibition was repealed in 1933, the Pennsylvania Liquor Control Board had a monopoly on sales. After a 1968 bill was passed to allow farm wineries to sell on their premises, local vineyards started to sprout up again, bringing back the craft of fine winemaking to York County.