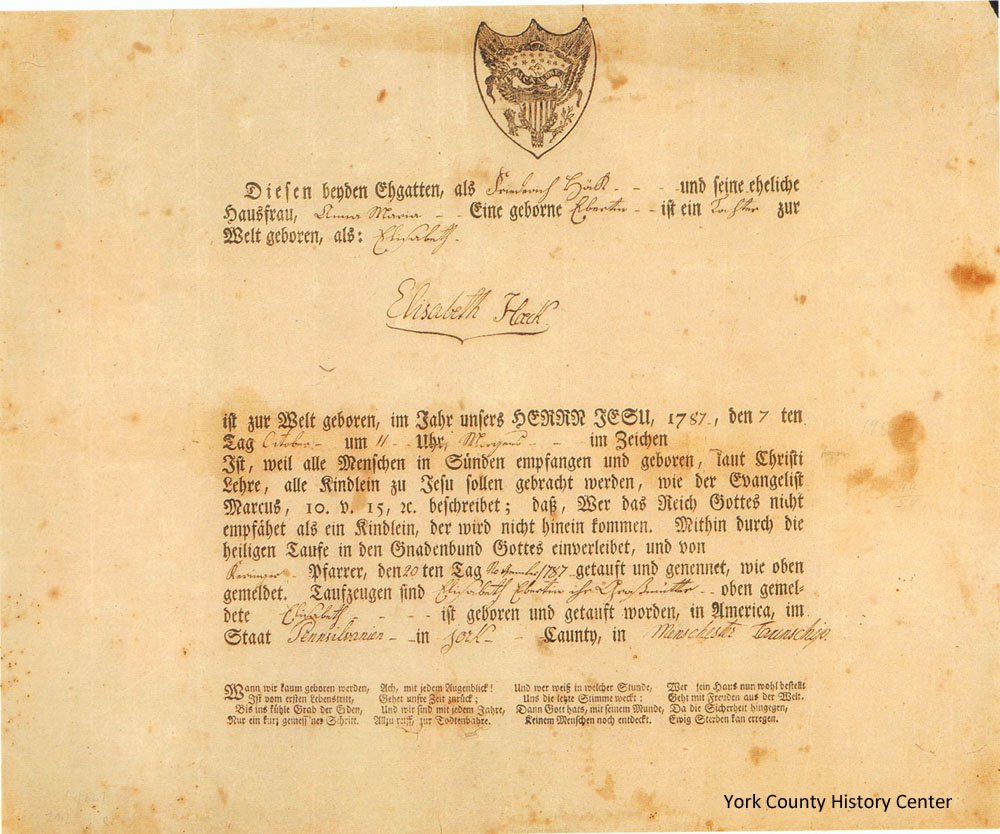 I became interested in Meyer and other York County printers because several also printed Taufscheine, the birth and baptismal certificates that I have been researching for years.  Most of them were also very interesting individuals, especially as they used their newspapers as a political platform.  One good example is Solomon Meyer, the subject of my recent York Sunday News column, which I have shared below.

Solomon Meyer of York and his printing press.

As I have pointed out before, printers were essential in York County over two centuries ago.  The newspaper printing office provided virtually the only source of news, as well as all the forms and blanks needed by businesses and governments.  They printed books and acted as a bookstore.  Some, but not all, printed Taufschine, the baptismal certificates filled out and often colorfully decorated to commemorate an important occurrence in a child’s life. Solomon Meyer inaugurated the Die Unpartheyische York Gazette (The Non-partisan York Gazette) in early 1796.  He was also an early printer of Taufschine in York County.

A lot has been written about the busy life of Solomon Meyer, but there are still elusive facts.  Walter Klinefelter did extensive research on Meyer, and his article “Solomon Meyer, Printer and Publisher,” filled an entire 20-page issue of Der Reggeboge (the Pennsylvania German Society journal) in the 1970s.  Meyer published an autobiography in the York Gazette in 1796, saying that he was born 15 miles from York. He might have been born in what is now Washington Township, York County around 1762, where some Seventh Day Baptists had settled; some think he might have been born in Dauphin County, where his father owned property.  As a teenager, he was sent to the Ephrata Seventh Day Baptists to learn the trade of printing. Leaving the Cloister print shop in his 21st year, he moved nearby into his own printing and bookbinding shop, which he operated for 13 years, until he moved to York in 1796.

Meyer printed at least eight books in Ephrata in 1794-1795, including an ABC book for the German Reformed denomination; schools then were conducted by churches.  He also published almanacs in Ephrata and York. An ad for Salomon Mayer’s Pennsylvanischer Calender auf das Jahr Christi 1797 gives locations  where it could be purchased: McAllisterstown [Hanover], Carlisle, Harrisburg, Middletown, Lebanon, Ephrata, Philadelphia, Lancaster, Reading and Frederick, as well as York. (The York County History Center has several editions.)

Newspapers were the bread and butter of printers.  Meyer published his German York Gazette every Friday morning on High (Market) Street “between David Candler’s store and the Reformed Church.”  Price was three pence each or 10 shillings for an annual subscription.

Meyer published reprints of books, but also some originals, such as handbooks for dyeing and distilling that he copyrighted in May 1797.  He carried an amazing variety as a bookseller; the front page of the September 2, 1796 York Gazette lists hundreds of titles he had available in German and English.

The aspect of Meyer’s printing that interests me most are birth and baptismal certificates.  In February 1797 Meyer ran a small German language ad for “Tauf-Scheine.” The ad translates to “Baptismal Certificates, made on writing paper, clean and finely printed, to be had in this printing office.” This is the only ad found so far for Taufscheine in York County papers.

Printed Taufscheine expert Dr. Klaus Stopp attributed many Taufscheine with no imprint to Solomon Meyer’s print shops in Ephrata and in York.  They are all similar, a horizontal rectangular form with borderless blocks of type, leaving spaces for the infill.  A common baptismal hymn is printed in smaller type at the bottom.  The only printed decoration is either an Angel Sophia (Cherub head with two wings) or an American eagle with patriotic shield positioned at top center.  Many have infill in the distinctive hand of the yet-unidentified scrivener nicknamed Pseudo-Otto; they are decorated with cruder copies of the wood blocks of birds, flowers and vines used by the well-known Henrich Otto.  The connection between Henrich Otto, Pseudo-Otto and Solomon Meyer is elusive.

One other Taufschein was printed in York in 1797 by Solomon Meyer.  It is of the three-heart design, with the borders made up of tiny pieces of type.  The imprint, in German, reads that it was printed in York by Salomon Mayer in 1797. The infill and decoration are similar to those of Pseudo-Otto.

Politics were a hot topic then. Even though the full name of Meyer’s newspaper included “non-partisan,” he and his paper were definitely anti-Federalist (antecedents of today Democrats).  York had some staunchly Federalist newspapers, such as the York Recorder, and their editors and Meyer did not hesitate to trade barbs.  He also had a long running feud with Jacob Lahn, editor of the strongly Federalist Neue Unpartheyische Lancaster Zietung and Anzeiger-Nachrichten (New Impartial Lancaster Newspaper and Advertiser News).

The biggest controversy in which Meyer became embroiled started with his support of Anti-Federalist Thomas McKean as candidate for Governor of Pennsylvania in 1799.  He was accused by Lahn’s Lancaster paper of publishing a long list of 160 persons who he said supported McKean at a “so-called” Hanover convention, “without the knowledge and desire of more than half.”  Shortly after McKean’s win, he appointed Meyer the Brigade Inspector of the York County militia, a salaried and responsible position.  Federalist papers responded that Meyer had “as little knowledge of military affairs as a Jack Ass of dancing.”  His partisanship in preforming his duties led to dissatisfaction and militia members failing to report for drill, resulting in fines collected by Meyer. The York Recorder said he cared more about the fines than maintaining morale.

The Recorder intimated that fine irregularities led Meyer to suddenly sell his large house and print shop and move with wife Salome Hershberger Meyer and their large family of young children, to Washington, D.C. in 1804.  There he became an innkeeper, operating the Pennsylvania House and Centre Tavern on Pennsylvania Avenue. Some years later he moved to Winchester, Virginia, also running a tavern there.  News reached York that Solomon Meyer died in early March 1811, leaving his wife and eight children.  Meyer’s life was fairly short, only about 50 years, but he crammed at lot into it.

I have been researching York County printers of Taufscheine for several months. I will be doing a presentation on Hanover printers next June at the annual meeting of the Pennsylvania German Society.

I always appreciate knowing about any of the birth and baptismal certificates that I have not already recorded, especially for York County area children (York and Adams counties and neighboring northern Maryland).  They can be either completely hand done or filled in on forms done by any printer, York County or not.  I keep all ownership confidential. You can contact me at ycpa89@msn.com.