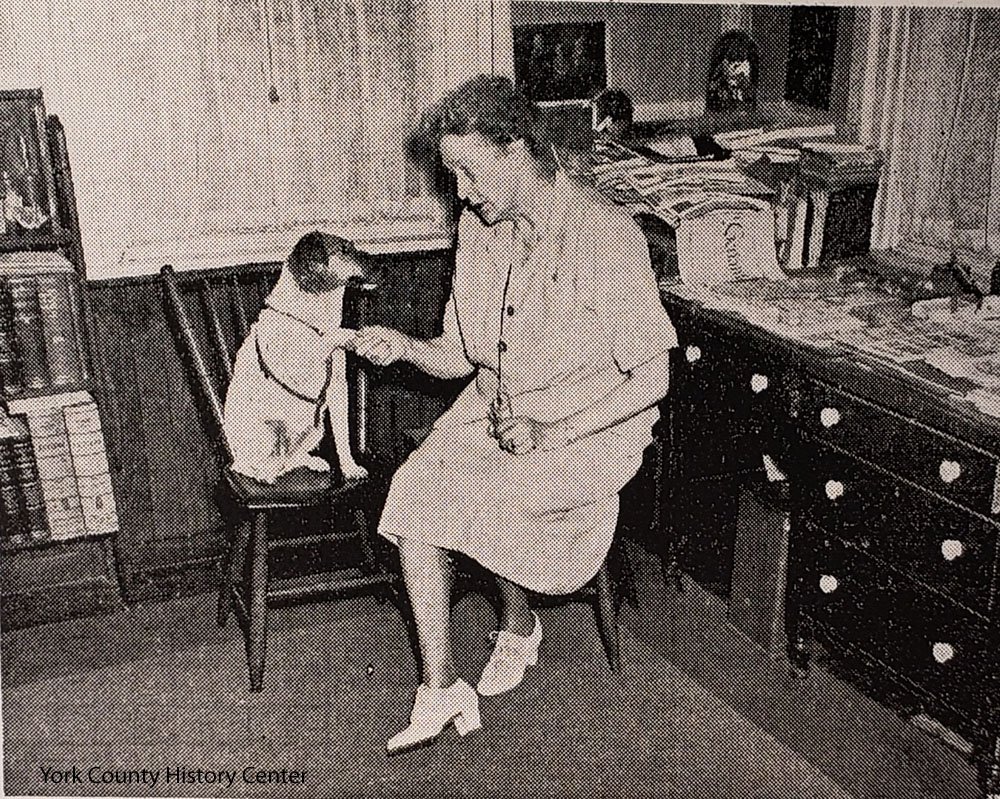 Suppose you were ready to spread your toast and the margarine was white instead of yellow.  It is not very appealing, is it?  Some of you might remember when margarine came packaged with a capsule of yellow food coloring; it was mixed in at home to make the spread look more appetizing.  In many states the dairy industry had convinced legislatures to make it illegal to sell yellow margarine because it competed with butter sales.  A Pennsylvania Federated Woman’s Clubs campaign, led by Dr. Martha A. Bailey of Dillsburg, successfully persuaded our legislators to allow yellow margarine sales in 1951.

Dr. Bailey had many more successes in her life as a country doctor from 1920 to 1961, some of which I relate below in my latest York Sunday News column.  She was an advocate especially for the oldest and youngest citizens. Was Dr. Bailey perhaps your childhood physician?

From an early age, Martha was fascinated with her father’s medical practice, often accompanying him on house calls throughout the countryside and even assisting in his office.  Reminiscing for a reporter in 1951, she recalled climbing up on the operating table to comfort injured children as her father treated them.  She said an older lady would reward her with a peppermint stick for holding the basin when the patient came in for bloodletting, and proudly related how she could pour medicine from one bottle to another with no spillage.

What might have seemed a sure path to join the ranks of the few York County female doctors met a detour when her father died when she was only 10 years old.  After local schooling, she graduated Wilson College in 1903 as a teacher.  Martha taught for the next 11 years, including a year at an Alabama Presbyterian mission school for African American children.

Still she felt called to medicine; since her father’s alma mater, the University of Pennsylvania Medical School, did not yet admit women, she enrolled at the Woman’s Medical College in Philadelphia. (York physician Dr. Laura J. Dice, the subject of last month’s column, was an 1890 graduate.  It is now part of the Drexel University College of Medicine, one of the highest ranking medical schools in Pennsylvania.)  Dr. Bailey obtained her degree in 1917 and worked for three years in Philadelphia, including a grueling stint assisting several other female physicians during the 1918 Spanish flu epidemic.  The flu hit Philadelphia hardest of all; sources report 12,000 died there in just five weeks.

In 1920 Dr. Bailey turned down an appointment to teach gynecology at Woman’s Medical College to return to Dillsburg and reopen her father’s practice, dormant for 28 years.  The 38-year-old was hardly settled at her father’s desk when people started flocking in asking for medicines her father had made.  In 1925 she furthered her education by travelling to Vienna for advanced studies in gynecology and endocrinology.

She found some competition from local powwow doctors, but she was gratified when, after bringing a boy in the hills out of convulsions in a house full of bystanders, she overheard a powwower tell others that he had not known how to treat the boy, but she did.  That “hex doctor” later called on her to treat his family and also taught her some of his cures.

Bailey cared about her patients’ financial and mental health as well as medical needs.  She said that she had more than once attended a birth by the light of a flashlight under her arm, with the family having nothing but old newspaper in which to wrap the new baby.  After attending an early mental hygiene clinic at Johns Hopkins, she was instrumental in founding a clinic at York Hospital; it was first served by a Harrisburg doctor coming once a week to meet with “disturbed patients.”

Employed for four years by the Pennsylvania Department of Health, Bailey set up many maternal and child health centers in communities of 5,000 or less, conducting regular examinations of preschoolers.  The worst fault she found in the numerous one-room rural schools she inspected for the health department was that the students had no place to wash their hands.  She wrote and directed a film for the state on preparing for a new baby and caring for it.  It was a hit at fairs all over Pennsylvania, partly because people viewed the segment of a young father bathing a baby as comedy.  She said police were called out to handle the crowds at the Farm Show screening.

Although interested in child welfare, geriatrics was high on her list.  Bailey supported feelings of security, regular complete meals and keeping mentally active essential for elders.  She used her mother as an example.  Josephine’s 1938 obituary states that, at 98, she was believed to be the oldest York County resident at the time.  Just three years earlier, Josephine had sent President Roosevelt, who shared her birthday, a quilt for his Warm Springs Sanitarium and received a personally signed thank you letter. In 1957 Dr. Bailey was one of three York countians named by Governor George Leader, along with 14 others, to make a study of problems of aging Pennsylvanians. They were charged to determine needs and resources; work with governmental and other organizations and institutions to expand and improve services, increase public awareness and report findings to the governor with recommendations for action.

Although a late starter in her chosen career, Martha Bailey garnered many rewards recognizing her very active medical and social activity.  These included the Pennsylvania Week award “for being an outstanding professional woman,” the significant Distinguished Daughters of Pennsylvania medal and the Commonwealth Citation from the Woman’s Medical College of Pennsylvania.

With all of Dr. Bailey’s accomplishments, the most visible may be yellow margarine. When oleomargerine first became widely available in the 1880s North American dairy farmers recognized it as a threat to the butter industry.  Many states banned yellow colored margarine, allowing it to be sold only in natural unappetizing white. Manufacturers then packaged it with a  capsule of yellow coloring, which had to be mixed through the product.  Bailey thought the lower priced spread, already colored, should be available to all. The chairman of the Pennsylvania Federated Woman’s Club credited Bailey for leading the cause in the Pennsylvania legislature.  Representatives may have become convinced when a huge wheel with 500,000 yellow slips advocating yellow margarine, signed by Pennsylvania women, was wheeled into the assembly chamber. York County’s state senator, George M. Leader, and state representative, George A. Goodling, were among those for allowing the sale of the yellow spread, which became legal in 1951 in Pennsylvania.

Bailey retired from practice in 1961, at age 79, because of a medical condition that severely impaired her sight.   She told an interviewer that she did not regret choosing the role of a country doctor over the city: “the people were the compensation.” 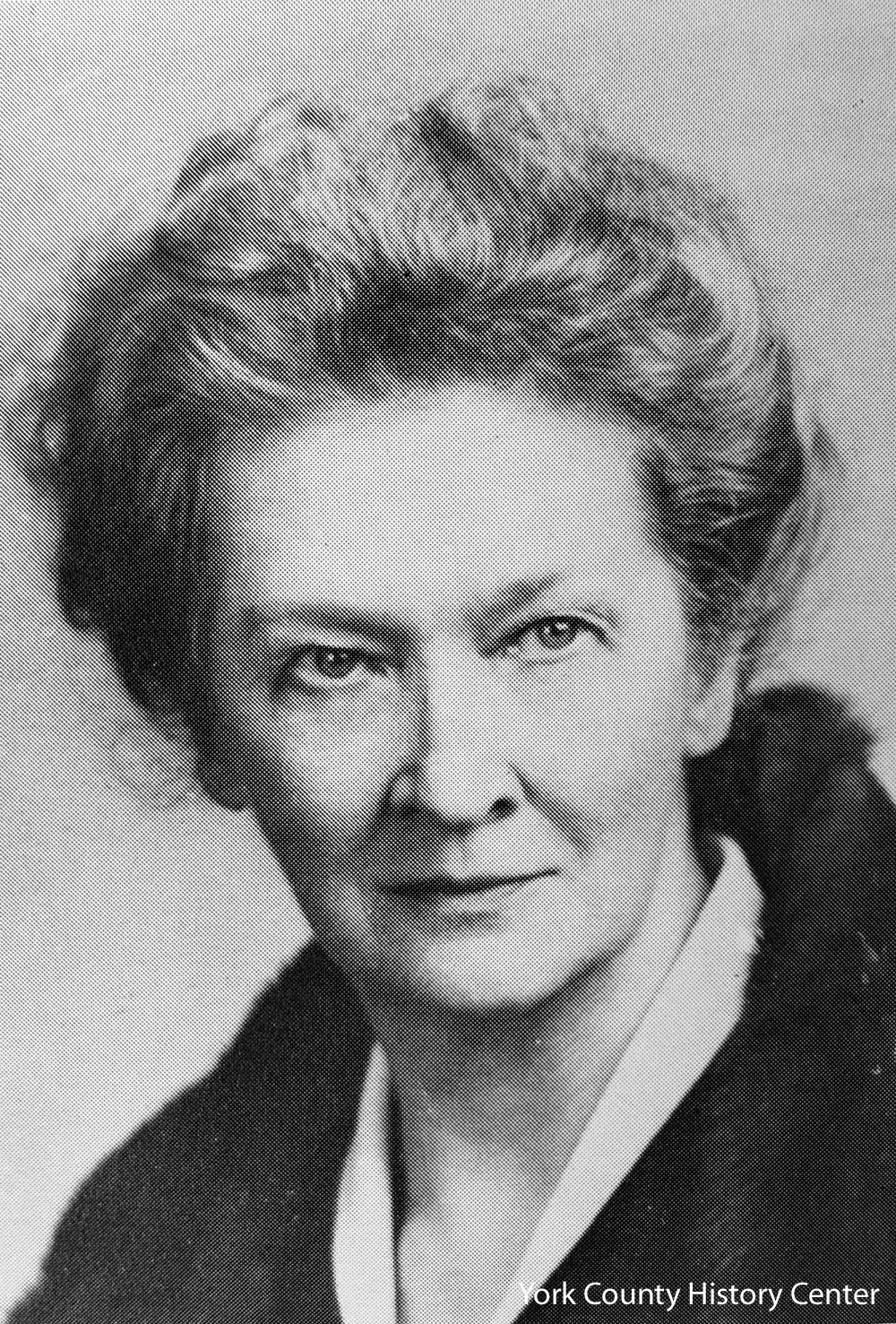 Dr. Martha J. BaileyMore women physicians practiced in York County during the late-19th and early-20th century period than I realized. Here is a link to my last month’s column on an earlier physician, Dr. Laura J. Dice.  I will share information on some of the other women later.

In his Yorktown Square blog, Jim McClure reports that, even in the mid-20th century, Dr. Rachel Witmyer, one of the founders of West Side Osteopathic Hospital (predecessor to Memorial Hospital) found that she was not totally accepted.

All these women paved the way for many members of our current medical community.