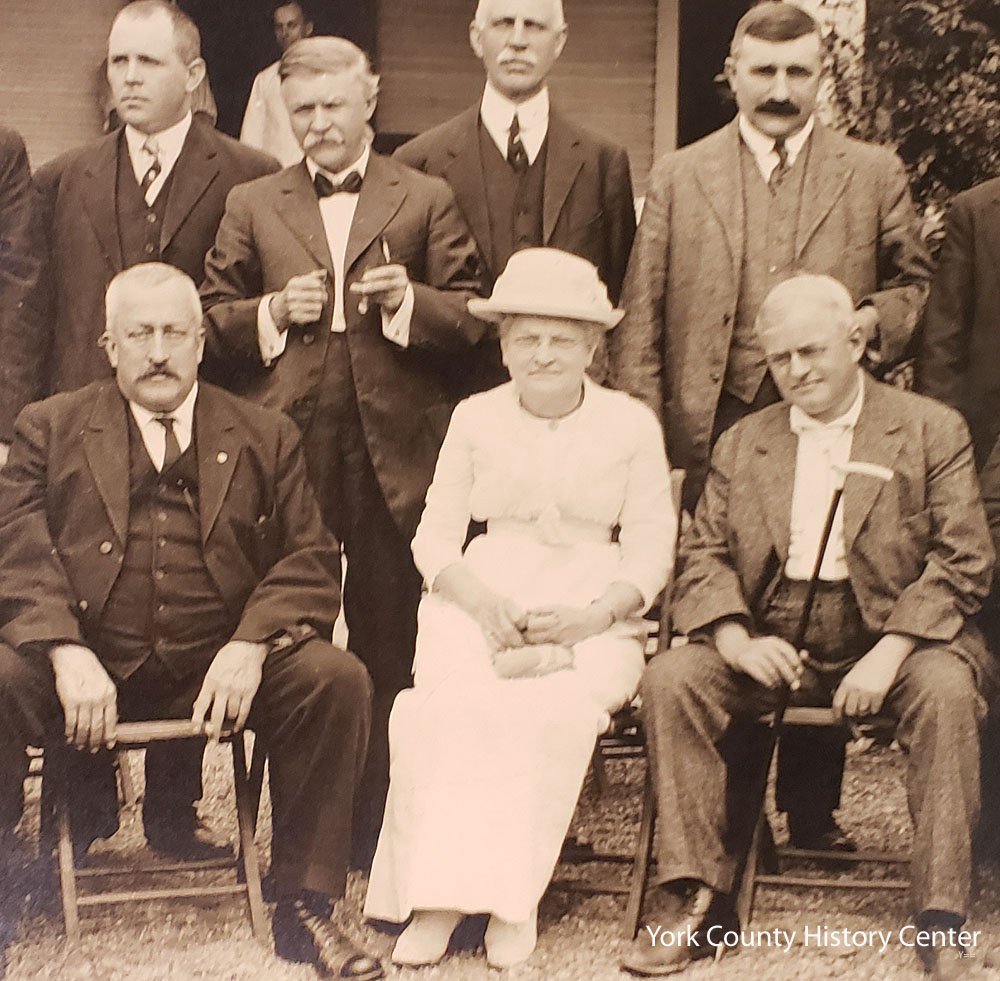 Dr. Laura Dice’s name came up when I was researching the local Woman Suffrage movement in the second decade of the 20th century.  Dice was an active participant in that effort. I wondered about her medical practice and how many other women physicians practiced in our area around the turn of the century. I discovered were several others, but they are not going to take more time to research than Dr. Dice, since she often appeared in the newspapers with her activities with the York County Medical Society, the York County Committee of the Pennsylvania Woman Suffrage Party, the Woman’s Club of York and York’s Crittenton Home, but I have not found other women yet who practiced so long and were so civically active.So far, in the 1890s and early 1900s, these other women are listed as physicians in York:  Adeline Martin Rea (husband Charles was also a doctor), Lillian R. Safford, Byula Ullman, Sara (Sallie) Saltzgiver and Julia T. Hill Crawford.  I will be looking for more on these women, but if any of you know anything about them, or any other women who were practicing medicine in York County over a hundred years ago, please let me know.

“Dr. Laura J. Dice was one of York County’s earliest women physicians.  As the only woman member of the York County Medical Society for many years, she seems to have been completely accepted by the male doctors.  She presented papers in rotation with the other physicians, was the secretary of the county society and represented YCMS at Pennsylvania Medical Society and American Medical Society meetings.  All this was over 100 years ago, before most American women even had the right to vote.

“I first came across Dr. Dice in the papers of Anna Dill Gamble at the York County History Center while researching the Pennsylvania suffrage movement of 1914-15. Dice was the treasurer of the York County Committee for Woman Suffrage.

“Laura Jane Dice was born at Scotland, Franklin County, Pa. in 1852.  She became a teacher, but in her thirties decided to study medicine, graduating as a M.D. in 1890 from the Women’s Medical College in Philadelphia.  She practiced for about a year at the West Philadelphia Hospital for Women. Then a small item appeared in the April 8, 1891 York Daily that Dr. Laura J. Dice was visiting her sister, Mrs. Fallon, in York and that Dr. Dice intended to practice in York.

“Dice didn’t take long to get established.  Two weeks later, under ‘Professional Cards’ in the Daily, her announcement appeared among those of other local physicians.  It read: ‘Dr. Laura J. Dice, 325 West King Street. Diseases of Women a specialty.  Has had Hospital Experience. Hours 7:30 to 9:30 mornings, 2 to 4:30 afternoons.’

“From then on Dice seemed to hold a significant place in the York County medical community, as well as other local benevolent endeavors. Her office was later situated at 115 West King Street and then 135 S. Queen Street.

“News accounts tell of scholarly papers presented at medical society meetings.  Dice’s usually pertained to her specialty of women and children.  In October 1896 she presented a ‘well written paper on Eclampsia’ (high blood pressure and seizures during pregnancy). In 1898 her subject was Phlegmasia alba dolens (blood clots in the leg during late pregnancy or postpartum, sometimes resulting in loss of limb).

“The 1904 Pennsylvania Medical Journal reported on Dice’s ‘well prepared and timely paper’ on ‘Artificial Feeding of Infants.’ She specified the type of bottle to be used if a mother could not nurse, stressing cleaning and sterilization.  Her advice was to obtain blended milk from several cows, and she advocated the fairly new practice of commercially Pasteurizing milk.

“In 1908  the state journal summarized her treatise on ‘Anatomy of the Female Pelvis in Its Relation to the Fetal Head. ‘ All of her papers were discussed by her male colleagues on an equal basis with their own. The York County Medical Society had 78 members in 1906, with Dice the only woman.  A very few other women doctors did practice locally from time to time in the late 19th and early 20th centuries; they were occasionally guests at YCMS meetings, but Dice seems to be the only official woman member.

“Items appeared occasionally in the news about Dice treating others besides women and babies, sometimes following an accident in her neighborhood.  For example she and Dr. Roland Jessop were summoned to reduce (set) the fractured arm of Mrs. R. A. Paules, 513 West King Street, after Mrs. Paules tripped on her way to church in May 1910.

More severe was the earlier case of Walter Allison, a York Chemical Works employee who blew a valve off a nitric acid pipe while trying to thaw the valve in February 1904.  Allison jumped into a nearby barrel of water, but still suffered bad, potentially scarring, burns on his face, arms and shoulder.  He was taken to his Queen Street home, just a few doors from Dice’s office, and she dressed his burns.  He was reported in pain, but not critical.

“The December 23, 1904 Daily reported that John C. Fallon, proprietor of York Planing Mills and Laura Dice’s brother-in-law, broke his hip when he fell on an icy sidewalk.  Dr. H.R. Lecrone and Dr. Dice reduced his fracture at the Fallon residence on West King Street, but it was thought he might not recover since he had recently been treated for heart problems in Philadelphia.  Sadly, that was true, with Fallon passing away December 28.

“An account from the December 5, 1911 Daily belongs in the “what were they thinking?” category: “BITTEN IN NOSE BY DOG. William J. Miller, grocer, residing at 221 Prospect Street was bitten in the nose Sunday evening while playing with his pet dog. Mr. Miller has been in the habit of feeding his dog peppermint lozenges, and had inserted one of the candies between his teeth, when the dog in an effort to secure it leaped for his face, biting him in the nose and lip. Dr. Laura J. Dice dressed the wound.”

“Dice was active in the York Woman’s Club, participating in their June 1913 ‘Baby Saving Show,’ at the Coliseum theater. She chaired an exhibit there on Oephthalmia, preventable eye disease in infants.

“She was one of the 1896 founders, with her sister Mary Catherine Fallon and others, of York’s Florence Crittenton Home.  She also was the home’s physician.  The Crittenton homes in various cities were refuges for unmarried pregnant girls and women as well as females who were homeless or abused.  They were given shelter and helped to get back on their feet.  The York County History Center has original records from the home; I will write about it in the future.

“At age 66, Dice was still evidently practicing in early 1918.  At that time, she was bequeathed the medical equipment of long-time York physician and historian Dr. Israel Betz.

“Several of Dice’s brothers settled in Washington state.  She passed away on a visit there in March 1924 and is buried in Walla Walla County, but she leaves a lasting legacy right here in York County. “

(This Pinehurst was in the York area.)