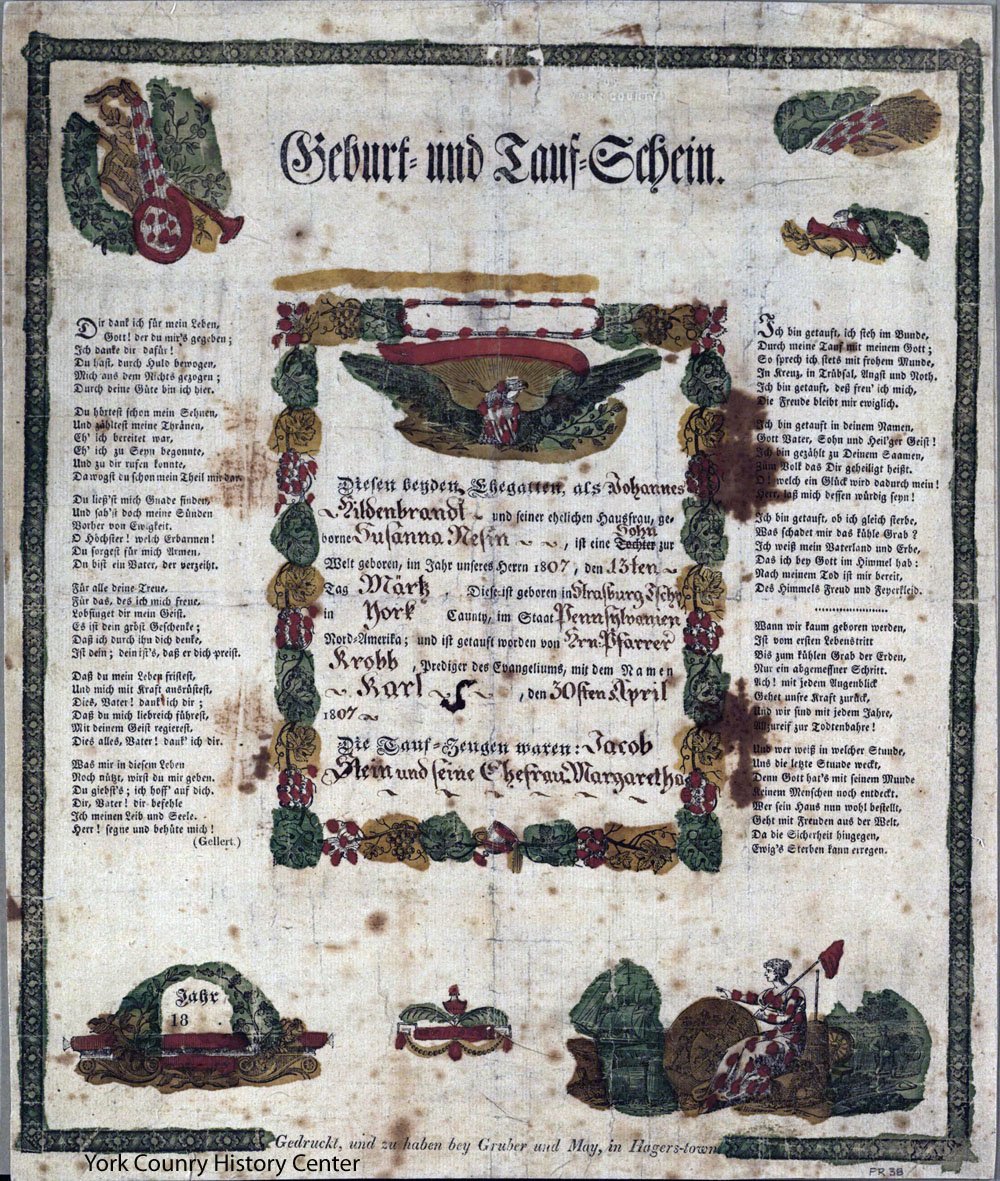 Do you have any birth and baptismal certificates printed in York County?

Some of you might be lucky enough to have Pennsylvania German birth and baptismal certificates that were done for family members well over 100 years ago.  Or you just might be intrigued by the art and design of these unique folk art documents and perhaps collect them.  I have written about some of the York County artists who created the hand done examples with their colorful hearts, flowers, birds and angels.  The majority of families, however, utilized printed forms to record such important events.  I am currently concentrating on further research on the few York and Hanover printers that seem to have conducted a brisk business in printing and selling these convenient forms.  Here is my recent York Sunday News column on York printer Daniel May:

One of my main research projects is on the Pennsylvania German birth and baptismal certificates (Taufscheine) created for York County area children.  They are classified as Fraktur for the style of lettering used on older Germanic documents.  Their popularity ranges the 1770s to the 1870s.  I have recorded over 2,000 of these colorful forms to date, filled in for children born in the York County area (York and Adams counties and adjacent northern Maryland).

Researchers have identified some artists who created hand done certificates.  These specimens, however, account for only about a quarter of local production in our area, with the rest commercially printed in black and white and then hand colored.  Printers in Reading and Harrisburg were most prolific; many forms from those areas were used to record York County area births and baptisms.  There was also significant output from area printers, however, specifically Hanover and York.  Dr. Klaus Stopp’s multi-volume work is the only major work documenting Taufschine printers.  (These volumes are available for research at the York County History Center Library and Archives.)  Using Stopp’s study as a starting point, I am presently researching the York County area printers, starting here with Daniel May (1783-1843) of York.

Until a century ago, when radio became affordable, followed by television and now the internet, printers were the sole source of the only media—newspapers.  That was how you found out what was happening in your town, the county, the state and the world.  Printers produced handbills, broadsides and books and printed essential blank forms.  The public sale held in 1843 to settle  Daniel May’s estate included books in German and English, music books and pamphlets.  The list also includes blank summonses, bonds, promissory notes, deeds, mortgages, and bills as well as hundreds of “birth certificates.”  Hundreds of the latter were sold at the sale in lots for 12 ½ cents a dozen, which would be less than $5.00 a dozen today.  Although a very small part of May’s printing business, it is for what he is probably most widely known today.

May seems to have been the son of Colonel Daniel May of Dover Township, a participant in putting down the Whiskey Rebellion.  Some sources have the younger Daniel learning the printing trade in Reading.  By 1813 he was in Hagerstown, Maryland, when he married Rebecca, daughter of printing partner Johannes Gruber (1768-1857).  Lancaster County native Gruber had  come there from Reading in 1796. They co-published the Hagerstown Town and Country Almanack, which is still being issued today by Gruber descendants.

The first known birth and baptismal certificate published by May was done in partnership with Gruber in Hagerstown, so the imprint dates back at least to 1829, when May and his young family moved to York.  The only known surviving example is in the collection of the York County History Center. The infill attests that Karl Hildenbrandt, the son of Johannes Hildenbrandt and wife, Susanna Nes, was born 13 of March 1807 in Strasburg [Shrewsbury] Township, York County.  He was baptized 30 April 1807 by Pastor Krobb.  The sponsors were Jacob Stein and wife Margaretha.

The Taufschein is printed in vertical format with an outer border of small tailpieces of type.  An inner ornate border of vines and grapes frames the block of text to be filled in, which is topped by an eagle and shield.  Verses of baptismal hymns common to many taufscheine are printed between these two borders.  It is also embellished with various sized graphics.   These cuts were used to decorate books, handbills and other printed items by various printers.  What is most interesting in this example is the larger cut on the lower right.  It shows a seated woman holding a pole with a liberty cap, a sailing ship, a soldier and an American flag on a round shield, a churn, a spinning wheel, farmers cutting grain and a shovel.  It is hard to see the details on the YCHC example because the colorist used a heavy hand.  You can see this graphic much better on the cover of the current Hagerstown Town and Country Almanack, along with the garland of grapes and vines and the eagle.  These exact same images that appear on the Taufschein have embellished the almanac cover since its founding in 1797.

In York Daniel May printed a vertical baptismal certificate, in German or English, and quite a few examples survive.  Aside from the language, the two editions are virtually identical, using the same tailpieces for the heavy outer border and the thinner inner border and the same multipurpose cuts for illustration.  Interestingly, Ludwig Kurtz printed a nearly duplicate Taufschein form in Shrewsbury.  Dr. Stopp dates Kurtz’s certificate to about 1845, a couple of years after the death of Daniel May, so Kurtz could have bought the cuts and tailpieces from May or his estate.

May was involved in publishing several newspapers in York, including Die Republicanische Herold and The York County Farmer.  He printed periodicals for the German Reformed Seminary when it was located in York in the 1830s. He also published several religious books here in German and in English, as well as the miscellaneous ephemera listed in his estate sale accounts.

This printer was well known in the community and served a term as Recorder of Deeds.  The local papers, even his rivals, published May’s March 1843 obituary, longer than most for the day.  It stated that he had “acquired the respect of a numerous circle of friends and acquaintances,” and “he was a kind husband; an indulgent parent; an exemplary citizen, an obliging neighbor and an upright man.”

If you have any 18th or 19th century birth and baptismal certificates, printed or hand done, I would love to record them for my research.  Please contact me at ycpa89@msn.com.