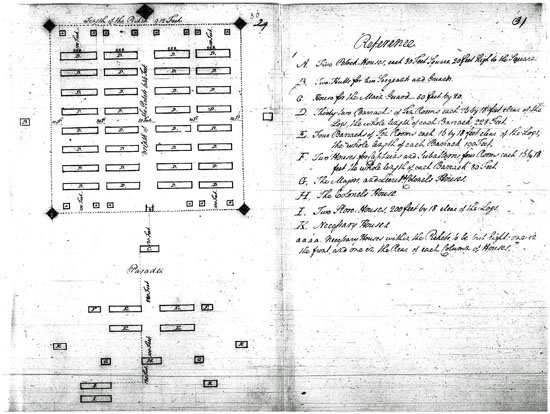 The public is invited by the Red Lion Area Historical Society to attend Jonathan Stayer’s program on Camp Security at 7:30 p.m. Thursday, March 22, 2012. It is at St. John’s UCC, 161 N. Main St., Red Lion (rear entrance). Stayer, Supervisor of Reference Services at the Pennsylvania State Archives, has been researching Camp Security for many years.

The original of the drawing above, “A Plan of the Barracks for the Convention Troops in Virginia, 1779,” is filed with papers of Nathanael Greene within The Papers of the Continental Congress at the National Archives. General Green was Quartermaster General at this time. The convention troops, surrendered by British General Burgoyne at Saratoga, N.Y. in 1777, were being moved from New England to Charlottesville, Va. and barracks were being constructed for the prisoners. (Click here for links to background on Camp Security and the convention troops.)

Over the years various sources have said that the stockade at Camp Security, built when British convention prisoners were moved here in 1781, might have followed a similar plan, only perhaps smaller. There is also speculation that there might have been more than one stockaded area at Camp Security. The British detained here came in two major waves: the convention troops in August 1781 and then more British surrendered by General Cornwallis at Yorktown, Va., arriving very early in 1782.

Further historical research and archaeological exploration will answer many questions about Camp Security, the only remaining Revolutionary War era prisoner-of-war site that has not been completely developed. Springettsbury Township, with the help of York County, the Conservation Fund, Friends of Camp Security and others obtained a large portion of the tract (known as the Rowe farm) for preservation in 2011. The hope is that another large portion (the Weist farm) will similarly be saved, allowing for further exploration.

The Virginia camp may have looked like the illustration below: