Did York County have a branch of the American Protective League? 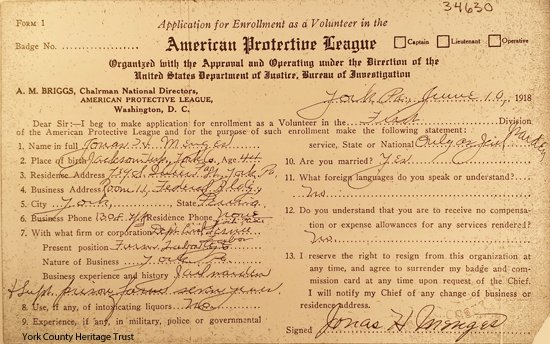 I didn’t know what the American Protective League was until I was recently asked if there was any information on it in the files at the York County Heritage Trust Library/Archives. This World War I era organization, eventually growing to around 250,000 members, signed up citizens to keep an eye on possible German sympathizers.

A few years ago Hake’s Americana and Collectibles auction (based right here in York) sold a metal APL badge along with a letter dated July 27, 1917, described as: “Letterhead reads ‘Department Of Justice/Bureau Of Investigation/Philadelphia.’ Upper left reads ‘Frank L. Garbarino/Special Agent In Charge.’ Body of letter certifies that Mr. Lukens has been ‘Designated By The Officers Of The American Protective League To Visit Cities In The Vicinity Of Philadelphia To Organize Local Branches Of The Said League.’”

The auction description also states: “The American Protective League was formed shortly after the US entered WWI. It earned semi-official status in the national surveillance game, in time growing to enormous size. The league was one of many organizations created to search out disloyalty in schools and the community. The members became volunteer spy hunters.”

So far I have found just one related document at YCHT, but it is an interesting one. It is an application of Yorker Jonas H. Menges, presently (June 10, 1918) a farm laborer, but having had experience as “Jail warden & Supt. prison farm seven years.” 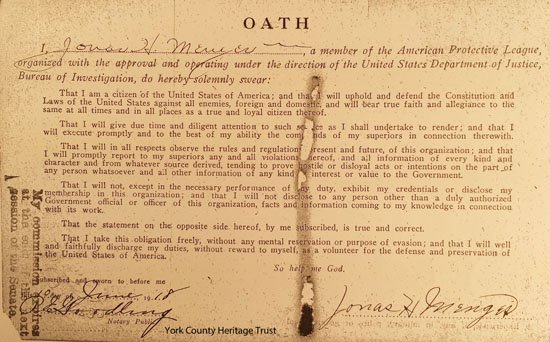 The signed and notarized oath on the back of application starts out: “I, Jonas H. Menges, a member of the American Protective League, organized with the approval and operating under the direction of the United States Bureau of Investigation, do hereby solemnly swear:…”

The inductee then swears that he is a citizen of the United States, to uphold the U.S. laws, to be diligent and promptly execute commands of superiors, and report any “hostile or disloyal acts or intentions” and “all other information of any kind of interest or value to the Government.”

The next paragraph of the oath addresses secrecy. It reads: “That I will not, except in the necessary performance of my duty, exhibit my credentials or disclose my membership in this organization; and that I will not disclose to any person other than a duly authorized Government official or officer of this organization, facts and information coming to my knowledge in connections with its work.”

He further attests to the truth of the personal information on the front of the application and that he “will well and faithfully discharge my duties, without reward to myself, as a volunteer for the defense and preservation of the United States of America.”

If anyone has any further information on the American Protective League in York County, please let me know.