Did colonial courthouse windows end up in the Dover area? 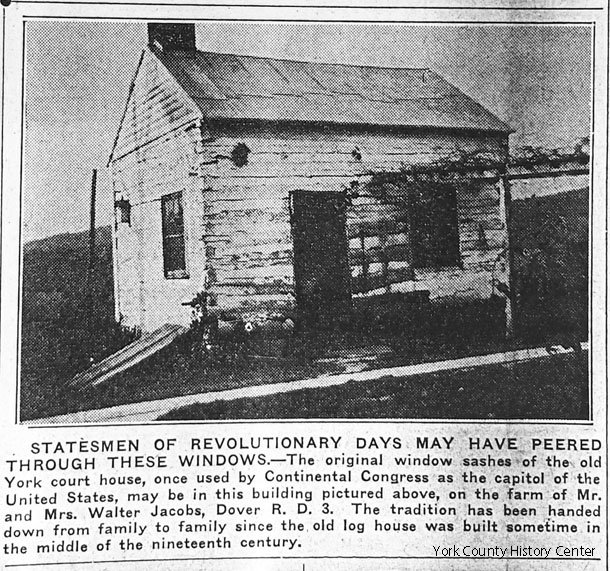 See below for the transcription of an interesting clipping from the September 23, 1937 York Gazette and Daily found in the York County History Center files. It reads:

Log Cabin on Dover Farm Believed to Have Windows from Old Court House. Tradition Says House Built About 1846 Contains Original Sashes of Historic York Building, Once the Capitol of the United States.

Dover, Sept 11.—A small log building, 14×16 feet, situated on the farm of Mr. and Mrs. Walter Jacobs, Dover, R.D. 3, near Bethany United Brethren church, contains three windows that were in the old court house in Continental square in York, according to tradition.

These windows are of two sashes, with eight panes to a sash and are in a good state of preservation, considering their age. The house is of log construction, with a plaster filler between the logs, and formerly had an oak shingle roof, but during the past few years a tin roof was placed on the building.

According to records, John and George Daron, administrators of the estate of George Daron deceased, sold to John Coleman the land on which the building now stands, in 1846. Between 1846 and 1867, John Coleman built the present building, which according to tradition, has the windows from the old court house, once the capitol of the United States. In 1867 the property was sold to Ephraim and Rebecca Messerly and in 1881 Henry Shaffner purchased the property. William Jacobs, father of the present owner, purchased the property from Henry Shaffner and in 1931 it became the property of Walter Jacobs, present owner.

Working with the 1876 Beach Nichols Atlas of York County maps of Dover and Conewago Townships and the Shearer & Lake 1860 wall map, as well as Google Maps, the site of the log house seems to be on Butter Road, just northeast of Bull Road.  Bull Road is the boundary between the two townships.

Although it is a newer building, I am assuming that the present Bethany United Methodist Church is on the site of Bethany United Brethren, mentioned in the 1937 clipping as being nearby.  Also, E. Messerly is clearly marked on the 1876 map of Conewago Township, and the first York County courthouse was demolished in 1841, a few years before this small house was allegedly built.

I ran this by a friend that lived in the immediate area, and she knows of no building that might be, or have incorporated into it, the small cabin described in the 1937 article; it probably no longer stands.