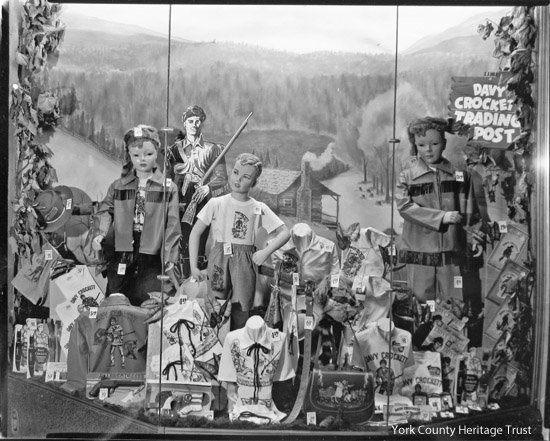 This photo is from York County Heritage Trust’s Simon Photography collection. The window display is of one of York’s many 5 & 10 cent stores, probably McCrorys near the square in the first block of West Market Street.

The Davy Crockett phenomenon started out in 1954-55 with just three hour-long episodes planned for Walt Disney’s Disneyland (later Wonderful World of Disney) television series. It was based on the real David Crockett (1786-1836), frontiersman and congressman from Tennessee who died at the Alamo.

The shows proved so popular that more installments were made over the next several years. Fess Parker, as Davy Crockett, became a star and also recorded the hit Ballad of Davy Crockett.

It also was an instant merchandising opportunity, as can be seen above. The prices seem really cheap, until you consider what wages and salaries were nearly 60 years ago. You might not be able to make them out in the photo, so I’ll list some of them:

Did you have any of the Davy Crockett clothing or toys? Still have some tucked away in the back of a closet or attic?

Click here to see what toy trucks were offered by McCrorys in the fifties.