Cross and Crown lit up York Square in 1913 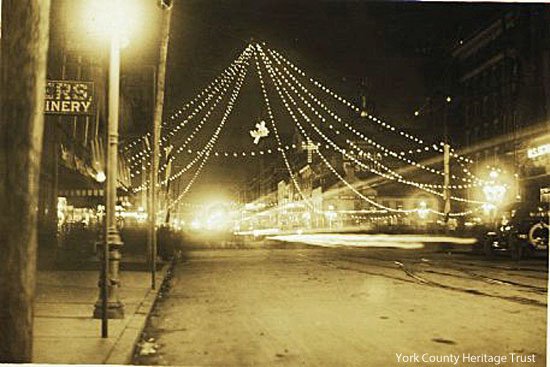 We’ve seen illuminated objects hang over York’s Center/Centre/Continental Square, usually stars, once ever a glittering chandelier, in celebration of Christmas. But what occasion merited the square decorations depicted above nearly 101 years ago, much earlier than any photos I have seen of Christmas decorations?

The York Gazette of May 26, 1913 provides the answer. Secret societies were in there heyday during the latter part of the 19th century and well into the 20th century. York went all out hosting the Sixtieth Annual Conclave, Grand Commandery of Pennsylvania, Knights Templar in May 1913. They really lit up the town:

After working night and day York’s holiday dress in honor of the visit of the Pennsylvania Sir Knights was completed at 7 o’clock last evening and when nightfall came and the thousands of lights were turned on, Centre Square and the streets leading to it was a solid blaze of light and waving colors. The rainy weather of the past week hindered the decorators to a great extent yet when the time arrived all had been completed and the reputation that this city has gained for doing things has again been upheld.

Of course the big attraction is in Centre Square. The court of honor is illuminated by long strings of electric lights all leading to the centre where the big cross and crown is suspended. At each entrance to the square is suspended a large red cross of electric lights, while connecting the ornamental standards along the curbing is another long string of lights making a beautiful effect.

Few of the business houses and hotels in and about the centre of the city are without decorations of some kind. The black and white streamers and bunting are used with the flags and streamers, while emblems of various kinds are displayed on every hand. The Rosenmiller building on West Market Street is entirely decorated with long strings of electric lights. On South George Street Lancaster Commandery No. 13 has hung its large cross and crown illuminated with hundreds of lights. Another pretty scene is at the court house where the reviewing stand is located.”

An adjacent, more general, article also enthuses over the electric lights, noting that: “The gleaming ruby red crosses stood out amid a sea of glittering star-like lights that made one wonder at the possibilities of electrical illumination.”

The photo above was taken from the first block of West Market Street. Just to the right of the big cross and crown in the center of the square, you can see the “gleaming ruby red cross” at the entrance to East Market Street.