How to keep away conflagrations, dire epidemics and pestilence 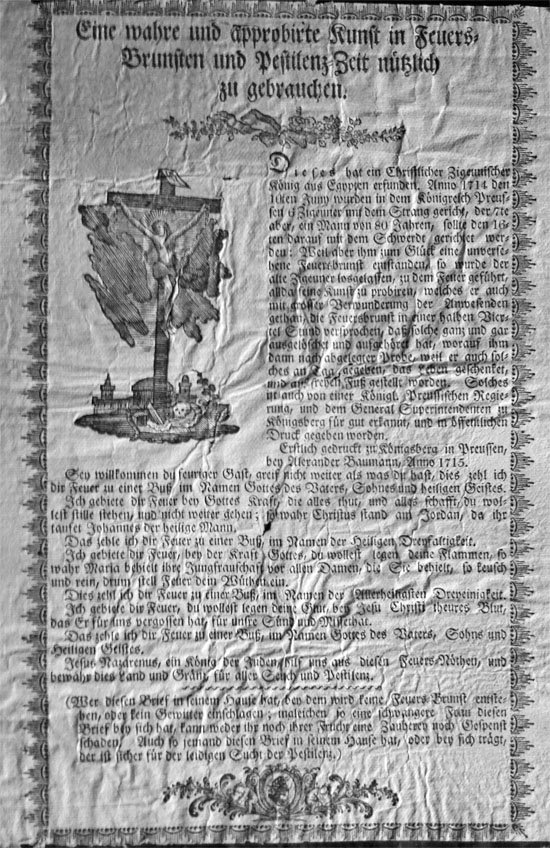 The field of folk belief among our Pennsylvania German ancestors is a rich one, replete with words. Certain rituals go along with many practices used for healing known as pow-wow, but the words are also specific for each one. They are readily available in books such as John George Hohman’s The Long Lost Friend, probably purchased today mostly as a curiosity. I doubt that it has been out of print since it was first published in 1820.

Charms written by hand on little slips of paper seem to have been fairly common. In a previous post I showed a charm for good luck while hunting game. A friend found that scrap of paper rolled up and inserted in the stock of his grandfather’s shotgun.

Many editions of broadsides printed in German were produced and sold in the Pennsylvania German region, including York County, during the 18th and 19th century and perhaps later. Examples of these larger documents could be house blessings and “letters from Heaven” warning away all kinds of disasters. A friend recently shared the fire charm above, probably from a York County printer. See below for my recent York Sunday News column, which includes further description and translation:

Pennsylvania Germans were, and in some cases, still are, a religious lot. Many believed in the power of healing by faith in God. Braucherei, or pow-wowing, is one aspect of this belief, using ritual and charms for healing and protection while giving God credit. An entwined component is printed broadsides, still to be occasionally found at antique shops and public sales. These include Himmels-Briefe (Heavenly Letters) and House Blessings. Many historical archives, including York County Heritage Trust, have original examples in their collections. Depending on their purpose, they could be kept in the home or carried on your person.

Although not as common as some of the other blessings and charms, fire charms can also be found in York County. A friend recently shared an original fire charm with me, noting that it was a form of “fire insurance,” for some of the groups of Pennsylvania Germans (also known as Pennsylvania Dutch) who settled in southeastern and southcentral Pennsylvania, including York County. Printers sometimes didn’t include their imprint on the broadsides they printed, but, working with identified imprints, the printer can sometimes be identified by the typefaces and type cuts (carved wood blocks or cast metal designs) used by known printers. Some early 19th century York County printers produced several kinds of broadsides, probably including fire charms. I have seen the crucifixion cut and the little tailpieces used to make the border on this piece on birth and baptismal certificates printed by Daniel Philip Lange and his successors in Hanover.

No matter who the printer was, the text is very similar in just about all editions. A translation of the most popular fire charm is below. This translation is taken from The Pennsylvania German Broadside: A History and Guide, by Don Yoder, who it turn obtained it from an 1875 English edition of Albertus Magnus: Egyptian Secrets, published in Harrisburg. Some editions have an additional title at the top: “Eine wahre Geschichte,” or “A True Story,” perhaps to give the charm more validity. Some also start out crediting the invention of the charm to a “Christian Singing Master, King of Egypt” instead of a “Gypsy King of Egypt.” It reads:

“An Approved Method to Turn Conflagrations and Epidemics to Usefulness

The following is the invention of a Gypsy King of Egypt, who confessed Christianity. Anno 1714, on the 10th day of June, there were executed, in the kingdom of Prussia, six gypsies, by suffering death on the gallows; the seventh of them, however, a man of 80 years, was condemned to be beheaded on the 16th of the month. But a conflagration taking place, meantime, turned to be good luck for the aged man. He was liberated, and taken to the scene of the fire, for the purpose of having him try his arts and mysterious workings. What he accomplished, to the great astonishment of all present, he stayed the conflagration by a miracle, within the brief period of a quarter of an hour, and for this deed he was pardoned, and entirely liberated. Such was approved by the Royal Prussian Government and the Superintendent General at Koenigsberg, and made public in print.

Thou art welcome, thou fiery guest, do not grasp further, but spare the rest.

That fire I count to the ransom, in the name of the Father, the Son and the Holy Ghost.

I command thee, fire, by the power of God, who does all things well, and all things creates, that thou wouldst stand still, and not further proceed: as true as Christ stood in the river Jordan, when he was baptized by Holy Saint John; that I count to thy ransom, oh, fire, in the name of the Holy Trinity.

I command thee, fire, by the power of God, that thou wouldst allay the flames, as true as Mary remaineth so chaste and pure; for this cease thy rage, oh terrible fire. This I count to thee, oh fire, for ransom’s sake in the name of the Holy Trinity.

I command thee, fire, thou wouldst thy violent heat allay, for the blood which he shed for our sins and his death. All this I accept as a ransomed for thy sake, in the name of God the Father, the Son and Holy Ghost.

Jesus Nazarenus, King of the Jews, help us out of these dangers of fire, and protect this land and its borders from all epidemics and from pestilence.

Whoever keeps this letter in his house, he will not suffer from conflagrations, and if any pregnant woman carries this letter on her person, no sorcery, apparition or witchcraft can harm her. Also everyone who keeps this letter at home or carries the same on his person will be secure from dire epidemics and pestilence.”

———–
Note that the ending paragraph doesn’t say that the Feuer-Briefe (literally translated fire letter) has to be displayed to be effective. As long as you had it in the house or on your person, the protection was supposed to be effective. In their book, Flying Leaves and One-sheets: Pennsylvania German Broadsides, Fraktur and Their Printers, Corinne and Russell Earnest state that they have been told that some fire charms were kept by the entrance door in a stoppered bottle. These may have been shorter, hand-written charms that were to be repeated while running around the house three times in case of fire. The Earnests canvassed many archives and private collections and determined that most of the examples of broadside Feuers-Briefe they discovered were printed in the first half of the 19th century. These probably grew out of the shorter charms, written on small pieces of paper by the mid-18th century.