Confederate invasion of York County no longer a rumor. 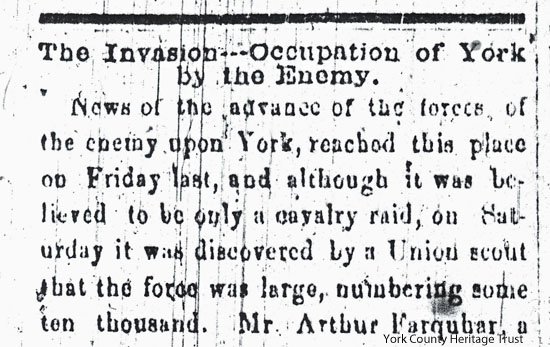 They really had come. York was occupied by thousands of Confederate troops. When the columns of soldiers marched into town that Sunday morning, the 28th of June, it was finally realized by all that the warnings and alarms were real this time.

The York Gazette came out with their regular Tuesday edition two days later, June 30, with a lengthy account of the occupation. The first of three segments of that report is transcribed below:

The Invasion–Occupation of York by the Enemy.

News of the advance of the forces of the enemy upon York reached this place on Friday last, and although it was believed to be only a cavalry raid, on Saturday it was discovered by a Union scout that the force was large, numbering some ten thousand. Mr. Arthur Farquhar, a citizen of this place, entered their lines some distance from town and obtained permission to inform the citizens of York of their approach, on the condition that he should return to their command and inform them whether or not our forces would make any resistance to the occupation of this place.

A meeting of the Safety Committee was called, and it was then determined, on account of the strong force of the enemy, to make no resistance; and Chief Burgess Small and George Hay, Thomas White, and W. Latimer Small, members of the Committee, accompanied by Mr. Farquhar, went out to meet the advance to inform them of the decision of the Committee, and ask the protection of the private property and unarmed citizens.

They met General Gordon, or Early’s division, and informed him that having no sufficient force to resist their advance they were authorized to ask that no injury be done the citizens, in their persons or private property. General Gordon heard their request and assured them that no injury should be done to either.

On Sunday morning about ten o’clock the vanguard of the enemy approached in three columns, the centre through Main street. Gordon’s brigade passed through town and encamped on the turnpike about two miles east of town. General Early next arrived with another brigade, of his division, and after an interview with the Chief Burgess took possession of the Fair Ground and Government Hospital. Thither the forces were stationed with their Artillery, consisting of some fourteen pieces, together with their infantry, mounted riflemen, cavalry, &c. Head-Quarters were established in the Court House, Gen. Early occupying the Sheriff’s office, the Provost Marshal the Register’s office, and other members of the Staff of the General commanding other offices.

Next time: Early’s demands for food, clothing, shoes and money:

This link will take you to all my Civil War related posts.

York County Heritage Trust’s major exhibit: The Fiery Trial: York County’s Civil War Experience had a very successful opening this weekend. It can be visited from 10 a.m. to 4 p.m. Tuesdays through Saturdays at 250 East Market Street, York. There will be special hours July 4th from 10 a.m. to 2 p.m. with half price admission. There is no charge for members, and memberships are always available.