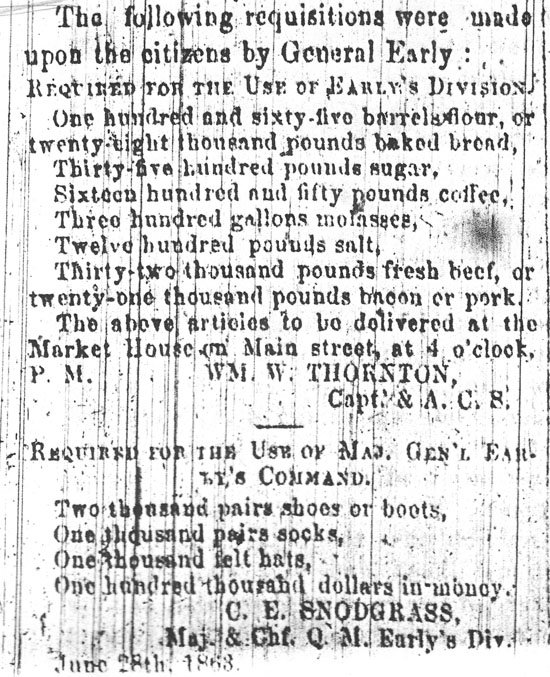 This the second of a three part series of posts chronicling the June 30, 1863 York Gazette coverage of the occupation of York by Confederate troops 150 years ago. General Early was very specific about what he expected for sparing the town. Reports were also coming in from other parts of the county, such as Wrightsville and Hanover Junction.

The following requisitions were made upon the citizens by General Early

June 18th, 1863.
Approved, and the authorities of the town of York will furnish the above articles and the money required, for which certificates will be given.
J.A. EARLY
Maj. Gen’l Commanding.”

A Meeting of the citizens was called and every effort was made to fill the requisition. Upon the representation of the Committee appointed to see to the obtaining of the required articles, that they had done the best in their power to do, General Early signified his satisfaction and agreed to accept their offer.

On Sunday afternoon Gordon’s Brigade reached Wrightsville and after a slight skirmish our forces consisting of several regiments of New York and Pennsylvania militia fell back across the Susquehanna, destroying the bridge in their rear by fire. The fire was distinctly seen from town and we regret to learn destroyed a considerable portion of both Wrightsville and Columbia. We have not yet reliably heard the extent of the loss, but hope it is exaggerated.

On Sunday the bridges on the Northern Central Railway north to near Harrisburg and south to below Hanover Junction were burned by the enemy’s forces. We are also informed that some bridges on the Wrightsville Rail Road were burned, and the large bridge over the Conewago on the Harrisburg turnpike.

Last evening General Early visited the Rail Road property and machine shops in this borough, in company with the Chief Burgess and other citizens to see what should be destroyed, but upon their urgent request abstained from burning them because their destruction would have endangered the safety of the town. General Early immediately issued the following address to the people and ordered it to be printed:

“YORK, PA. June 30th, 1863.
To the Citizens of York:
I have abstained from burning the rail-road buildings and car shops in your town, because after examination I am satisfied the safety of the town would be endangered; and, acting in the spirit of humanity which has ever characterized my government and its military authorities, I do not desire to involve the innocent in the same punishment with the guilty. Had I applied the torch without regard to consequences, I would have pursued a course that would have been fully vindicated as an act of just retaliation for the many authorized acts of barbarity perpetrated by your own army upon our soil. But we do not war upon women and children, and I trust the treatment you have met with at the hands of my soldiers will open your eyes to the monstrous iniquity of the war waged by your government upon the people of the Confederate States, and that you will make an effort to shake off the revolting tyranny under which it is apparent to all you are yourselves groaning.
J.A. EARLY
Maj. Gen’l C.S.A.”

This link will take you to all my Civil War related posts.

York County Heritage Trust’s major exhibit: The Fiery Trial: York County’s Civil War Experience had a very successful opening. It can be visited from 10 a.m. to 4 p.m. Tuesdays through Saturdays at 250 East Market Street, York. There will be special hours July 4th from 10 a.m. to 2 p.m. with half price admission. There is no charge for members, and memberships are always available.